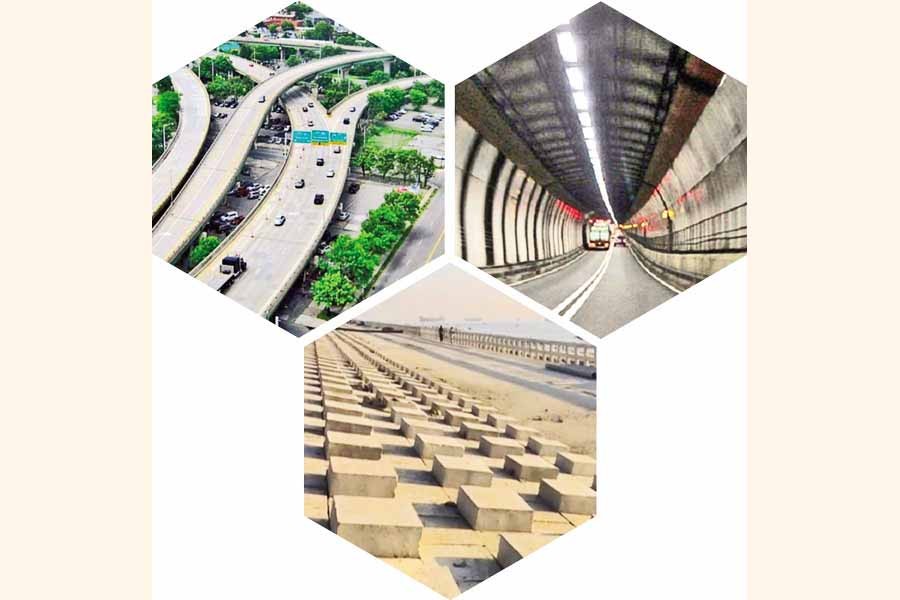 The major development projects of Chattogram were hampered by the coronavirus outbreak in the current year. During the government-enforced lockdown periods early this year due to the Covid-19 outbreak, the progress in work almost came to a halt. But, after the holidays, the work on the major projects resumed again and now is going on in full swing.

Karnaphuli Tunnel: The Karnaphuli Tunnel Project is a dream project of the country. This is the first tunnel in Bangladesh under a river. When implemented, this project can change Chattogram by connecting the south and north portions of the district. Already 60 per cent of the work has already been completed.

He said, "Around 3.0 work was completed during the corona outbreak. However, "52 per cent construction work on the Karnaphuli Tunnel Project was completed before the outbreak. Presently, more than 60 per cent work has been completed."

He said that if the corona outbreak continued for a long time, the construction work might be delayed and would not end on schedule in 2022 next.

Prime Minister Sheikh Hasina inaugurated the excavation under the Karnaphuli river on February 24 in 2019. Deputy Minister of Education Barrister Muhibul Hasan Chowdhury MP proposed naming the first ever tunnel of the country as Bangabandhu Tunnel in a cabinet meeting. The cabinet meeting and Prime Minister Sheikh Hasina agreed on the proposal. So, the first ever tunnel of the country will be named as Bangabandhu Tunnel.

The total length of the proposed tunnel will be around 9.092 kilometres including 3.40 kilometres under the Karnaphuli River with an approach road of 4.89 kilometres alongside 740 metres of bridges linking the main port city and western side of the Karnaphuli along with the heavy industry-prone eastern side of the river. The tunnel will cut the road distance between Chattogram and Cox's Bazar, apart from facilitating the heavy traffic on the Dhaka-Chattogram Highway entering the port city to go to other parts of Chattogram division.

The multilane tunnel route will pass through the river close to Navy College on one side and Korean Export Processing Zone (KEPZ) and Karnaphuli Fertiliser Company (KAFCO) on the other. The tunnel will connect Chittagong Port and Anwara upazila and is expected to make communication between Chattogram and Cox's Bazar easier. It will also ease traffic congestion on two bridges over the Karnaphuli River.

Chattogram Development Authority (CDA) Chairman Jahirul Alam Dovash said, "Around 38 per cent work on the Elevated Expressway project is already completed till now. Meanwhile LGRD minister visited the project and expressed his satisfaction over the progress in the project work."

The project is expected to be completed by 2022.

The elevated expressway will comprise 450 pillars and 24 ramps at nine points and it will help reduce traffic congestions. All major intersections on the CDA Avenue, the city's main street, will be connected with 24 ramps on the left and right of the expressway so that passengers can reach their destinations quickly. There are six entry and exit gates of the Chittagong Port Authority for cargo and container transport from Barik Building area to Saltgola Rail Crossing area.

The Executive Committee of the National Economic Council (ECNEC) approved the mega project, the first of its kind in Chattogram, in July 2017. The project involving Tk 32.50 billion (3,250.84 crore) is implemented with the government's fund.

MEZ: MEZ styled as Bangabandhu Sheikh Mujib Shilpa Nagar is being developed on an adjoining 30,000 acres of land. The MEZ will be ready with its own seaport and an airport will be built along with the seaport to speed up transport of goods. The MEZ project received around USD 15 billion investment proposals so far. Now, 11 factories are under construction. By 2021, 20 companies will start factory construction. Yabang Group will invest $1.0 billion in the allotted

Considering the aspects that the MEZ will serve as a major investment area for the garment sector, Bangladesh Economic Zones Authority (BEZA) is planning to add another 13,000 acres to 30,000 acres.

The ongoing MEZ (first phase) was cleared to build 250 plots initially. But the Export Processing Zones Authority (BEPZA) has proposed that 539 industrial plots be readied since the authority believes such a measure will ensure $2.7 billion in investments and will generate 400 thousand (4 lakh) jobs. The number of industrial plots at the MEZ will increase due to demand from both local and foreign investors. Meanwhile, a revised project proposal from BEPZA has already been sent to the Planning Commission in this regard. According to the revised proposal, the project cost will go up to Tk 13.50 billion (1350.38 crore) from the original Tk 7.50 billion (750 crore).

Ring Road: The construction work on the much waited Coastal Road popularly known as Ring Road has seen almost 80 per cent progress and the rest of the work is likely to be completed within six months. The Ring Road is likely to open to vehicles next year. The Project Director and also Chief Engineer of Chattogram Development Authority (CDA) Engineer Kazi Hasan Bin Shams said, "The 86 per cent work on the Ring Road has already been completed."

He said, "Despite the schedule of completing the work in 2019, the project is likely to be completed next year as the acquisition of some land is delayed. The road can be opened in June next."

He said, "We are working to complete the work of connecting roads now. After completing the connecting roads, the Ring Road will be opened formally after June of next year."

After completing the Ring Road project, it will help save the Chattogram EPZ, Karnaphuli EPZ, Chattogram Port, Chattogram Shah Amanat International Airport, Naval and Air Force's establishments and other key establishments as well as the people of the area from natural calamities including tidal surge and cyclone. Besides, the traffic pressure of Chattogram city will be significantly reduced and industries especially tourism industry will flourish after completion of the project.

The CDA is implementing a Tk 14.96 billion Coastal Road Construction and Embankment Strengthening Project, also known as Chattogram Outer Ring Road Project. The project was approval by the Cabinet Committee of Government Purchase (CCGP) on March 4 in 2016.

Under the project, a 15.2 kilometre road is being constructed on the existing coastal embankment connecting Patenga to Sagorika Industrial Area in the city. The road would strengthen the coastal embankment and raise its height from existing 23-24 feet to 33-34 feet.