A stable, poverty-free Bangladesh in the making 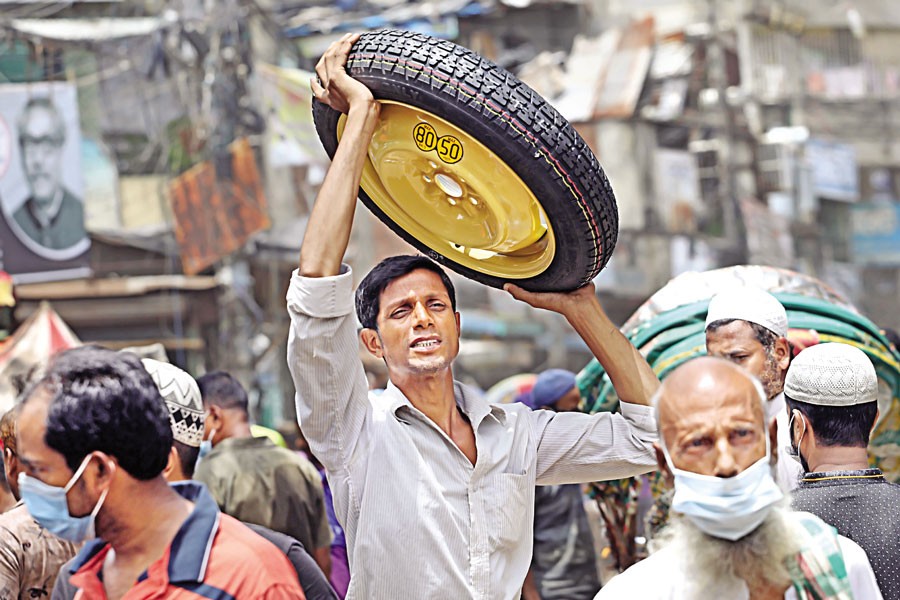 The FACE OF RESILIENCE: The people of Bangladesh have smarted from the Covid-induced shutdown to drive the economic recovery — FE Photo

The present government believes in a coordinated and constructive engagement that assists in building up a hunger-free country where there will be no trace of communalism, terrorism or fundamentalism either. This scenario, it is believed, will be critical for Bangladesh to emerge as a middle-income country and thereafter as a developed one, through the process of graduation from its LDC status.

Recently, while addressing members of the Bangladesh Civil Service at the Bangladesh Civil Service Administration Academy, Prime Minister Sheikh Hasina drew attention of the bureaucrats to certain specific areas which will help the country to move towards stability and also increase respect for our country from different dimensions. She also drew their attention to Article 7 and Article 21 (2) of the Bangladesh Constitution and underlined that the citizens of the country are the owners of Bangladesh and that government employees needed to serve them at all times. There was a need for this aspect of governance to be remembered by all government servants.

Reference was made to a hard fact that food scarcity increased around the world and this was casting a long shadow on different populations. In this context, it was correctly stressed that not a single inch of arable land in Bangladesh should be left uncultivated. Instead, everyone concerned within the administration should make efforts not only to increase growth in food production but also in the cultivation of diversified new varieties which can then be added into our export basket. In this regard, it was also recalled how Bangabandhu had devoted his entire life towards changing the fate of the people by giving them the necessary help to emerge out of poverty and destitution.

Such belief and optimism about our economic growth and development has been greatly bolstered through some recent assertions by international institutions.

This has been reflected in the observations recently released by the Standard Chartered's Global Research Team. They have announced that Bangladesh will have a compelling growth story and a USD 500 billion economy by 2026. This will happen because, according to them, Bangladesh will continue to grow at over 7 per cent in the next four fiscal years. At that time our per- capita GDP will be 3,000 US dollars. It was also reiterated by Saurav Anand, Standard Chartered's economist for South Asia, that "Bangladesh's economy is set to accelerate after a speed bump, with GDP growth forecast at 5.5 per cent in FY21 and 7.2 per cent in FY22. The momentum will be driven by an export-demand rebound, strong remittance inflows and public investment." However, it was also underlined that policy support is a prerequisite for a smooth transition to middle-income status. Eric Robertsen, Standard Chartered's global head of research and chief strategist, said, "While the pace and distribution of global recovery remains highly uneven, Bangladesh has made a strong comeback with one of the highest GDP growths in the world in 2020. However, it has also been pointed out that a robust vaccination programme and implementation of strategic infrastructure projects were necessary to further increase momentum towards the nation's LDC graduation. 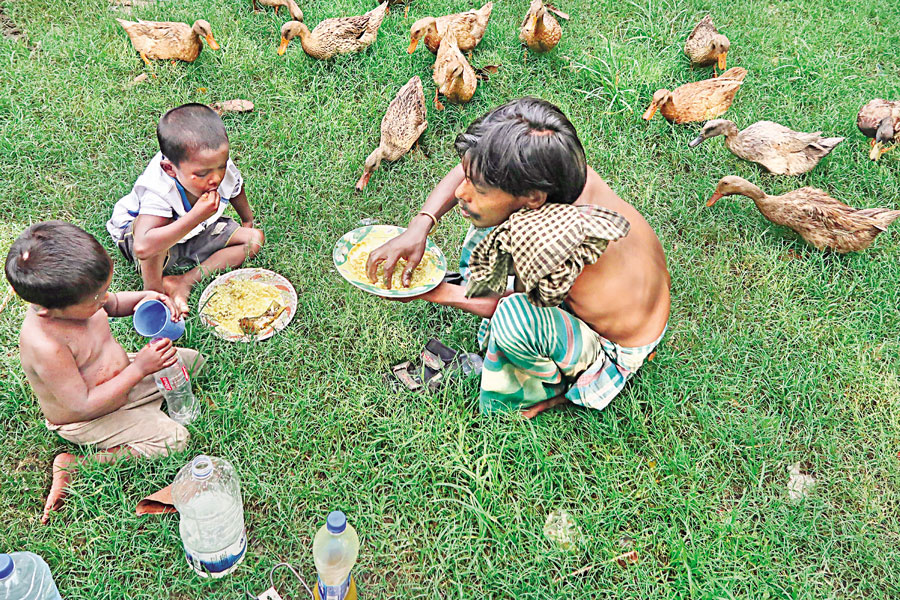 A poor man shares food with his children in Dhaka: Bangladesh is ranked 76th in the Hunger Index of 2021, far ahead of India placed in the 101st position — FE Photo

Such an appraisal indicates that the rest of the world believes that Bangladesh, in its journey of socio-economic development, has belief in resilience and in the fostering of a business-friendly inclusive climate that will and can lead to prosperity. One needs to note here that all of this will be possible if we introduce within this paradigm technology adoption and technology inclusiveness through mobile-based solutions and also growth-supportive policies that will continue to spur private investment and FDI.

Within this emerging matrix, one also has to recognize recent observations that have been made in the first-ever Bangladesh Business Climate Index 2021 (BBX-2021) launched a few days ago by the Metropolitan Chamber of Commerce and Industry (MCCI) and Policy Exchange, Bangladesh (PEB). The index has been made based on findings of a survey conducted on more than 1,000 firms across eight divisions in the county.

It has been stated that Bangladesh has made significant progress in improving the country's business environment to attract domestic and foreign investment. It has been pointed out that in four pillars - access to infrastructure, starting a business, labour regulation and payment - Bangladesh has demonstrated progress. It is now agreed that macro-success has filtered down to micro-achievements, while Bangladesh is gradually developing a meaningful administrative and production- support system. Nevertheless, economic analysts have also drawn attention to the need for improving trade facilitation, finance barriers, and facilitation of technology adoption. If these factors can be properly handled, it would help in the expansion of both small and large businesses.

It has also been underlined that regulatory and institutional improvements will also need to be continually made to ease the business environment for entrepreneurs on an ongoing basis. Another bottleneck has been identified. This relates to the difficulty being faced by the ready--made garment sector in obtaining land compared to firms in several other sectors. Scarce availability of land is preventing many potential entrepreneurs from setting up operations in these two growth centres.

The World Bank has also been part of this evolving positive scenario. Recently they have forecast in their latest report that, with continued recovery in exports and consumption, Bangladesh's economy is expected to grow by 6.4 per cent in Fiscal Year 2021-22. In line with the projection, exports are expected to grow by 9.4 per cent while imports by 7.7 per cent. The agriculture sector is expected to see a 4.1-per cent growth followed by industry 8.1 per cent and service sector 5.6 per cent.

Similarly, private consumption will rise by 5.5 per cent and public consumption 8.7 per cent. This projection in its newest report on South Asia Economic Focus titled 'Shifting Gears: Digitization and Services-Led Development' has noted that - "A gradual recovery is expected as Bangladesh navigates the persistent effects of Covid-19." The GDP growth is also forecast to accelerate to 6.9 per cent in FY23 as exports and consumption continue to recover. Economic analysts have, however, rung an alarm bell over another important factor- the surge in official remittance inflows is unlikely to persist if the net outflow of migrant workers slows in FY22 and if the use of formal payment channels declines. In this regard it has also been stated that the demand for Bangladesh's migrant workforce in the Gulf countries may be impacted by the ongoing recession in that region, impairing future remittance inflows.

The World Bank, keeping in mind what has emerged in the recent past in several countries in Africa and also in Bangladesh, has also warned that certain risks need to be seriously addressed by Bangladesh authorities. Their report mentions that "sustaining the economic recovery and reducing poverty further will depend in part on mitigating economic scarring through targeted support to vulnerable businesses." This advice has been given because in the financial sector, contingent liabilities from non-performing loans combined with weak capital buffers could necessitate recapitalizations of state-owned banks and depress credit growth.

Against this backdrop, it is necessary to refer to what this international financial institution has remarked about the rest of South Asia. India's economy, South Asia's largest, is expected to grow by 8.3 per cent in the Fiscal Year 2021-22 aided by an increase in public investment and incentives to boost manufacturing. In Nepal, GDP is projected to grow by 3.9 per cent, in Bhutan 3.6 per cent, in Pakistan by 3.4 per cent and in Sri Lanka 2.1 per cent. The main reason for this appears to be the fact that the pandemic is estimated to have caused 48 to 59 million people to become or remain poor in 2021 in South Asia.

Zahid Hussain, former lead economist of the World Bank's Dhaka Office, has made an interesting observation about the assumptions in the World Bank report: "Recovery is happening now, especially in the labour-intensive sectors. Now, it turns out that the possibility of going to the pre-pandemic level is quite bright. But there is a risk in the form of a hike of commodity prices. If the inflation rate rises to 8-9 percent, there could be an impact on poverty. The way energy prices are increasing on the international market, it could have an impact on poverty also. This will increase people's income but will reduce their purchasing power." Apparently, according to him, this rise in energy prices is not due to a shortage of production, but mainly due to supply disruption. This means that the price hike is likely to become normal in the next six-seven months.

It would be impractical to conclude these developments without referring to the worthwhile measures being adopted by Bangladesh pertaining to nature-based solutions in its fight against climate change. It has to be remembered that a nature-based approach is the most effective way to tackle biodiversity loss, climate change and also achieve sustainable development.

The country has adopted a green- growth strategy in its 8th Five Year Plan and Bangladesh Perspective Plan 2021-2041 not only to harmonise economic growth with environmental sustainability but also to create a climate-resilient nation. It needs to be underlined that the government has adopted the Bangladesh Delta Plan 2100 to achieve a safe, climate-resilient and prosperous delta by ensuring long-term water and food security, economic growth, environmental sustainability while effectively reducing vulnerability to natural disasters and building resilience to climate change. To reduce GHG emissions, Bangladesh has also revised and submitted Enhanced Updated NDCs to enhance both the unconditional and conditional contributions with ambitious quantifiable mitigation targets. The Mujib Climate Prosperity Plan 2030, finalized by Bangladesh, has also recognized the spinoff benefits of maximizing share of renewable energy, enhancing energy efficiency and giving importance to climate-resilient nature-based approaches to development. These are significant measures.

One can only hope that the people of Bangladesh will work together to move forward without politicizing each initiative. This will also need accountability and transparency in decision making.

(Muhammad Zamir, a former ambassador, is an analyst specialized in foreign affairs, right to

information and good governance. He can be reached at <[email protected]>)