Crony capital: Should we be worried? 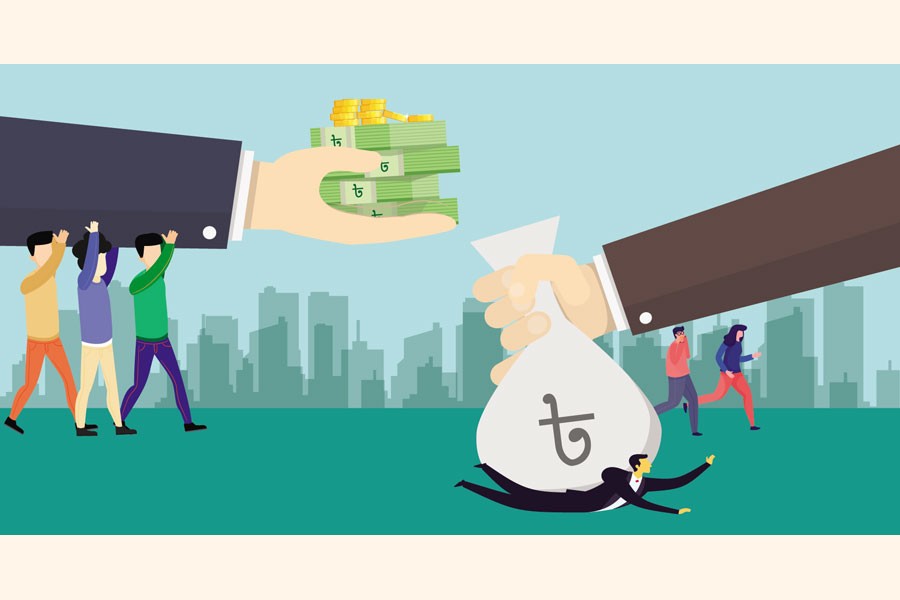 Amongst Bangladesh's many achievements one that stands out quite prominently is the meteoric rise of the private sector, and in particular, the emergence of a brand-new capitalist class. No one has attempted to delve into the fascinating story of how this class came to be. The popular notion is that the 'brief-case' businessmen of the 70s-80s, the opening of the RMG export sector in the 1980s, money made by 'manpower' exporters, and a deliberate policy of cheap loans that did not really have to be paid back were instrumental in primitive accumulation. In addition, working capital requirements descended from thin air through another scam-the well-known method of over-invoicing/under-invoicing. This, of course, 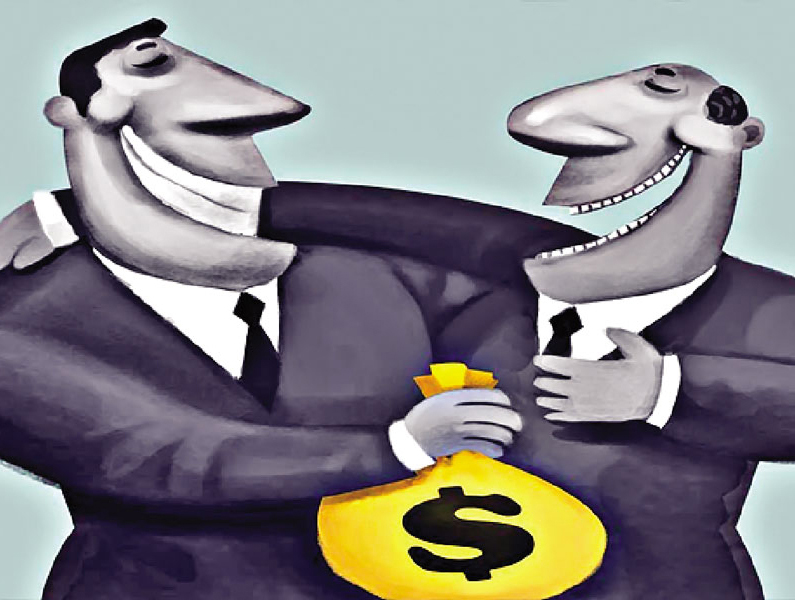 is an oversimplification, although there is more than a grain of truth in the narrative. What we can say with hindsight is that Bangladesh's capitalist class has emerged with well over 100 family-firms identifying themselves as "Groups" that enjoy billion-dollar turnovers (if key business sources are to be believed). How this has come to be is certainly worth exploring but for this particular piece written for the FE, my objective is much more limited. I would simply like to observe that along with expansion, maturity, and evolution of our business class, we now also have a strong crony capital segment alongside it. My impression is that it is the crony segment that is in the ascendant. The question I pose is: does it matter?

What is Crony Capital:

"Crony capitalism is a term describing an economy in which success in business depends on close relationships between business people and government officials. It may be exhibited by favouritism in the distribution of legal permits, government grants, special tax breaks, or other forms of state interventionism," as it is stated in Wikipedia.

Various types of crony benefits have been discussed in the literature, including: 1. Direct money transfers in the form of reduced taxes, subsidies, or 'special treatment'; 2. Entry barriers to preventing competitors coming into the market through tariff or non-tariff barriers; 3. Direct price intervention or control. Here, cronyism is seen as being almost similar to legislation intended to benefit a particular 'special interest' group. In other words, it is just another way to refer to what economists call rent-seeking, and everybody else calls it corruption.

The crony phenomenon is not new and certainly not restricted to developing countries or even advanced countries. Numerous examples can easily be traced by just doing a simple Google search. Economic historians have even blamed crony capital for the decline of European nations in medieval times when the main form of industrial organisation was the Guild-a retrograde form that presided over monopolies, restricted entry, and kept wages and innovation at a low level.

In an effort to better understand the concept of cronyism, one researcher conducted a Google Scholar search but found this unhelpful. He writes, "I have examined the first 100 articles in Google Scholar with "Crony Capitalism" in the title. The literature is not very robust. Google Scholar indicates that there are in total about 26,000 results. The most cited article in the list is cited fewer than 500 times, and most are cited fewer than 50 times. In comparison, there are over 120,000 references to "rent-seeking." The most cited article is cited over 5,000 times, and many are cited over 1,000 times." Clearly the concept is not doing very well.

A range of stakeholders have begun to worry about cronyism across the world, including investors, entrepreneurs, and public officials concerned with adverse effects that this is having upon host economies. In a context where powerful private-sector interests shape the laws and regulations to their own advantage, the outcome can easily be guessed. A few powerful firms are able to influence legal, political, and regulatory bodies to safeguard and indeed expand their access to privileges. In other words, a few companies or sectors/sub-sectors benefit at the expense of everyone else. Thus, it is crucial to be able to understand the extent to which "state capture" is problematic as part of a general assessment of the governance regime.

A closer look would then involve the use of special exemptions given out by the tax system or selective enforcement of rules. Frequently, financing is obtained in the shape of cheap, publicly guaranteed credit while government contracts are awarded on the basis of 'political connections'. The other side of the coin consists of those left out - smaller entities or those without connections whose numbers are much larger. They face the costs and risks that the influential firms are able to avoid. Desai (2105) shows a table that relates various costs to firm influence where the power of influence to reduce costs is brought out starkly. A political economy that rewards influence may well be punishing the most dynamic firms and sectors thus constraining expansion, growth and innovation.

Is There a Crony Sector in Bangladesh: There are cronies everywhere, even in the Land of the Free. This does not mean every big or powerful company is a 'crony'. Henderson (1999), for example, identifies General Motors as a crony but also notes that Ford Motors is not. Similarly, in Bangladesh we could probably point to some large Groups of Companies who are cronies but at the same time point to others who are not. So, it is safe to assume that the crony problem exists, and even it is thriving, but at the same time we should acknowledge there is a large, independent sector that may currently be smarting. The tell-tale signs are everywhere. Policy making today is explicitly about how to encourage the private sector which is certainly a good objective to have, but there is a concern also: what it really means is that policy concessions are essentially driven by the few in the name of the many. The state of the banking sector is a stark reminder of this. One need not go much beyond the high NPLs (non-performing loans) to understand the power of crony capital. Similarly, banking rules and regulations have also been influenced and crafted in a manner that seems to address crony interests. For example, the interest rate policy imposed on the economy goes against all market norms. The reversal to an earlier era of administered interest rates - and that too without much technical discussion-is difficult to comprehend without invoking the crony phenomenon. Certainly, the impact of the new interest rate paradigm on investment has been imperceptible while we are still watching whether the interest collapse imposed on us will in fact lead to a better performing stock market. Even if that were to happen, what implication does that have for promoting a thriving, independent private sector? In the meantime, desolate depositors, including pensioners and widows, can look forward to an era of negative real returns on their money at perhaps the most difficult time of their/our lives as we continue to struggle against Covid-led blues.

One must also point to what can only be considered a policy obsession when it comes to RMG (ready-made garment). The sector has power and influence, and an ability to lobby hard - but it is hard to understand why most policy targets focus singularly on this sector at the expense of all others, including those which may well emerge as powerful sectors given support. At least for RMG, support that is given is sector-wide and so may not be intrinsically crony in character, although the continuous demand for 'support' is not easy to sympathise with.

Every sector in the economy can be divided into crony and non-crony segments. While the crony segment is doing much better in terms of access to credit, an ability to 'enjoy' an even higher rate of NPL (non-performing loans) and enter into lucrative deals with public sector entities, the non-crony sector is tied down and can only compete with difficulty and at high costs. However, history tells us that crony capital eventually becomes soft and lazy, and reaches a point when without continued support it falls flat on its face. Innovation evaporates, appetite for risk taking dwindles and entrepreneurship takes a hard hit. It is actually the non-crony sector that can lead us to the next phase of development whether in agriculture, industry, exports or services - and it is therefore crucial to re-centre and re-balance the playing-field and not punish the good and prop up the bad. This will be difficult, given extensive crony infiltration into policy making processes, but that is exactly what is required. This is the lesson of history if anyone cares to take a look. Let me give an example here from close to home: there is a small 'old capital' segment in Bangladesh that dates back to the pre-1971 era. This old capital was used to licenses and handouts, but being old capital, they felt it was their birthright to keep benefiting from concessions indefinitely. However, after 1971, all equations had to be reset, and we find that old capital while still around (forgive me for not calling names out) has been forgotten and superseded as a new, vibrant capital came and replaced it. Old Capital was unfit to compete with the new even when it came to rent-seeking. We now have a class of new 'old capital'. This class also thinks it will continue to benefit from their networks forever. History tells us a slightly different story.

The vicissitudes of history are not entirely lost upon cronies. It is precisely from such concerns that we have a huge problem of capital flight and money laundering as cronies struggle to stash away the fruits of their concessions in safer locations.

The 'What' Question: Bangladesh has entered a phase in its development trajectory that requires massive public investments. At the same time, the private sector is poised to extend its grasp well beyond RMG in a number of new directions, including light engineering, start-ups, chemicals, automobiles, and the hitherto sluggish leather sector. New opportunities in the energy sector are also beckoning. We see that crony capital is aggressively trying to appropriate these opportunities and it is a cause of concern. First, crony sustainability will require an open-ended commitment from the government for concessions, rebates and bailouts without which they will find it hard to compete globally. Secondly, the flow of raw energy of independent capital derived from the fresh and continued entry of younger, dynamic, and aggressive entrepreneurs will become stalled. While the short-term effects may not be immediately discernable, ambitious, longer-term goals of the government will be seriously compromised and even defeated.

One may well ask how it is that East Asia is doing so well despite a long history of crony capital. This is a good question but one that has to await an answer. Let us, however, note that a number of East Asian countries suffer from the Middle Income Trap (e.g. Thailand, Indonesia, the Philippines) and that a major problem in these countries is the power of unbridled crony capital.

Unfortunately, I see no fundamental departure from business-as-usual anytime soon. One thing that is certain is-one set of crony network will eventually give way to a new set over longer time 'political-economy' cycles. This will only mean that one set of cronies will be replaced by another - hardly an exciting prospect. What we must collectively ponder over is how to encourage a governance regime that will decisively move towards a new political economy and line up solidly behind independent capital.

Post script: While going through the literature, I came across country studies on crony capital and its effects in a number of contexts: India, Egypt, Latin America and so on. Perhaps our researchers might want to explore this area of work - of course, in a calm, objective manner devoid of value judgements.

Dr KAS Murshid is an economist and former Director-General, BIDS.