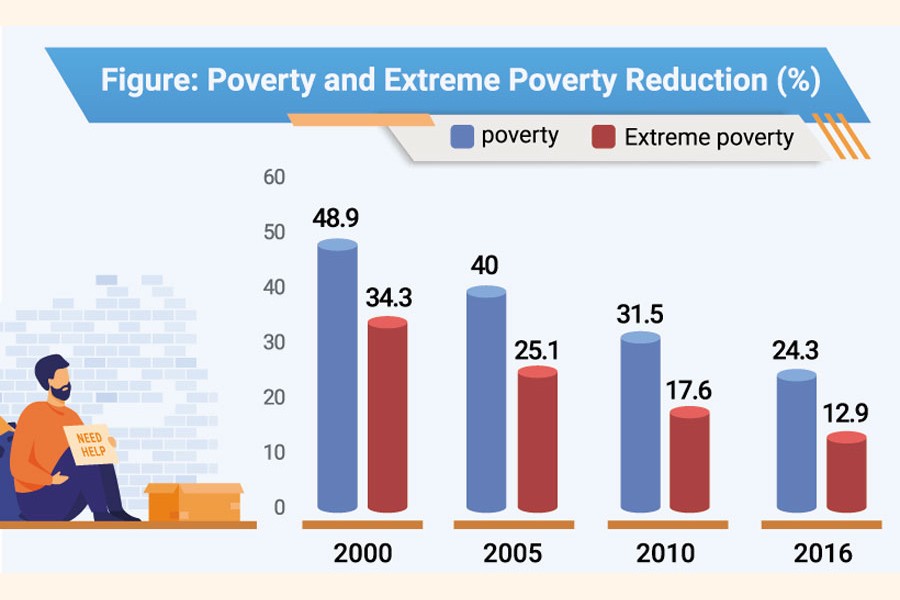 Bangladesh applies Cost of Basic Needs (CBN) method for estimating poverty incidence using the Upper Poverty Line (UPL or poverty) and Lower Poverty Line (LPL or extreme poverty) as the parameters. The former includes the population living in poverty by daily kilo- calorie (kcal) intake less than 2,122 per person per day whereas it is 1,805 kcal for the LPL. This article focuses on identifying factors that contributed to the reduction of poverty in the 21st century and the changes to further reduction in poverty. The critical thoughts in this regard include household and spatial characteristics, rural vs urban and regional differences, and the trends in distribution of income.

Despite such overall improvements in poverty reduction, the Household Income and Expenditure Survey (HIES 2016) has identified that nearly 39 million people lived in poverty and almost half of those (24 million) are living in extreme poverty and suffering from multiple deprivations such as under-nutrition, lack of access to education and basic health services, social discrimination, physical insecurity and vulnerability. The glimpse of both poverty-and extreme-poverty-reduction scenario is present in the figure below.

The uneven reduction in poverty across the household and spatial characteristics, rural vs urban, and regions requires a great attention of the policymakers. For example, the pace and pattern of poverty-and extreme-poverty reduction differs between rural and urban perspectives. The rate of poverty and extreme poverty had declined relatively slowly during 2010-2016 compared to 2000 - 2010. Similar findings are also evident for rural picture. Most importantly, urban extreme poverty remains almost stagnant for the recent past few years.

There is also a clear divide in poverty reduction between Eastern (Chittagong, Dhaka, Mymensingh and Sylhet divisions) and Western regions (Barisal, Khulna, Rajshahi and Rangpur divisions) of Bangladesh. Historically, the West is worse than the East in terms of economic gains and, thus, the highest incidence of poverty in the West is evident. This is true irrespective of poverty lines. Gap in poverty and extreme poverty between east and west still persists at a high level, implying regional disparity in terms of poverty position. Extreme poverty is almost twice in the West (19.1 per cent) compared to the East (10.4 per cent). During the period of 2005 to 2010, the West experienced higher poverty reduction compared to the East and contributed to reducing the gap in East-West divide. However, it has reversed during the period of 2010 to 2016 and, thus, accentuated the East-West divide once again.

Savings as one of the factors of structural change might have contribution as it is evident from macro data that the savings rate had gone up to 30 per cent of GDP during the time period of 2010 to 2016 from 27 per cent during 2000 to 2010. Moreover, saving is also associated with consumption. Therefore, growth paths of income and consumption might diverge due to the change in behaviours of savings. As savings have gone up in the recent past few years, acceleration of GDP growth may not be reflected in the consumption growth at the same pace.

As poverty is measured in terms of Cost of Basic Needs (CBN) approach, growth in GDP may not reflect poverty reduction as we expect. However, growth in savings is not sharp enough to explain the pace of slowdown in recent poverty reduction in Bangladesh. It is noteworthy to mention here that increase in savings might have future implications in reducing poverty as savings may also have long-term positive effect for growth and consumption. This gives rise to exploring what other factors might contribute to slowdown in poverty reduction.

Rising inequality may contribute to slowdown in poverty reduction.

Despite acceleration of GDP growth in Bangladesh, poverty reduction slowed down (during 2010-2016) because of the more unequal distribution of income between the two extremes of the income divide.

Now we look at distinction of the share of households in agriculture between East and West. It reveals that larger share of households in the West pursue agricultural livelihoods compared to the East. The gap still persists at a high level. Moreover, dependency on agricultural livelihoods declines by 1.8 percentage points per year during 2010-2016 whereas it declined by 3 percentage points each year during the same time period. So happened as the incidence of poverty is much higher in agriculture compared to industry and services. This has the implication of higher incidence of poverty in the West compared to the East.

Moreover, lower employment opportunities in the rural labour markets after 2010 also contributed to real-wage decline for wage labourers and self-employed workers in the rural labour markets in Bangladesh. In addition, slowdown in the rate of agricultural growth was observed after 2010. All this contributes to slowdown in the pace of poverty reduction in the recent years.