How to heal Achilles' heel 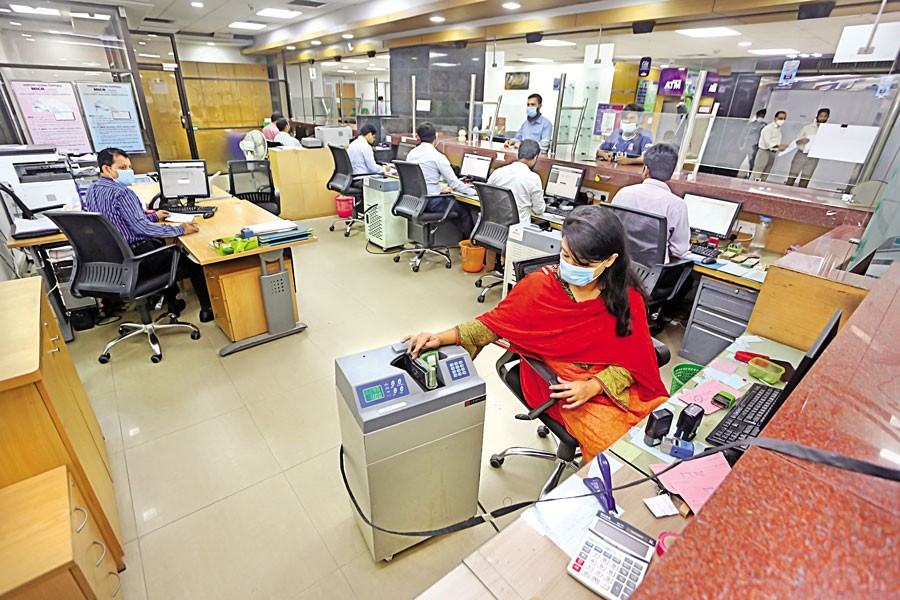 An inside view of a bank branch in Dhaka — FE Photo

The focus of this writeup is banks, which historically have contributed positively to our development. In recent times, several problems and challenges have appeared in the banking domain, which include, among other things, mismanagement, corruption, lack of transparency and accountability and, above all, lack of good governance. The challenges are manifold, including regulatory governance.

The main reason for global recession (2008 onwards) can be traced back to the mismanagement of banks and financial institutions. Despite all the measures taken by different countries, with the US taking the lead, full recovery has not yet been forthcoming. The situation around the globe is a challenging one due to the onset of Covid-19 pandemic. Small economies like Bangladesh are by no means invulnerable to fallouts from global downturns or negative spillover of the unprecedented pandemic. Bangladesh need to argue forcefully for the same priority in stability as recovery, as well as for stability action agenda going beyond addressing symptoms (i.e. lapses in risk management, default loan, money laundering) to addressing underlying causes (i.e. lax policies, non-compliance of prudential and management norms, poor financial reporting, lack of good corporate governance).

So what are the implications of the Bangladesh economy minimizing external shocks and internal shocks? This article will mainly address the several challenges facing the banking sector in creating internal shocks in the economy. The Hallmark and Bismillah Group financial scams and then the financial irregularities in BASIC Bank, one of the state-owned commercial banks, have demonstrated cracks in the governance and management of these banks. From the Board of Directors to the management group to the lower-level officials, these banks have not shown any sign of good governance, transparency and accountability. A disturbing fact is that these irregularities have permeated private commercial banks as well.

There are several state-owned and private banks that have slightly different governing structures but follow the operational guidelines of Bangladesh Bank in terms of prudential and management norms. The norms provided by the central bank are fairly well-formulated and follow international standards. The International Accounting Services Board (IASB) under the Bank for International Settlements (BIS) in Basel, Switzerland, has provided three major norms namely Basel I, Basel II and Basel III. Basel I of 1988 required that banks and financial institutions have sufficient capital adequacy, which was originally 8% of risk-weighted assets (RWA). Later on, it was raised to 10% for banks, including those in Bangladesh. There are some banks in the country whose requisite capital adequacy falls short of the norm. Basel I set up a mechanical, non-market-oriented measurement of capital adequacy which could not take care of fundamental risks, e.g. operational risk and market risk. Basel II, introduced in 2004, took care of the different types of risks for financial intermediaries (i.e. banks) as well as the supervisory review process for the management of banks.

The global community realized the inadequacies of Basel I and Basel II during the global financial crisis of 2007. Basel III was designed in 2013 to strengthen the capital framework of banks and to give more emphasis on equity capital (Tier-1, core capital); second, to ensure global liquidity; third, to highlight systematic risks as well as mitigation measures that address the risks. Two major aspects regarding liquidity are Liquidity Coverage Ratio (LCR) and Net Stable Funding Ratio (NSFR). Bangladesh bank has recently issued a circular to implement Basel-III liquidity ratios.

Besides the three international Basel norms discussed above, banks follow other guidelines prescribed in the various Acts and Regulations in their respective countries.

In Bangladesh, requirements for the financial reports of banks, non-bank financial institutions (regulated under the Financial Institution Act) and various companies are quite reasonable. The disturbing part is that these requirements are not properly complied with by various institutions. This means that the implementation (enforcement and compliance) of rules and regulations is an 'Achilles' heel'. Despite supervision and monitoring by the regulatory bodies such as Bangladesh Bank and BSEC, serious mismanagement and malpractices have occurred in the banking sector as well as on the capital market. The disclosure of banks in their financial reports is prepared following the International Accounting Standards-30 (IAS-30). This has been replaced by International Financial Reporting Standards (IFRS-7).

According to this format the financial disclosure is more logical, which means that banks now face higher risk in investment and management of capital. If the required standard is followed, then depositors and clients of the banks and the general people will not face any loss. Besides IAS-30, there are also IAS-32, IAS-39 and IFRS-9, which are prescribed for the management, supervision, and monitoring of financial intermediaries. The government of Bangladesh promulgated the Financial Reporting Act (FRA Act) in September 2015. Under the aegis of the FRA Act , the Financial Reporting Council (FRC) started functioning in the middle of the year 2017. The FRC is empowered to cancel the registration of auditors and give punishments for fabricating audit reports. We expect that FRC will be proactive to bring discipline in the banking sector.

It is pertinent to mention that a balance must be made between the regulation and independence of a bank. This means that banks should neither be overregulated nor should they be left alone to enjoy complete freedom, which often results in banking disasters. It is important to keep in mind what financial regulation is meant to achieve. The most important objective is to protect depositors, investors, the general public and the real economy (real goods and services) as a whole. The second rationale for regulation is to minimize the domino effect of the systematic risks of the financial institutions which destroy the foundation of economic activities, resulting in loss of real output, lower growth, higher unemployment and reduction in human welfare. Good governance in the banking sector must be emphasized in our country, especially in the present context of the crisis in the banking sector. Transparency and accountability have recently become an issue of greater concern with revitalized importance in the context of public and private responsibility of managing banks.

Those who are responsible have not yet been subjected to administrative and legal actions. In fact they got "perverse incentives" and the honest and dedicated people working in the same bank and elsewhere are pushed back into inefficiency, as Gresham's law in economics states that "bad money drives out good". The lack of accountability of bank directors and bank-management personnel for any wrongdoing has resulted in repeated scams and corruption in the banking system.

The transparency of financials of banks is secured through full disclosure and by providing fair presentation of useful information necessary for making economic decisions to a wide range of users. In the context of public disclosures, financial statements should be easy for users to interpret.

With a view to strengthening good governance in the financial sector, especially in the banking sector, Bangladesh Bank embarked on several financial-sector reforms over the years. A large number of homegrown reforms have already been taken and some are underway. Bangladesh Bank attempted to strengthen the legal framework of the financial sector, bring in dynamism, extend autonomy to the central bank, combat money- laundering offences, and stop terrorism financing.

There are several other prudential norms of Bangladesh Bank and others related to the Basel Guidelines and the guidelines of various Acts of Bangladesh. Another important aspect is the management norms, which concern the fit and proper test for CEOs and directors of a bank, restrictions on the composition and functions of the Board of Directors. Banks have been directed by Bangladesh Bank to include one independent director in the Board of Directors. Audit Committees for all banks were mandated with clear guidelines, and TORs and an early warning system (EWS) was introduced. The Core Risk Management Guidelines on major risks were introduced quite some time back and credit-risk assessment by External Credit Assessment Institutions (ECAI) had been recommended for all commercial banks.

However, in recent times, we have seen that many of these prudential and management norms are not followed by banks. There are several privately owned banks where a number of family members are on the Board of Directors, which is contrary to the notion of good corporate governance. Therefore, one of the main challenges for the banking sector is to ensure good corporate governance which will benefit the depositors, borrowers and investors, expand potential markets, broaden ownership, create alternative financing options, accelerate growth, increase employment and help reduce poverty in Bangladesh.

The recent situation in some banks and financial institutions reveals a very disturbing picture. The financial reports in some cases, mainly the audited ones, have been manipulated and facts concealed. The auditors as independent examiners have failed and worked with corrupt management. Some of the audit firms have been blacklisted by the Bangladesh Bank. The Financial Reporting Council (FRC) has also identified faulty audit reports. Strong actions have to be taken by the concerned regulatory bodies, namely, the Bangladesh Bank, the Financial Reporting Council and the Bangladesh Securities and Exchange Commission (BSEC). The Institute of Chartered Accountants of Bangladesh (ICAB) and the Institute of Cost and Management Accountants of Bangladesh (ICMAB) both have the responsibility of ensuring good and honest practices by the professional accountants, who are integral parts of good corporate governance.

To balance the objectives of good governance and ensure compliance with regulations, three major steps are necessary: (a) a strong and independent central bank with more focus on core banking issues (b) a well-thought-out set of prudential and management norms of the central bank that are not subject to frequent changes due to external political/administrative pressure as well as ensuring full compliance of norms by the banks and financial institutions and (c) a system of prompt corrective actions for management of crises and for legal/administrative action against persons responsible for crises in a particular bank or in the banking 'system' as a whole.

If we fail, crisis in the banking sector will spread like a contagious disease to the real sector of the economy which will pose serious threats to and path for sustainable economic development. The Covid-19 pandemic which has spread all over the globe, has created fluid situations of economic vulnerability and uncertainty hitherto not seen. Ensuring good governance and management in financial institutions is of utmost importance to take our country forward.