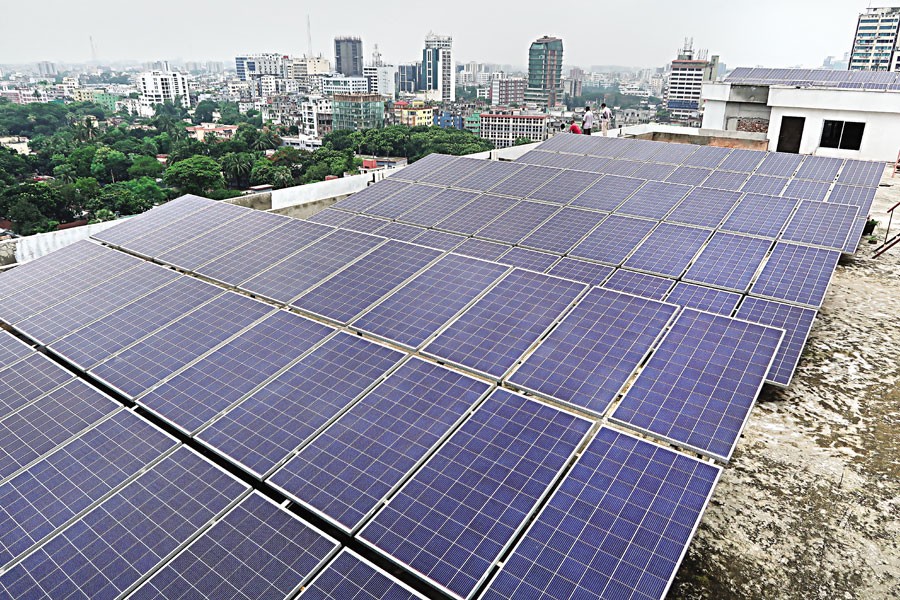 Bangladesh is one of the most densely populated countries in the world, as a result of which land is in short supply here for purposes other than agriculture and housing. This may have been one of the reasons why the target of generating 10 per cent of total power generation in the country from renewable sources like solar energy could not be realized by 2020. Adopted in 2008, the renewable energy policy of the government stipulates that no land that is productive for food crops is to be used for purposes other than agriculture. The provision, however, rigorously restricts developers from acquiring land for installing solar plants, as such projects usually require four acres of land for producing a megawatt of electricity. This should be reviewed now in view of the advances made in recent times in solar panel technology and its expanded applications in countries like the USA, China and Japan. It has become all the more relevant now because of the adverse effects of global warming and climate change across the globe.

In recent times, many local experts have emphasized on the urgent need for revisiting the provision of total ban on the use of agricultural land for solar projects. This is because the country's energy security will be severely compromised soon if Bangladesh is compelled to meet all or most of its primary energy needs through imports in the backdrop of dwindling natural gas reserves and untapped coal stocks. A revised policy may provide for complete preservation of all 3-crop agricultural lands, while allowing solar projects in up to 25 per cent of 1-crop or 2-crop lands. Besides, solar energy developers may jointly explore with farmers the potentials of growing crops under solar panels as well as installation of floating photovoltaic systems on water-bodies, which are fast becoming popular in countries like the USA and China.

As pointed out by the professors Ijaz Hossain and Ishtiaq A Chisti (2020, SREDA) of Bangladesh University of Engineering and Technology (BUET), about 20 per cent of the total area in the country remain submerged for a better part of the year. About 95 per cent of this low-lying land is either abandoned or explored for fishing by the locals, thereby rendering the land useless or yielding little for the owners. These lands are usually cultivated for one crop during the few months they are dry, thereby barely increasing the lands' utility. Using such land for the combined purpose of solar power, crop production and fishing is an innovative solution that is already being practiced by some countries. As reported by Bloomberg (2019), fish farms currently host almost 9.0 per cent of solar power plants across China.

This dual usage would require a slightly larger area than conventional solar plants because of the need for spaces between rows of panels for fish farming. The construction costs of such a solar-cum-fisheries plant may be slightly higher, but that would be more than offset by higher income through fisheries. Besides, the solar modules placed over the water-bodies have a cooling effect that increases the panels' efficiency. The fisheries component of the plant will generate employment for the local community, which would be helpful for the families that sell or provide land to the project. Fish production from the same acreage can increase ten-fold when industrial-scale fishing is undertaken in the solar fisheries project. Therefore, optimal dual usage of land that benefit the local agricultural community can be an excellent means of promoting solar power projects in Bangladesh in the backdrop of chronic land scarcity in the country.

Two recent articles published in the US-based The Christian Science Monitor (4 October) and Science (14 October) have also highlighted the advances made in application of solar panels in agriculture. Titled 'Solar energy is a new cash crop for farmers - when the price is right', the first article by Xander Peters shows how the transition toward renewable energy is creating a new kind of demand for rural land, and small farmers are hoping it can be a win-win trend - benefitting the environment as well as their own security. Titled 'Growing crops under solar panels? Now there's a bright idea', the second article by Matt Simon points out that researchers are showing in the new scientific cum literal field of agrivoltaics how solar panels can increase yields and reduce water-use on a warming planet.

An increasing number of US farmers are now producing solar energy alongside crop cultivation - an idea with big promise at a time of rising focus on climate change and the need to move away from fossil fuels. It is being spurred on by local policies and rising interest from energy companies that need land. US states like Massachusetts, Michigan, Colorado, California, Maine, Illinois, and Virginia have even amended zoning laws for cropland solar projects alongside offering tax rebates in some cases. According to an expert of the US National Renewable Energy Laboratory, "Farmland serves as almost a perfect location for solar developers wanting to develop these utility-scale, ground-mounted solar projects". If farms are flat, have access roads, and have access to power transmission lines - they are an ideal setting.

An example of a solar installation would be solar panels mounted to the ground with only gravel or grass in-between. But other landowners are also opting for agrivoltaics that encompass agricultural innovations including built-in-pollinator habitats, sheep grazing, and planting crops below the solar panels. A recent study found that if the US farmers could share just 1 per cent of their farmland for clean power - about 13 thousand square miles - as much as 20 per cent of the country's electricity could be generated renewably. For many farmers, the benefits of such solar projects are substantial, alongside the lucrative possibility of clean power, cropland and jobs coexisting together in a holistic manner.

In his article, Matt Simon has highlighted the achievements of a Colorado farmer who covered over 15 per cent of his 24 acres cropland with solar panels. A huge array of crops including carrots, kale, tomatoes, garlic, beets, radishes, lettuce and others are grown underneath those panels that have also been generating enough electricity to power 300 homes. In fact, human beings will need to get creative about where they place their solar panels if they are to stave off the worst effects of climate change. The options include covering canals with panels, thereby reducing evaporation while generating power; filling up the open spaces of airports with sun-eaters; and sticking a solar array in a field while planting crops underneath. The latter is a new scientific innovation known as agrivoltaics - agriculture plus photovoltaics.

As is well-known, plants need sunlight, but some need comparatively less than others and may get stressed by too much light. If these crops are shaded by panels, they will need less water in contrast to swift evaporations in open fields. Besides, plants also 'sweat' that cools the solar panels above and enhances their efficiency. Therefore, the outcome is a rare win-win-win situation where the intense sunlight that bakes off the water and stresses out the plant is reduced by growing crops under the shade of solar panels. Research has found that the panels significantly reduce air temperatures that also benefit farm workers grooming the plants. Besides, the panels might act as a protective bubble for shielding crops from extreme heat associated with climatic variations that usually overwhelm crops and decrease their yields. Protecting plants in this manner when there is extreme heat or extreme precipitation due to the impact of climate change can actually benefit them.

As pointed out by the BUET professors, the policy makers in Bangladesh should come out of the conventional mind-set that solar energy is expensive and Bangladesh does not have enough land. As has been shown by research, merely 1.0 per cent of the country's agricultural land can be utilised to meet about 18 per cent of the nation's energy needs. And cost-benefit analysis has already shown very clearly that producing solar power in agricultural lands will be profitable for Bangladesh, which can also be utilised for enhancing crop yields as well as fisheries output.