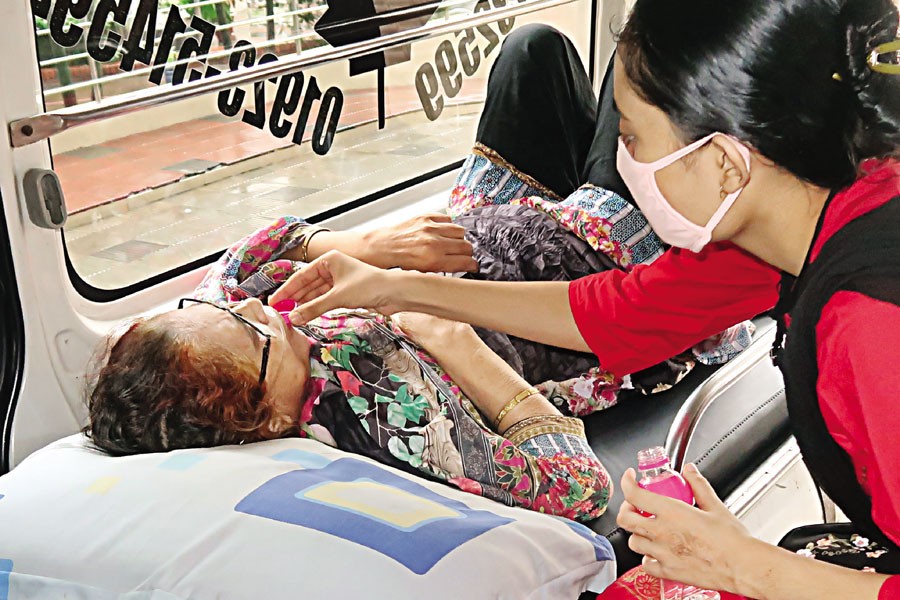 The Health system in many low- and middle-income countries where public and private sectors coexist is known as mixed health system. This phenomenon is termed in the academic world as 'mixed health systems syndrome,' and this syndrome demonstrates symptoms such as a high out-of-pocket (OOP) expenditure and crowding out of publicly financed services by the privately financed market delivery.

In Bangladesh, public health service is provided under the aegis of the Ministry of Health and Family Welfare (except for the primary health in urban areas, which is covered by the Ministry of Local Government, Rural Development, and Cooperatives), while private-sector health service is provided by small or large privately owned institutions, or by the non-governmental organizations (NGOs). Directorate General of Health Services (DGHS) provides and renews licenses to the private healthcare institutions under Ordinance number 4 of the Medical Practice and Private Clinics and Laboratories (Regulation) of 1982.

The span and magnitude of private-sector healthcare are vital in Bangladesh as it caters to the major portion of healthcare needs. Prominent health-system research Ann Cockcroft showed in a research article that 87 per cent of all healthcare provisions are made through the private sector (informal 60 per cent, formal and NGO 27 per cent) in Bangladesh. The informal private sector has been pervasive in Bangladesh for a long time. However, after the adoption of free-market economy in the 1980s, the expansion of the formal private sector also followed suit. The World Health Organization data show that, in the year 2000, 63 per cent of the total health expenditure was incurred by the private sector; and in 2016, this increased to 74 per cent.

Another symptom of a mixed health system is the increase in OOP health expenditure. In 2000, OOP expenditure was 61 per cent, which increased to 72 per cent in 2016 and is arguable 74 per cent at present, which is one of the highest in the world. During the same period, the proportion of health expenditure from the local sources decreased from 29 per cent to 18 per cent. Bangladesh Health Accounts (1997-2015) data show that, in 1997, public- sector healthcare accounted for 0.83 per cent of the gross domestic product (GDP) of the country, which went down to 0.68 in 2015. Conversely, private-sector contribution rose from 1.44 per cent to 2.31 per cent during the same time.

In addition, Health Bulletin (2019), published from DGHS shows that 63 per cent of the total hospital beds in Bangladesh belong to the private- sector hospitals and clinics. This is only the number of beds that are formally registered or licensed with the DGHS; needless to say, there are many more unregistered beds in the private sector.

Clearly, the private sector is going strong against the public sector in the country's health system. The question is whether we should consider this phenomenon as a problem or an opportunity. The answer depends on several factors.

First, it depends on whose perspective we are taking. From the perspective of the for-profit commercial hospital owners, this, of course, is an opportunity. Countries like India, Thailand, Singapore, Turkey etc have established medical tourism as one of the major sources of their revenue. But, from the perspective of the poor healthcare-seekers of Bangladesh, this is completely opposite to that of the rich private- sector healthcare providers. Other important issues in this regard are the type of care provided by the private sector, quality of care, whether the service is equitable, etc.

In regard to the quality of care, the results are mixed. In some studies, the private sector has been found to provide slightly better quality health services. In a study by this author, comparing the responsiveness of physicians in public and private sectors, it was found that none of the sectors provides a satisfactory level of responsive care. Particularly, in terms of the domains of 'gaining trust' and 'financial sensitivity,' public- sector physicians outperformed their private counterparts.

Another study by Gruen et al (2002) found 80 per cent of Bangladeshi doctors engaged in dual practice (i.e., working in both the public and private sectors), which renders them untrustworthy in the eye of the service-seekers.

Currently, one of the major criticisms facing the private health sector is a high rate of cesarean section in Bangladesh. Although this procedure is supposed to be an emergency procedure, this is being practiced indiscriminately despite its harmful consequences. While 83 per cent of the deliveries in the private sector are done by cesarean section, this is only 35 per cent in the public sector, and in NGOs, 39 per cent. This trend may be explained by the expenses of conducting the procedure: the average cost of normal delivery is Tk 2479 while that of cesarean section is Tk 21185.

Against this backdrop, the policymakers in Bangladesh should take immediate measures to regulate the private sector. The methods of regulating the private sector can be divided broadly into three categories: Command and control, Incentives, and Self-regulation.

The most common approach in Bangladesh is the first one, i.e., Command and control, which, like many other countries, has turned out not to be very effective. In Bangladesh, the command-and- control approach is not only difficult to implement but also the essential criteria of the licensing are argued to be faulty. License is given only based on the documents submitted by the applicant, without accounting for the input, process, or output indicators. Therefore, if the quality of care of the private institutions is not up to the mark, there is hardly anything to do against them. The regulating authority does not have any say on the quality standards, do's and don'ts, the highest number of patients a physician can attend per day, limit of the consultation fee, the charge of different services, etc.

Although command and control is the only regulatory mechanism in Bangladesh, other countries often employ mechanisms such as engaging and empowering the patient groups, consumer associations etc. Even the service providers' associations contribute to Self-regulation. However, this may not be feasible in the Bangladeshi context, as professional associations like the Bangladesh Medical Association (BMA) often act like trade unions, concerned only about their professional members rather than the general public.

In the context of Bangladesh, a combination of Incentive and Self-regulation can be tried as regulatory mechanisms, in addition to the existing command-and-control method. Incentives can be given in the form of capital, credit, tax holiday, subsidies, prizes, training, institutional alliance etc., in return for improving quality of care, expanding services to underserved areas, or providing a service that is inadequate in supply. Encouraging or empowering the consumer association, developing accreditation councils etc may also help. These bodies may evaluate the quality of services of the private-sector providers, classify them according to the services, and facilitate informed service-seeking by the consumers.

It is important to keep in mind that, just like many other countries, the development and expansion of the private sector happened in response to people's demand, and the private sector is not going anywhere, anytime soon. We need to make decisions about them accepting this reality. The famous medical journal, Lancet, in its series 'UHC: markets, profit, and the public good' maintains that the best way for the government is to find such incentives for the private sector that encourage them to change their behavior, improve quality of care, and place health equity above commercial gains.

Instead of carrying out makeshift inspections in private clinics and hospitals, it is imperative to strengthen the overall health system, fundamentally upgrade the regulatory framework and mechanisms, develop a mediatory mechanism and dedicated legal framework against medical malpractices, make strong policies in these regards, take clear and specific strategic planning, and, finally, implement them in a comprehensive and integrated manner.

Above all, it is also essential to improve the quality of care in the public sector so that the poor people do not feel compelled to seek care from the private health sector in the first place.

Dr Taufique Joarder is the Vice-Chairperson of Public Health Foundation, Bangladesh. He can be reached at