The unfolding successes and roadmap of MFS in Bangladesh 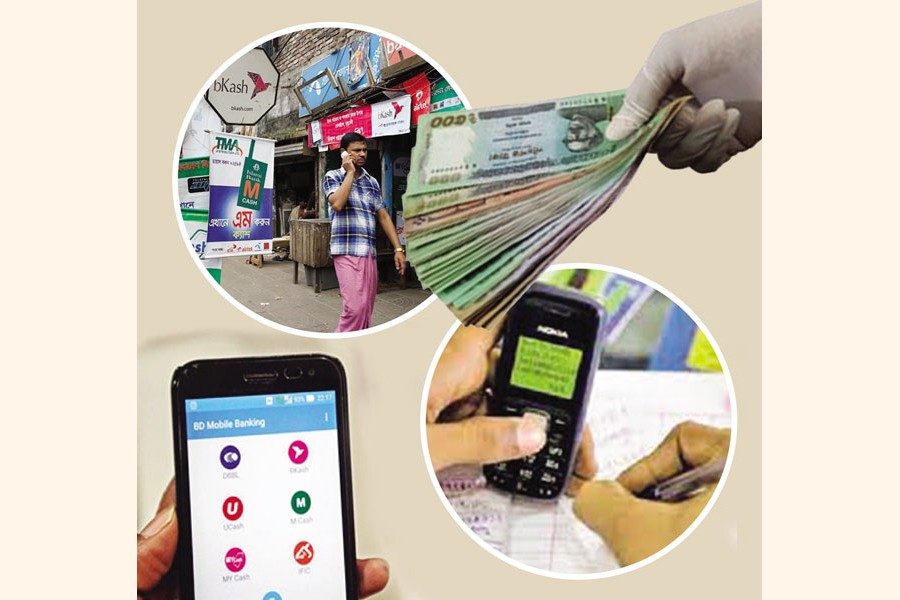 A decade ago, a Bangladeshi garment worker used to receive salary exclusively in cash, then go through a lot of trouble to carry the relatively large amount home and was compelled to rely on unsafe means to send money to dear ones. Now, a worker can receive salary in her/his own mobile wallet and send money back home within seconds. Not only readymade garment (RMG) workers but millions of people also now avail the innovative solution of sending money by mobile financial services (MFS). Starting with Send Money, a wide range of other services have also been introduced over a decade. There are endless opportunities to bring more innovative services to make every aspect of life easier.

Back in 2010, less than 20 per cent of the adult population had access to formal banking channels while 70 per cent could access mobile phones. Leveraging that mobile connectivity, MFS providers like bKash have made formal financial services accessible to the majority.

In last eight years, MFS transactions have seen an exponential growth of 1200 per cent. In the month of July 2013, the total transaction value of the Mobile Financial Service industry was Tk 5,200 crore monthly, which eight years later in July 2021 exceeded Tk 66,000 crore. In terms of daily volume, the same was Tk 174 crore in 2013, which is currently 2,100 crore. In terms of customer number, the total industry is now 10.2 crore, which was only 72 lakh in 2013. These figures portray positive changes in MFS sector in the fastest-growing sphere of economy based on information communications technology.

Especially during the pandemic, MFS became an alternative lifeline. It helped to keep the wheel of the country's economy running as well. Data also show that MFS providers like bKash have contributed greatly to the development of this sector through creating state-of-the-art services and innovative solutions following the guidelines of Bangladesh Bank (BB).

During the pandemic, MFS offered services beyond just Send Money or Cash Out. As a result, customers started exploring other use cases of MFS such as purchasing groceries and other daily necessities online, paying internet, TV, telephone, credit card, water, gas and electricity bills, transferring money from bank account into mobile wallet and vice versa, payment of ticket, insurance, government fees and a wide range of other services. Besides providing transaction services, MFS is also used by the Government of Bangladesh to provide direct cash support to 5 million Covid-affected families through four major MFS operators.

In addition, salaries and allowances of the RMG workers have been disbursed through MFS during the pandemic. Not only the new accounts of the workers, each of bKash users' accounts (wallet) is verified by KYC/eKYC where these accounts go through a validation process of verifying the National Identification (NID) with the database of The Election Commission. As per regulations, one NID is entitled to one wallet.

bKash, as one of the pioneers in this industry, leads the way with a robust distribution channel, extensive bank network, state-of-the-art technology and a broad range of services. The total number of bKash agent points is close to 300,000 right now. One can also consider these agents as human ATMs, who provide basic financial services e.g. deposit/withdrawals of funds and opening customer accounts are provided.

Cash-out is the dominant product in the MFS space here in Bangladesh, where approximately Tk 17,300 crore was transacted only in the month of July 2021. Although Cash Out can be done via two channels - through ATM or agent point-close to 99 per cent of the Cash Out is done through the agent points.

Send Money, or Person to Person (P2P) as it is often known, is also a popular service with transaction worth Tk 20,000 crore being done in July 2021 alone. The popularity of Send Money is an indicator of the proliferation of MFS amongst customers.

Salary disbursement is increasingly becoming popular as Tk 3,400 crore was disbursed in July. More than one-third of the RMG- sector wage earners are now being paid through MFS. Salary payment through MFS not only reduces the massive cash-handling cost, and any potential inefficiencies, but also boosts productivity for the apparel industry. Other industries are also using MFS salary payout. In the last national budget, the government included salary payment using MFS as a taxable channel which was previously limited to only account- payee cheque and bank transfers.

As per BB data, almost Tk 3,000 crore of merchant payments and other collection were done in July 2021 through MFS channel. Although this number has grown from almost zero, there remains a massive potential for this sector to grow further. Presence of QR codes at merchant point has grown significantly and the awareness of merchant payments through MFS has grown manifold. With the growth in e-commerce, online payment is an area that holds tremendous potential.

With a huge customer base, it's quite natural that MFS accounts will be used to drive online payments. In order to gain more customer confidence for making payments online, there can be a technological infrastructure where all the parties i.e. buyers, sellers, logistical partners and any other intermediaries are connected in such a way as ensures that the flow of funds only happens after the customer has satisfactorily received the goods s/he ordered.

In 2020, Bangladesh Bank gave approval for "ultra-small" businesses to open an MFS account. This approval gave merchants who don't have a trade license to operate an MFS account. This can be proven to be a game-changing regulatory move where payments can now be made to the smallest of merchants at the grassroots levels. As a result, vegetable-cart vendors or small grocery-shop owners can now accept payments through bKash or any other MFS providers.

Utility Bill Payment is another increasingly widely used service that is gaining traction amongst MFS customers. Almost all the public- utility providers' bills can now be paid using bKash or other providers.

This has brought about a significant convenience to the customers as opposed to the alternative way of queuing up at a bank branch. In July 2021, the total utility-bill payments through the MFS channel were worth nearly Tk 1,000 crore, majority of which was done through bKash.

International remittance, which is the second-largest source of foreign currency for Bangladesh, has also come within the scope of the MFS industry. This is a relatively new product, and within a short period almost 2.0 per cent of the total remittances of the country are now being channeled through MFS. This medium of remittance is designed to be convenient and more importantly is almost done in real time.

Since MFS is designed to cater to small ticket transactions, this will come out as a life-saving service to the expatriate wage earners, particularly in the low-income bracket who need to send money back home in small amounts but at a higher frequency. With the omnipresence of MFS agents across the country, encashment of remittance is just a matter of few steps for the relatives receiving the money.

In the past, the only source of funding the wallet was visiting an agent point. But now with MFS, anyone can bring money to MFS wallets directly from bank or card. For instance, a bKash customer has the option to Add Money from 29 banks as well as VISA or Mastercard cards. This convenience has been created for customers with bank account to let them continue transactions without ever visiting an agent point or bank branch.

The pivotal role of the regulator - Bangladesh Bank - in the success of the MFS industry must be recognized. This important stakeholder has made all the effort to engage with operators while making policy-level decisions. The central bank has been a keen supporter of this industry since inception and formulated timely and necessary guidelines which best supported the growth of MFS.

The MFS industry has had a spectacular growth in Bangladesh, and benefited millions of customers every day. However, the best is yet to come.

In the coming years, we can expect to see customers moving away from doing Cash Out and using services like bill payment, merchant payment, school-fee payment, purchasing tickets etc more frequently.

This change in financial- transaction behaviour will be a tipping point for Bangladesh to embrace a truly digital payment era. In future, people will hopefully do all their financial transactions digitally through MFS and go cashless. To facilitate such digitization though, certain prerequisites do need to be ensured - regulatory compliance, digital literacy and overall awareness among customers. That future of a cashless digital delta may not be so distant at all.

Moinuddin Rahgir is the Chief Financial Officer of bKash. He can be reached at