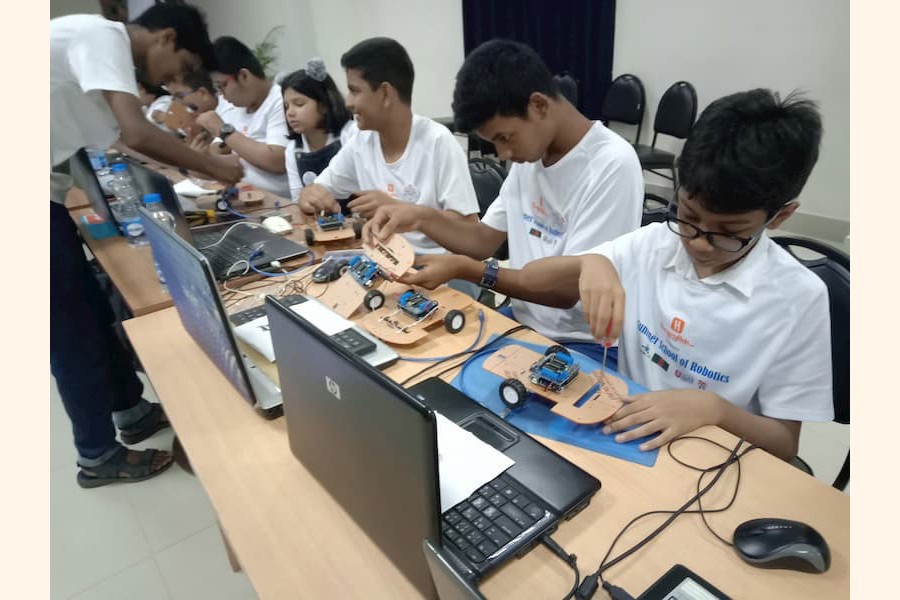 The looming threat of job loss and skill obsolescence has been dominating the discussion of the fourth industrial revolution. There has been an apprehension that Bangladesh and many other less developed countries will be losing factory jobs; notably, factory workers engaged in repetitive manual jobs are believed to be highly vulnerable to job loss due to the unfolding automation. Studies indicate that such loss has already been taking place. For example, Bangladesh needed 153 workers in 2016, instead of 544 required in 1990, to generate one-million-dollar export revenue in the ready-made garments sector. On the other hand, female workers' density has been declining in the sector. It's widely believed that technology progression has been the underlying reason for decreasing labour requirements in production. How to cope up with this trend has been an issue. Furthermore, we should find a way to leverage technology progression to increase value addition from each work unit and other inputs. Increasing our value addition capability is vital for sustaining the growth and creating jobs for a growing number of graduates having high-income aspirations. But to address it, we need to align our industry and education strategy with the unfolding industrial revolution, as technology has been redefining the role of inputs.

INDUSTRIAL REVOLUTIONS TRANSFORMING HUMAN ROLES: It does not necessarily mean that industrial revolutions have been continuously reducing the role of the humans in our means of economic value creation. Instead, it has been transforming. For example, during the first industrial revolution, steam engines took over the energy-giving role from the humans. But it created a demand for human roles in the production. On the other hand, job division, production line and automation reduced the need for knowledge and skill--gained from education, training, and experience. Such advancement has been the driver for making rural boys and girls of many less developed countries like Bangladesh, having now education, training and experience, eligible for factory jobs during the 2nd and 3rd industrial revolutions. Due to continued progression, the remaining roles of humans in production will likely be taken over by machines. Instead of getting paranoid with job loss fear, we should focus on the nature of transformation and adapt our responses. 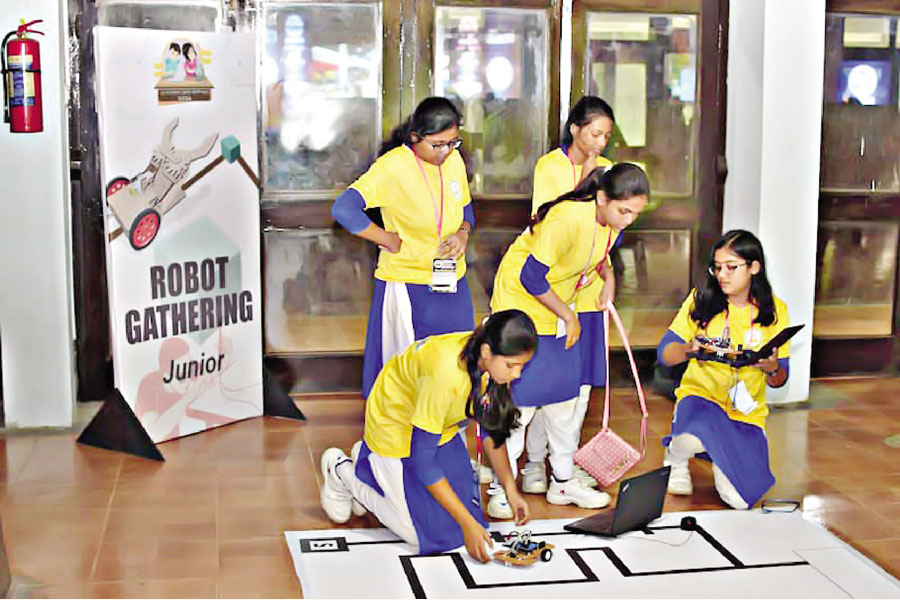 Girls are checking on a mini robot they have developed — www.werobotics.org photo

IDEAS ARE TAKING GREATER ROLE IN ECONOMIC VALUE CREATION: In addition to replicating existing products, human beings play a vital role in scientific discoveries, inventions, innovations, and engineering of customised technology solutions. For producing economic output, we should focus not only on keeping making copies of the same product as per given design-often, imported or imitated. We should also focus on inventing technologies, innovating new products, redesigning existing ones, and improving production processes. It happens that subsequent industrial revolutions have been changing the importance of such human roles in producing economic outputs. For example, in the pre-industrial age, most of the people were busy making the same things in the same way. Even prior to 1900, human roles in American industry were mostly for replication or manufacturing of identical products, as per the designs imported from Europe. But the realisation that pursuing ideas for inventing and innovating could also expand economic value creation that led to the establishment of R&D labs and the creation of jobs for highly educated youths to expand American industry and drive prosperity.

Furthermore, although automation is reducing the role of the humans in production of automobiles, the role of humans in reinventing automobiles in making them electric and autonomous has skyrocketed. So far, more than $80 billion have been invested in autonomous vehicle R&D alone. Hence, we should focus on harnessing humans' innovation ability for creating jobs and driving economic prosperity.

GAIN OF LABOUR CENTRIC JOBS: Often we hear that technology progression is a curse to factory workers of less developed countries. But we pay little attention to understanding how uneducated, unskilled labour force of those countries have qualified for factory work -- for producing outputs for the market of advanced countries. Did they create those jobs? Perhaps, NO. Instead, technological progression reduced the demand for knowledge and skill, making them eligible to perform factory work by relying on innate abilities. Hence, multinational companies brought those jobs to those countries for taking advantage of low-cost labour. It's worth mentioning that such development killed high-skill manufacturing jobs in advanced countries, as those expensive high skills were no longer required due to the more significant roles of technologies. Due to this effect, less developed countries got manufacturing jobs-giving an impression of finding a way of developing an industrial economy. But further technology progression creates the risk of taking away those jobs from less developed countries. As opposed to denying or complaining, we should realise and respond in a smarter way.

DECREASING DEMAND FOR KNOWLEDGE AND SKILL IN PRODUCTION: Often, we think that we need to offer more education and training to our future generation for making them eligible for jobs in the age of intelligent machines. But for what kind of jobs? If it is for the production of identical goods and services, there will be the decreasing demand for codified knowledge and skills that we mostly deliver through education and training programmes-as they are easy to automate. For example, no one pays engineering or science graduates for solving mathematical equations in optimising designs, as software has taken over that role. Such reality has already created new phenomena like hollowing out middle or juniorisation in advanced countries. Hence, if we keep focusing on the production of the same thing by importing the design of products, processes, and capital machinery, we will be facing a decreasing scope of utilising education, that keeps delivering codified knowledge and skill written in books, in creating economic value.

INCREASING ROLE OF KNOWLEDGE, EMPATHY, AND CREATIVITY IN INVENTION AND INNOVATION: Although there has been decreasing human roles on factory floors and eroding roles of codified knowledge and skill in the middle layer, there has been a growing role in scientific discoveries and ideas. In driving economic growth, priority has been shifting from natural resources and manufacturing to invention, reinvention, and innovation. For creating economic value out of ideas, we need to focus on sharpening empathy and creativity and building the ability to scale them up by linking them with science and engineering. As far as we know, machines will not be substitutes for these vital roles.

ERODING OPPORTUNITY OF LABOUR-CENTRIC ECONOMIC DEVELOPMENT: The 3rd industrial revolution created the demand for innate abilities of unskilled labour, as it automated the codified knowledge and skills. Such development brought factory jobs to the shore of less developed countries. Yes, many of these countries highly benefited from it. For example, Bangladesh's ready-made garments industry for export created 4 million industrial jobs. Industry associations, development planners, bureaucracy, and politicians are still pouring billions to scale up this model. But there are signs that such a model of creating industrial jobs will keep shrinking. Hence, less developed countries should look for other avenues in harnessing human abilities for creating economic value in the age of the fourth industrial revolution.

JOB POLARISATION EFFECT: Industrial revolutions have a natural tendency of creating a polarisation effect. It does not equally open or kills opportunities for all. Besides, it tends to wealth accumulation; but it also poses a threat of annihilation. For example, the British started suffering from wealth destruction due to the uprising of substitutions from America and other parts of Europe during the 2nd industrial revolution. On the other hand, less developed countries got factory jobs at the cost of high-skill manufacturing job loss in advanced countries during the 3rd industrial revolution. But in the age of the fourth industrial revolution, innovation of intelligent machines will be creating high-paying innovation jobs in advanced economies, while less developed countries will be suffering from loss of labour-intensive jobs by importing them.

TRANSFORM INDUSTRIAL POLICIES FOR LEVERAGING EDUCATION: Like many other less developed countries, the productive sector of Bangladesh could be divided into five major segments: (i) export-oriented manufacturing, (ii) import substitution of industrial products, (iii) agriculture and food processing, (iv) manufacturing of indigenous products, and (v) service. So far, Bangladesh has been relying on imported capital machinery, the design of products, and the recipe of the production process for adding value out of labour and natural resources. Due to the increasing role of automation, there has been a decreasing role of education for supplying codified knowledge and skills to create economic value in production or replication. To leverage education in economic value creation, Bangladesh must focus on redesigning products and processes with locally-produced ideas. Bangladesh must get into the global race of creating economic value out of ideas. Instead of giving incentives for sustaining a profitable path of labour-based value addition, it's imperative to focus on reinvention and reinnovation of both products and processes for transforming education into prosperity. Otherwise, policies for scaling up existing labour-centric industrial strategy will create an impediment to further progression by leveraging education.

TRANSFORM EDUCATION FOR DRIVING INDUSTRIAL ECONOMY OUT OF IDEAS: Due to the increasing role of automation, education and training for transferring existing codified knowledge and skill have been suffering from erosion of market value. Yes, codified knowledge and skill are needed for scaling up ideas. But in the absence of focus on developing empathy, tinkering, craftsmanship, and passion for perfection, meaningful ideas will not emerge. Idea competition, risk capital for startups, and other means are not substitutes for these virtues. Hence, education should take learners to real-life work as early as possible as minds are shaped in the early years of childhood. Instead of assessing memorisation capability and sharpening codified skills, education should focus on idea creating, perfecting, and scaling up capability for creating economic value in a competitive market. It's also worth noting that there is no natural linear correlation between education outputs like the quality of graduates, publications, and patents and economic value creation in a competitive market.

Industrial revolutions have been transforming the importance of human roles. The role of labour has been shrinking as automation increases quality and reduces wastage. But the role of ideas for improving products and processes has been increasing. Hence, the imperative of adding value out of ideas, instead of labour, has been growing. For graduating from labour to idea-based value creation, changes must be brought in education and industrial strategies. We should align both industrial strategy and education to sharpen appropriate capabilities and create a favourable scope of harnessing them to create economic value. In the absence of proper alignment, we will be ending up in sub-optimal exploitation of human roles in creating prosperity-and the gap will keep widening in the age of the fourth industrial revolution.

M. Rokonuzzaman, Ph.D is an academic and technology, innovation and policy researcher.