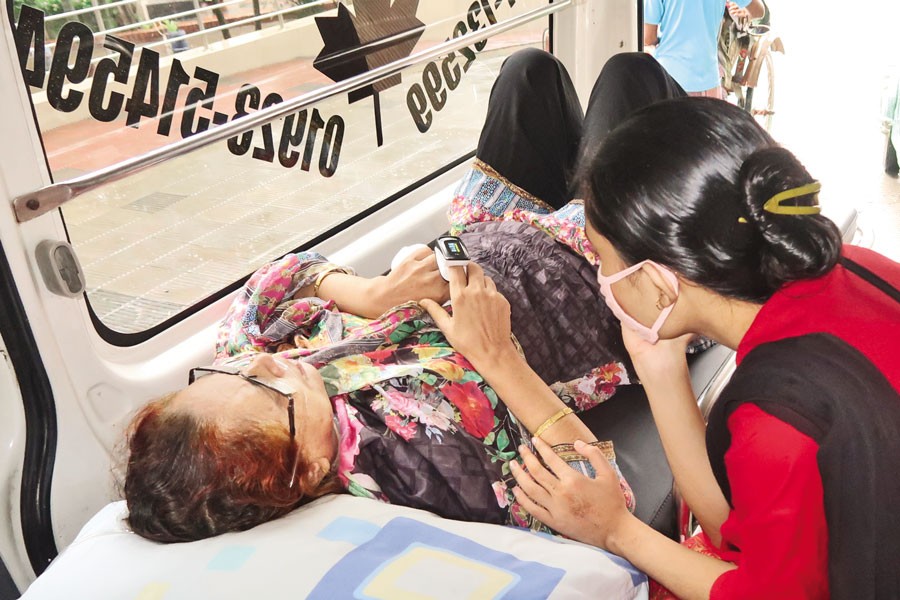 Bangladesh has made a commendable progress in the health indicators such as an increase in life expectancy, extension of sanitation coverage, vaccination for children and so on. Paradoxically, it is the health sector of Bangladesh which remains highly inequitable whenever it comes to access to health care, regional disparity, maldistribution of doctors and other health workers. Most importantly, the financial protection from extremely high health costs has worsened over the course of time. Now that Bangladesh aims to achieve universal health coverage (UHC) in line with the United Nations' SDGs (Sustainable Development Goals), it will need to strive for achieving all the key targets of UHC -- ensuring access, extending coverage and financial protection from catastrophic health costs.

Bangladesh was able to turn immunisation into a social movement in the past. National and international NGOs, development partners and the government worked hand-in-hand to improve the coverage. Even though the governance in Bangladesh remains largely poor, the involvement of communities coupled with active and passive participation of other stakeholders paved the way for achieving the health sector goals. Until UHC came into play, financial protection was not an explicit target. Currently, more than two-thirds of health expenditure are out of pocket. Due to lack of having any financial protection, health care costs have become catastrophic for many which pushes millions of people back into poverty every year. Hence, it can be claimed that something is wrong with our health financing mechanism. Is there any way of turning this around?

With a few exceptions, the global health system can be classified as the employer or insurance-based model (German's Bismarck model) and the government revenue model (Beveridge model). Of course, it varies in terms of the core exact process followed in each country but the spirit remains same. In the first model the compulsory insurance is used as a vehicle to achieve the universal health coverage and in the other model, the government takes the lead in ensuring healthcare for its citizens with the money they collect through tax. Bangladesh's health system is not close to any of the broad models explained here. However, Bangladesh so far followed the second model, i.e., the revenue-based model. Even though countries diverge in terms of the financing models used, one common feature of all successful health systems -- be it Bismarck or Beveridge model -- is existence of the 'purchaser-provider split'. The reasoning is simple, if the purchasers and providers are the same entity, there will be a conflict of interest, and therefore, the full potential cannot be explored and efficiency loss will be quite common. Therefore, the purchaser-provider split is not just desirable but also an important element for ensuring an efficient health system.

Even though the UK-based model, i.e., Beveridge model, shows some promise, this is not necessarily an equal performer in other countries as the context, political reality and influence may dictate the terms of the health system. Many health experts believe that health insurance can be a potential strategy towards UHC coverage. Even though theoretically it is appealing, its implementation on a large scale, say through social health insurance -- compulsory insurance for all-will pose an enormous challenge in the current health system.

Based on the experiences gathered from the successful social health insurance schemes such as the South Korean system, it is surmised that we need a strong body or organisation at the government level with good capacity along with full administrative authority to ensure insurance of the masses. Our current bureaucratic system may not be ready to provide such support. Of course, the government can collaborate with other countries where this type of health system is in place and learn from their successes and mistakes.

The second challenge -- maybe the most difficult challenge -- is to ensure the purchaser-provider split. Currently, the government acts as both purchaser and provider of services. A significant number of providers are working under the government. Hence, it is expected that there could be some resistance from them, if the government takes any step along those lines. This type of dissatisfaction is quite common for any such big reforms. Therefore, the government should be well prepared for this potential conflict of interest.

Good insurance practices are of paramount importance for a successful social health insurance programme. Unfortunately, the insurance market has not reached that level in Bangladesh yet. However, if the government becomes the insurer, then the government will need to make sure it forms a strong body that can handle such a massive level of activities involved with social health insurance. The movement's current structure does not have the technical strength to carry it forward. However, public-private partnership can minimise the problem associated with insurance activities. For instance, Vietnam has adopted an effective partnership between government and private entities.

One of the biggest problems Bangladesh would face when it decides to press on with the social insurance system is the premium collection. In general, a small number of people work in the formal sector and the government can set a premium amount for them easily. However, the majority of the population in Bangladesh work in the informal sector and hence there should be a concrete plan about how they will be brought under the umbrella. And for those who are in the formal sector, the government will need to overhaul the payroll taxes system.

No country aims to just increase insurance. Instead, all intend to extend the health coverage and health insurance is used as a means for that. South Korea ensured that all segments of the population irrespective of their locations got access to healthcare. In this pursuit they made sure that good quality hospitals and clinics were established at every corner of the country. Without a strong network of quality healthcare outlets, merely bringing people under health insurance will be futile. Currently, Bangladesh's health system is highly centralised. Hence, reaping the benefits of health insurance can be extremely challenging.

Now, if so many challenges are there, will Bangladesh be able to go for social insurance? Can Bangladesh afford to buy insurance for all, including the poor who cannot pay premium? The solution is: go gradually and reach the target over time. If the growth trajectory of Bangladesh continues to be good -- as forecasted by many national and international agencies -- the country should be able to achieve the universal health coverage. It would be challenging, for sure, but not impossible.

Shafiun Nahin Shimul, PhD is an associate professor of the Institute of Health Economics, University of Dhaka.