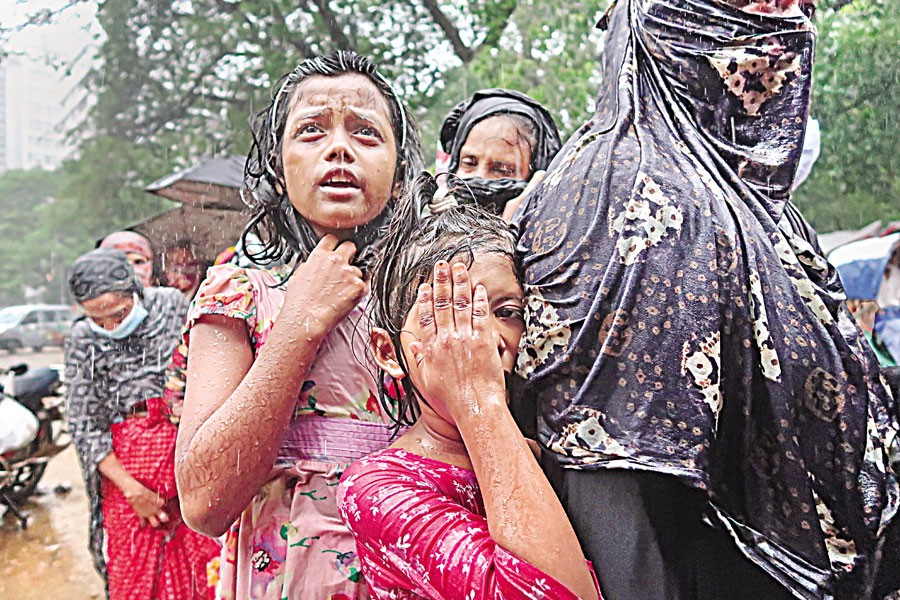 The battle for survival: Low-income people including children are dripping wet waiting in the rain for purchasing subsidised food items from a TCB-run truck sales point in the city — FE Photo

At the beginning of the 21st century, 34.3 per cent of Bangladeshis lived below the lower poverty line and almost a half (48.5 per cent) lived below the upper poverty line. Therefore, when the Household Income and Expenditure Survey (HIES) 2016 revealed that these rates came down to 12.9 per cent and 24.3 per cent respectively, the world turned its attention to Bangladesh. What does this progress explain? I joined the field of development practice in 2004 and have since worked extensively all across the country and then East and West Africa, Middle East and North Africa (MENA), South and South-East Asia. Over these years, the farmer that I first interviewed in a vegetable field in Poba, Rajshahi has gone from being an amused observer of an interviewer in Rajshahi speaking over cell phone to being a mobile banking service subscriber. However, at the same time, mobile money became so ubiquitous in countries like Somalia that even those making their living out of begging used their phones to receive money. Over these years, female labour force participation in Bangladesh increased from 27.4 per cent to 36.4 per cent while that of India declined from 30.27 per cent to 20.79 per cent and Vietnam remained stagnant at around 70 per cent (World Bank Data). The share of agriculture in percentage of GDP decreased from 19 per cent to 12 per cent while that of the world decreased from 5.0 per cent to 3.9 per cent.

The share of industries in percentage of GDP increased from 22 per cent to 29 per cent while that of the world declined from 29 per cent to 26 per cent (World Bank Data). If booming Dhaka and its neon-lit streets along with the flyovers and bridges are signs of progress, then I have seen the same development in many other developing countries in this time.

While some of the developments that happened in Bangladesh during this period resemble that of the world, I have also seen some unique developments that we can take pride of. Remittance grew from a mere 1.95 billion US dollars in 2000 to around 22 billion US dollars in 2020 (World Bank Data). Bangladesh started to yield the fruit of years of interventions in family planning.

The total fertility rate declined from 3.17 births per woman in 2000 to 2.04 births per woman in 2018. Industrial reforms and policy incentives pushed industrial sector employment up from 4.0 million jobs in 2000 to 12.4 million in 2016-2017. Services sector employment grew even further- from 9.2 million jobs in 2000 to 23.7 million jobs in 2016-2017. The achievement of Bangladesh in eradicating extreme poverty deserves special mention not because we did it better than others in the world- but because we achieved our progress despite challenges that are unique to us and unprecedented for others. Some of these challenges include:

There is no doubt that we have made progress. But poverty is not just numbers. More importantly, poverty is not just about the household wealth as we understand it through the economic indicators like income. In 2014, I was hired by the then Department for International Development (DFID) of UKAid to undertake a mission to define why a particular programme showed great progress in pulling some households out of extreme poverty while it failed to deliver the same results for some other households in the same location. I took cases out from their list and deep-dived taking a historical account of what happened with these households over last 5-7 years. A trend started to emerge and we started to see clear divergences between households who graduated and the households that failed. The households failing to graduate had greater exposure to health and natural shocks, were predominantly dependent on single income earners, had a disabled family member or had old aged family members. Despite series of interventions involving cash grant, asset transfer, micro credit, training on income generation activities and market linkage support, the conditions of these households barely changed. If they succeeded in generating some income, savings and assets over a period, these quickly depleted due to a health shock in the family or a natural disaster causing destruction to their house, livestock or agricultural land. The time here is a critical element. We observed that it took as long as 7 years for the most vulnerable households to pass through stages of rehabilitation, income generation, expansion and asset building before they become resilient to such shocks. Within this timeframe, these households may move up temporarily above the lower or even the upper poverty line, but the household's savings, assets, sources of income remain so thin that an exposure to a shock push them back to poverty almost immediately. This causes depletion of the assets and savings, increases household exposure to credit and creates sticky poverty, from which the household struggles to move out. The Covid-19 mirrored these findings and also showed that this picture was true for both rural and urban households.

Since the beginning of the pandemic, we, along with most other development agencies in Bangladesh, undertook a series of studies to understand the impact of the pandemic on extreme poverty in both urban and rural areas. While we might differ to the degree to which extreme poverty has increased in Bangladesh and I would prefer not to put an exact figure of the magnitude of the crisis, there is no debate that (i) urban poverty has increased, (ii) the impact has been disproportionately high in informal sectors and on informal sector labour, (iii) household food security and dietary diversity, especially that of women and children, are compromised, and (iv) minority groups (for example, sex workers and transgenders) and households with people with disabilities have been hardest hit. The worsening food security and greater exposure to credit along with depletion of savings mean that these households are now at a greater risk of intergenerational poverty. Another dimension, that has not been well researched, is the increased risk of non-communicable diseases among the poorest households as they have opted to reduce their health expenditure to withstand their income shock.

In this context, we must first acknowledge that what worked before might not work as we try to push for the final frontier in extreme poverty reduction. We are dealing with the population, who, despite decades of interventions, have remained poor and vulnerable. These households are living in the hard-to-reach areas and are at a greater risk of climate shocks. An estimate suggests 4.4 million Bangladeshis were internally displaced in 2020 due to climate risks (migrationdataportal.org). According to HIES 2016, around 6.94 per cent of the population of Bangladesh are living with disabilities. Extreme poverty is disproportionately higher among these households. Women-headed households in Bangladesh are on the rise. Estimates from 2017-2018 put the figure at 14.5 per cent. Extreme poverty is often dire amongst the women-headed households, as in the patriarchal society in Bangladesh women become household heads usually when they are widowed or divorced or abandoned. Extreme poverty is higher among the ethnic minorities. There are an estimated 2.0 million ethnic minorities in Bangladesh. As per one estimate from 2009, 60 per cent of the ethnic minorities in Greater Mymensingh and Sylhet were extreme poor. Researchers attributed extreme poverty of ethnic minorities to low economic opportunities, remote locations, exclusion, deprivation and dispossession of land. Then we have the marginalised households like the Dalits, the sex workers, the transgender people who continue to suffer due to social denouncement. Time-bound social safety nets often do not reach them due to systematic exclusion errors. Besides, the systemic failure of societal norms remains unaddressed.

All of these challenges, which already existed, have been compounded by Covid-19. This then means that while we should be on the track in reducing extreme poverty over time, we are drifting away further from that target. This drift then means that if we do not act now, the gap between our target and the rate of poverty would increase. As such, the resource requirement for extreme poverty reduction will also increase over time. Besides, the resource burden will be disproportionately higher on the national stakeholders, specially given that the international aid is shrinking. In this context, what should be our priority interventions?

The first priority should be to revolutionise the social safety net programmes. Measures that should be taken include:

- Making social safety net systemic, multi-level and multi-sectoral. Expanding the coverage of safety net and integrating it to cover enterprise loans and skills development support for longer term systemic and sustainable graduation of the extreme poor

The second priority would be inclusive economic growth which should have the following dimensions:

- Promoting economic diversification of households. Bangladesh needs to move up the economic complexity index (current position is 108th out of 132 countries)

- Strengthening investment in economic rehabilitation programmes for the people with disability, ethnic minorities

- Diversifying economic centres; reducing dependence on Dhaka and Chattogram which together account for 60 per cent of the country's GDP

- Moving up the international migration ladder; investing in both hard and soft skills

As can be observed, the recovery would require a long-term fix, an inclusive growth mindset, a gradual shift from handouts to a systemic change driven by the government and the private sector. If we do not start now, if policies continue to shift away from the reality on the ground, if we continue to measure growth in terms of fancy indicators that can always be played with to show progress despite downhill fall, we will continue to slide until probably we have a hard wake-up call.