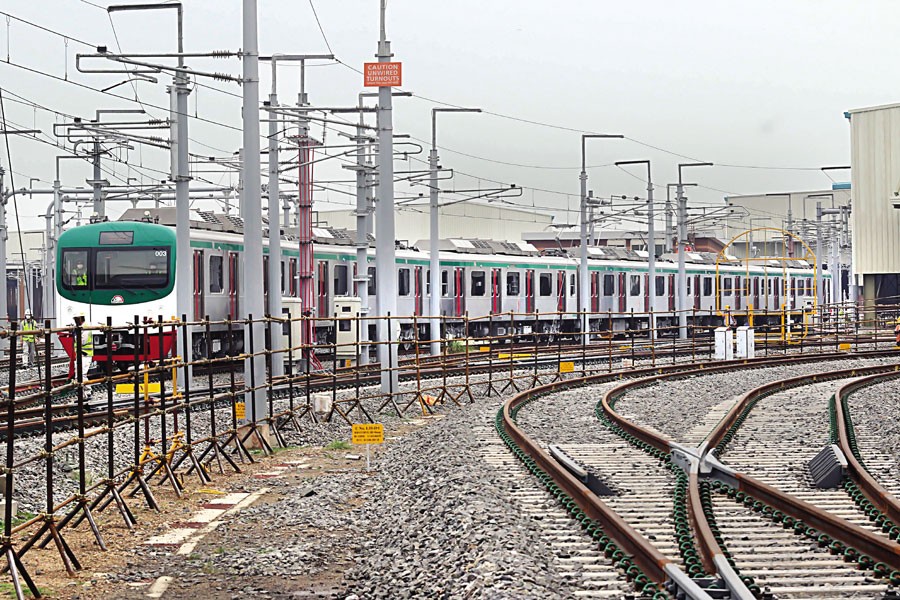 Dhaka metro rail is expected to get going by the end of next year. It will ease the traffic congestion in the mega city and also improve mobility of the commuters — FE Photo

Bangladesh has, of late, achieved the much-needed political stability that is a prerequisite for any nation to reap sustainable growth. Despite having countless challenges, the country has embarked on a trajectory with an excellent track record for growth and poverty alleviation. Leveraged by a strong demographic dividend and reliable RMG country share, it now stands tall among the speed-stars in the growing nations surpassing its neighbours in major economic indicators quite comfortably

Investment in infrastructure is essential for a long-term economic growth of a country. Key infrastructure assets can foster economic benefits by supporting urbanization, while industrial growth creates the path for better access to adjoining countries and stronger trade links, which can bring greater financial benefits in the ever-increasing competitive arena.

For a long time, Bangladesh has suffered from poor infrastructure which was a country-level hindrance to hack growth. According to The EIU's Country Analysis, Bangladesh ranked 80th out of 81 countries on the metric, with a score of 2.3 out of 10 in 2016-20.

Because of government's recent focus on building a strong infrastructure, many big-ticket megaprojects are coming into existence. Being a riverain country, it is extremely difficult and expensive to build modern transportation and communications networks which in turn makes the logistics a lot harder. But thanks to the myriads of highways and other tools of connectivity we have focused on, we have been able to mitigate this issue.

We have consistently ranked world-class when it comes to our manufacturing, export practices, low- wage employment forces due to our green and high-tech factories. Just this year, two of the biggest megaprojects in the history of the country have been announced to be nearing their opening to the public. The metro rail, once operational, is expected to save Dhaka a huge amount of time and money, something that is otherwise lost to the traffic we suffer from. The Padma bridge is expected to connect the southwest of the country with both the northern and eastern regions.

This, along with the other connectivity projects such as the work on the Dhaka-Chittagong highway, is expected to contribute massively to both alleviating the hardships of the people that are crossing between these places, and in contributing to the overall economic growth of the country (by making it easier to do business throughout the districts). This will lead to further rural economic growth and connectivity that will drive our GDP even higher.

A key ingredient for infrastructure development is cement and construction raw materials. Bangladesh is largely import-dependent in this sector. Supported by the low consumption of cement so far, the industry is lucrative to investors which leads to the surplus production capacity. However, the inclusion of government projects in the last five years at more exponential rates had dramatically changed cement consumption. Over the last five years just before Covid, the local market had experienced a double-digit CAGR. The first-phase post-covid rebound was also quite encouraging compared to other global markets. Despite being Covid- hit, megaprojects continue to get their rollout.

The effect of the international economy is indicated by the COVID-19 crisis. At the start of the lockdown in 2020, cement production in the country was lowered by as much as 60 per cent for the first two months. Although this was mostly due to a decrease in demand, it was also backed by the scarcity of raw materials on the international market. Later on, in 2020 and early 2021, the industry is pacing up to its status quo while still being hit by the rising freight which is in the very early stage of melting the over-burning.

The effect is already visible in the market. Brick shortage, increase in prices of other construction materials have overall inflated the construction expenditure by more than ten percent while the economy is still on the recovery despite performing relatively better than other economies. The price of cement is already up by around 15 per cent though raw materials' price even much higher in Q3 and Q4 of 2021 compared to 2020.

China's conservation policy, geopolitical tensions with Australia, India's prolonged COVID impact, oil-price regulations, and directives have all the effects on the commodities' prices.

As said before, along with cement, the construction industry was also hit hard by an increase in cement prices along with stone. Compared to 2020, the stone price increased by 60 per cent. This has already made a huge issue for the contractors of different PPP projects.

The government's Strategic Vision of 2040 and its ambitions of solid inclusion into the league of developed economy's pool through digitally enabled transformations are key national mandates for the next horizon. Massive employment through infrastructural projects, a more efficient and scalable supply chain aiming for driving overall economical efficiency, and finally supported by its continued pragmatic foreign policy will be key elements to retain this growth fanfare -- surely an interesting endgame to watch.

The author is CEO of Peakward Bangladesh Ltd.