Is Bangladesh suffering the Titanic's fate? 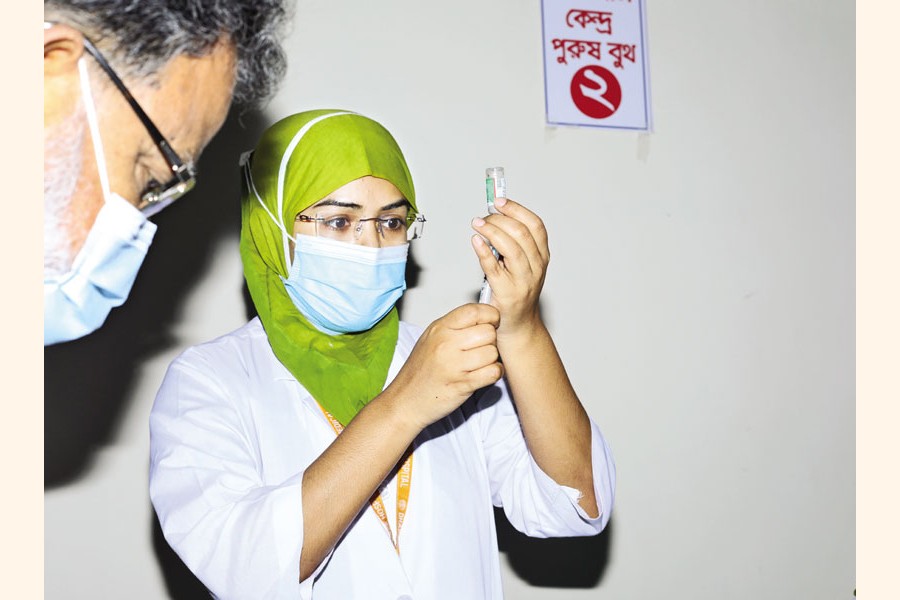 A nurse at an anti-Covid vaccine booth in Dhaka: Bangladesh has a target to administer 120 million doses of Covid vaccine by January next

Consider the final scene of the cult classic movie "Titanic," in which passengers frantically elbow one another for a spot in one of the few available lifeboats while a group of musicians continue to perform, recognising the impending disaster. The situation depicts every man for himself with no preparation for the catastrophe. Sounds familiar?

Clearly, Covid-19 has put the global economy into a very unexpected tailspin. With no pre-existing standardised programmes, the initial rollout of the Covid-19 vaccine has been a colossal mess globally. However, as we move into the second year of the Covid-19 pandemic, several regions like the United States and Europe have ramped up their Covid-19 immunisation campaigns to return to normality. As of November 11, 2021, 7.41 billion Covid-19 vaccines have been administered globally, with 51.5 % of the world population having received at least one dose.

To ensure equitable and fair access across participating nations, the World Health Organisation (WHO) developed a global mechanism, the COVAX facility, to deliver two billion doses of Covid-19 vaccines by the end of 2021, with the goal of procuring enough vaccines to cover 20% of the population in low-income countries. However, these efforts are severely underfunded. With 26.56 million vaccines being administered daily, only 4.2% of the people in low-income countries had received first dose of vaccine to date. According to the report "A Dose of Reality," published by the People's Vaccine Alliance, only 14% of the 1.8 billion Covid-19 vaccines pledged to low-income countries have been delivered until September. The inadequate gestures from western pharmaceutical companies having vaccine patents also prevail, as they manage to distribute only 12% of the doses allocated to COVAX. As the rich nations happily dip into the meagre supply of COVAX doses, the poorer countries have once again become captives to the whims and politics of their richer counterparts for donations. Are we witnessing yet another tragedy of the commons?

Although the Asia-Pacific region has previously lagged in pandemic response, countries such as Singapore, South Korea, Japan, and Malaysia have emerged as exceptions in Covid-19 vaccination campaigns and even surpassed the United States in terms of vaccine doses delivered per 100 people. The turnabout witnessed in these countries stems from (i) securing vaccination supply and (ii) ironing out glitches in their vaccination programs - the two aspects Bangladesh has struggled with since the beginning. 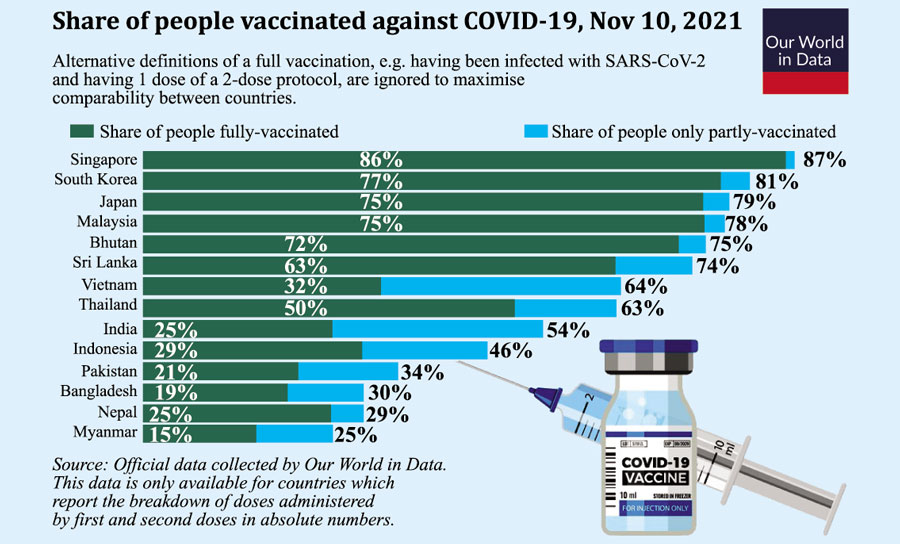 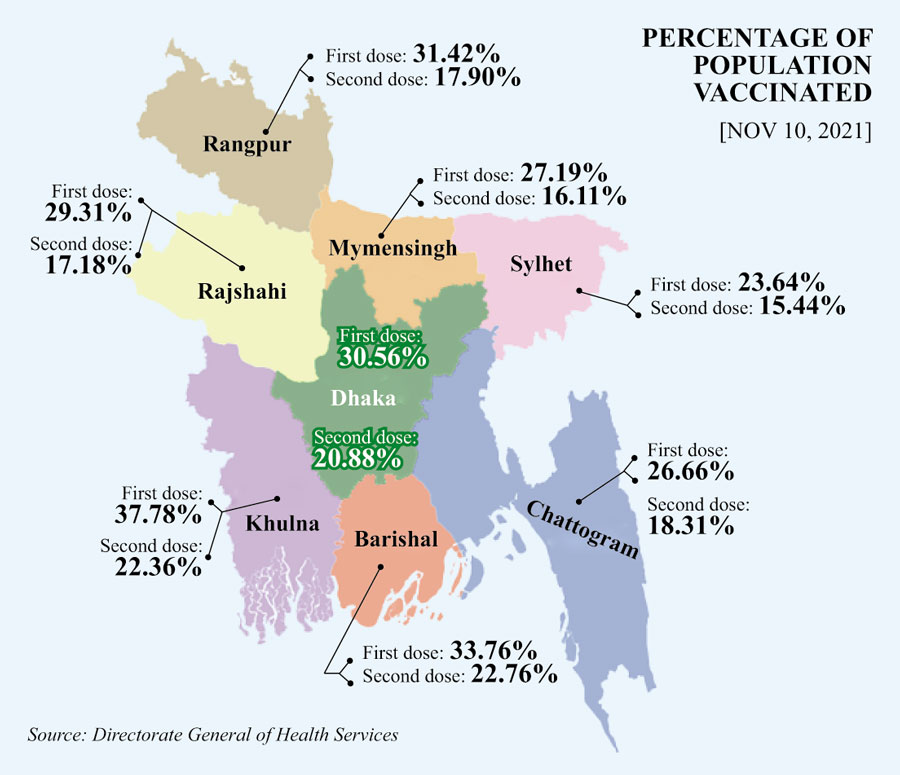 Despite Bangladesh's health expenditure as a percentage of GDP being the lowest in South Asia, at striking 2.34% in 2018, the government of Bangladesh was prudent enough to allow the private sector to negotiate with the Serum Institute (India) to purchase Oxford vaccines and start mass vaccination on February 7, 2021, utilising the pre-established Extended Programme of Immunisation (EPI). However, the inoculation process came to a sudden halt when India banned vaccine exports in April. The vaccination drive resumed in June, primarily due to the continuous support of China's Sinopharm vaccines, and has been progressing ever since, although at a glacial pace. Almost 300 days after the first mass vaccination, only 30% of the population in Bangladesh had at least one dose, compared with the world median of 51%.

Earlier in August, the government of Bangladesh launched a six-day special immunisation campaign (August 7-12), with a target of inoculating 10 million citizens without pre-registration. Although the vaccine drive was scaled back due to vaccine shortages, it managed to inoculate over 2.8 million people in a single day. In the second phase of this vaccination campaign (September 7-19), second doses of vaccines were administered to over 5 million immunised earlier under the drive. Very recently, another mass vaccination campaign with a target to inoculate 7.5 million people was launched on September 28 to celebrate the 75th birthday of the Prime Minister of Bangladesh. According to the Directorate General of Health Services (DGHS), about 90% of the target was met, with 6.8 million people inoculated in a single day with the first dose of China's Sinopharm vaccine, setting a new record for the country.The 8.2 million recipients of the first dose received the second dose of inoculation on October 28. Delays in the inoculation process definitely come with a high price tag. However, without ensuring equitable vaccine distribution across the nation, is rushing just to revamp the lost time a good idea?

Despite the acute lack of capacity in procuring enough vaccines, the government must be applauded for making the available supply freely accessible to everyone irrespective of class. In addition, the vaccine registration process is fully automated, and any Bangladeshi citizen with National Identity Number (NID) can register online. Now, this brings into perspective a glaring flaw in the process, an "intra-country vaccine disparity"-will people with no access to cell phones, computers, or internet get vaccinated?

The DGHS data on the vaccination campaign shows a clear manifestation of intra-country vaccine disparity. The map below depicts some key statistics of Covid-19 vaccination rates across the eight divisions of Bangladesh as of November 10. Given that Bangladesh has extreme centralisation of the public health system in Dhaka, we expected most vaccines to be administered in Dhaka division. However, it seems like the vaccination rate in Khulna division has been the highest, with 37.78% of the population receiving one dose and 22.36% receiving both. Similar vaccine inoculation rates for first and second doses are observed in the Barishal division (33.76%; 22.76%), Rangpur division (31.42%; 17.90%) and Dhaka division (30.56%; 20.88%). In comparison, only 23.64% and 15.44% of the population in the Sylhet division, which recorded positive peak rates of up to 33% in July, have received the first and second doses of vaccine, respectively.

Given the difficulty of distributing vaccination equitably to remote areas due to the digital divide and limited rural healthcare system, more vaccine disparities may be observed at the district level. For instance, in Cox's Bazar district, which is home to the world's largest refugee camp (Kutupalong refugee camp), vaccination rates for first and second doses are significantly below the national median at 20% and 14%, respectively. The same hold true in the districts, Brahmanbaria (21%;15%), Sunamganj (23%;13%), Habiganj (23%;15%), Sirajganj (24%;14%) and Gaibandha (25%;15%).

With global data by gender in vaccine distribution lacking in many places, experts fear that issue of gender inequality, largely due to misinformation and vaccine scepticism, is exacerbating the vaccine disparity situation in Bangladesh. According to Covid-19 Sex-Disaggregated Data Tracker, as of April 2021, women received 48% of the vaccines in Bangladesh, which is slightly lower than the global average of 53%. However, this average figure may be inflated as it predominantly centres around the major cities with mobile and internet coverage.

In Bangladesh, the gender gap in mobile phone ownership and mobile internet usage is 29% and 52%, respectively. A survey among rural households revealed that only 37% of households identified women as technologically capable. Moreover, the lockdown measures have restricted the face-to-face social networks women relied on for information prior to the pandemic. Clearly, fewer women are likely to receive relevant and trustworthy information regarding Covid-19 vaccinations. Indeed, a recent survey conducted by us in Khulna division recently found large gender gap in vaccine take-up exist, with nearly 55% of all the vaccine went to males compared to 45% among females.

Given the bottlenecks in health care delivery and the lack of broad social safety nets for marginalised communities, the authorities inevitably need to rethink their Covid-19 vaccination strategies. The most apparent is mass-scale initiatives to bridge the digital and gender divide, coupled with efforts to increase public awareness. During the early stages of the mass vaccination campaign, the government engaged community healthcare centres and union digital centres to register individuals. This effort can be expanded to include remote areas. Walk-in services for registration can be introduced. Female-only vaccination hub can operate or dedicated hours of operation for vaccinating females would encourage them to get vaccinated. The same can be said about poor areas such as slum dwellers in urban/town settings, and remote rural villages.In addition, leaders from political and religious groups and non-governmental organisations (NGOs) can be encouraged to promote vaccination awareness among the mass. The government must prioritise different groups and areas hard-to- to achieve vaccine equity across different socioeconomic groups. Ensuring reliable information and building trust among the local communities by creating awareness via information campaign should also be made to overcome misperception, hesitancy, or fear about the vaccine.

Nevertheless, the sole glimmer of hope is that we now have vaccines on hand, ready to be delivered across the country. According to the health minister of Bangladesh, more than 30 million vaccines are scheduled to reach the country by this month, and another 30 million doses are expected to be received in December. However, relying solely on foreign supplies is insufficient to vaccinate such a large population at such a high rate. The good news is the process of manufacturing Merck's Covid-19 pill, Molnupiravir, the first-ever pill to treat symptomatic Covid-19, has commenced in Bangladesh. In fact, most of the leading pharmaceutical companies have received recipe approval from the Directorate General of Drug Administration (DGDA). If all goes well, they will be able to manufacture and commercialise the pill in no time. In the fight against the pandemic, this drug could be a potential game-changer.

With a guaranteed supply of vaccines, Bangladesh does not necessarily have to suffer the same fate as the "Titanic". All we need is for authorities to put systems in place that improve communication, expedite vaccine delivery, and provide us with the assurance that we are not abandoned on the deck fighting for our lives.

Asad Islam is a professor of economics at Monash University, Australia.