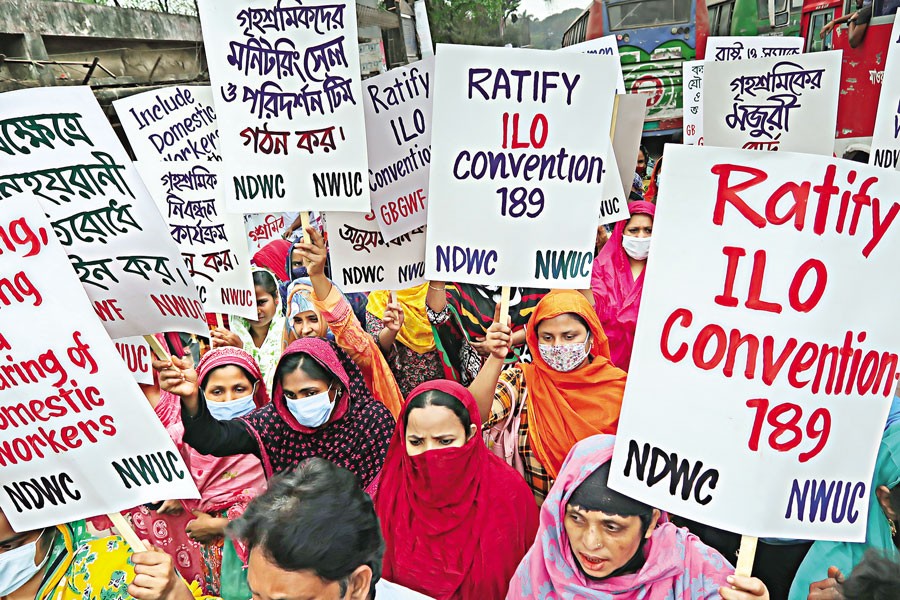 When I was a young undergraduate student, a fellow classmate's parent someday said to me over dinner something about women's status that requires to be cross-checked to know the real story. "It is amazing, the way your country empowers women," he said. It turns out that this individual - a well-known demographer - had spent part of his early career in Bangladesh. I lived in central New York - many of my classmates had not even heard of my country. And here I was, talking to someone who had actually lived there! But I responded to the comment with utter surprise.

This was in the 1990s the United States. The Bangladesh 'miracle' had yet to take the global development industry by storm. For twenty-year-old me, the country that this scholar spoke of seemed to have little in common with the one that I called home. In the Bangladesh where I had grown up, women were taught to never take their safety for granted.

Now, Bangladesh has surpassed many of its peers on certain gender- equality indicators. Women have made exceptional strides in education. According to the 2016 Human Development Report, women had five years of schooling on average compared to men at 5.6 years. On secondary schooling, they performed far better than their peers from other Medium Human Development (MHD) countries. In 2019, women scored 0.596 on the Human Development Index, trailing not far behind men at 0.660. Women also live longer than men, as well as their peers in other MHD countries. And yet, in 2021, Bangladesh found itself at the bottom of the Women, Peace, and Security (WPS) index. The country ranks 152 on this list, below Myanmar, Lebanon, and Iran.

This discrepancy does not come as a surprise when one examines the WPS indicators. The index incorporates three dimensions of women's wellbeing - inclusion (economic, social, political); justice (formal laws and informal discrimination); and security (at the family, community, and societal levels). It looks beyond popularly cited human-development indicators focused on health, education, financial literacy etc and into lesser-acknowledged dimensions of wellbeing - dimensions encapsulated in social norms and manifest in invisible spaces within the household and community.

This is particularly the case in Bangladeshi villages. Rural Bangladeshi women are subject to intimate partner violence, married before coming of age, and their families are forced to pay dowry to secure a good match for them. They lack decision-making power in the household. They are underrepresented in local government. When they do hold elected positions, their peers stifle their voices and ignore their opinions.

For rural Bangladeshi women, these issues arise in the context of informal institutions - the social norms that determine what people view as right or wrong in any society. Popular narrative tells Bangladesh's development story as the miracle that occurred in spite of massive institutional weaknesses. But most of these stories speak of institutions as formal governing structures. Telling a more complete story - particularly around women's security and justice - requires that one looks beyond formal institutions, the rules that exist on paper and into informal institutions, the unspoken societal rules. As Nobel Laureate Elinor Ostrom wrote in her book chapter "Institutional Rational Choice: An Assessment of the Institutional Analysis and Development Framework", these are the "dos and the don'ts" on the ground.

For example, consider dowry and child marriage. Written laws prohibit both practices. The Dowry Prohibition Ordinance of 1980 and the Dowry Prohibition (Amendment) Ordinances of 1982 and 1986 make giving or taking dowry a punishable crime. According to the Child Marriage Restraint Act 1929 and its 1984 amendment, women can only marry after they reach the age of eighteen, and men after they are twenty-one (the 2017 Child Marriage Restraint Bill allows exceptions to this). And yet, both practices are widely prevalent in rural Bangladeshi society.

The research I conducted for my book Village Ties: Women, NGOs, and Informal Institutions in Rural Bangladesh shows that many rural families feel that these practices were not just accepted - they were expected. Without dowry, families could not hope to arrange a wedding for their daughters. And child marriage prevails as parents did not want to miss a "good match" for their underage daughters. Such rationales persist even for instances where parents acknowledge that the acts are illegal and may even be risky for their children. Thus, parents' behaviours are shaped not just by their self-interest - or that of their children - but what is deemed as socially accepted. In this case, having their young daughters married is the social expectation. This responsibility becomes an enormous burden for poor families.

Village Ties explores how women's development organizations can provide women with the spaces to mobilize, and negotiate with both the government and societal actors to shift these informal institutions, the social norms that often clash with law, the rules on paper. Bangladesh has a long history of women's organization. And yet, in the last few decades, women's mobilization programs have fallen to the wayside as the development community has focused primarily on service-delivery programmes. To address the deeper issues around women's security, it is important to think about development as more than individual emancipation - rather, one must embrace the idea of development as institutional change. These institutions refer to the rules - both formal and informal - that shape the social order. They dictate what is accepted and expected in society.

Village Ties shows that women's mobilization programmes can shift those rules if the programmes take on three characteristics. It examines the work of Polli Shomaj, an initiative of BRAC's Community Empowerment Programme. It shows that such programmes need to be focused on institutional change. They must take on concerted, acknowledged efforts to shift local practices - this must be their only goal. These organizations have to be deliberative in that they must provide women with spaces to discuss their programmes and find their own solutions. Deliberation also allows women to construct knowledge around their particular local conditions. Finally, these organizations must be embedded in their communities. When the women have extensive social connections in their communities, they become aware of ongoing issues in their communities. Contacts at local Union Parishad offices, schools, or clinics, provide access to spaces where they can engage with local actors.

For example, when a potential dowry case arises in their village, women of Polli Shomaj typically hear of the incident through their personal networks. Generally, the women invite local actors to their bi-monthly meetings to lead discussions on local issues. Through some of these conversations, they may learn that dowry is illegal. They may also hear that it is a precursor to violence and thus harmful to young girls.

Through such deliberations they shift their understandings around social norms and collectively acknowledge the problems around dowry. To them, dowry is no longer an accepted practice. Thus, when they hear of a potential dowry case, the women may meet in a small group and decide how to approach the problem. They engage the bride and/or the groom's families to insist that the wedding proceed without dowry. Often, the women are ignored by the families involved. But, sometimes, they convince the groom's family to withdraw their dowry request. And, often, they persuade the bride's family to call off the wedding. How they shift these social norms lie at the heart of Village Ties.

For rural Bangladeshi women, security threats lurk everywhere. Their partners inflict violence on them in their homes. Strangers harass them on the streets. They are in danger of sexual assault in their immediate and extended families. And from the moment they are born, they are told that marriage is their ultimate destiny. This alone puts them at risk of dowry, child marriage, and further violence. Addressing the threats to women's justice and security needs requires a closer look at the informal institutions that allow such practices to persist.

Confronting these challenges is not an easy task. After all, how to shift social norms that are so deeply rooted in Bangladeshi society? How do we get people to shift practices that they accept as the only way? Often, when I would ask rural Bangladeshi women why they married their underage daughters, they would say, 'ekhane emoni niyom.' This is just how things are done here. The word niyom translates literally to rules. So are these rules to remain forever? Scholars argue that institutional change is possible. But it is difficult, slow, and often leads to unexpected results. After all, one is speaking of changing the entire social order. That can hardly happen in a day. And it rarely follows a prescribed path.

Individual emancipation may seem like an easier solution. Service- delivery programmes provide women with training, loans, healthcare services, and other means to take charge of their own lives. Once these services are handed out, the expectation is that women will use them to create better opportunities for themselves. But individual behaviour does not exist in a vacuum. We are social beings. Thus, our behaviours are often shaped by social expectations.

Bangladesh has undoubtedly made tremendous strides in women's wellbeing. But to address the crisis of women's justice and security, we need to expand our understanding of development beyond individual emancipation and embrace the need for institutional change.

From a research perspective, we can begin by prioritizing studies that illuminate the social order - for example, by looking at local practices, hierarchies, relationships, and power structures. On programming, the development community could prioritize women's mobilization programmes that create spaces for organization, deliberation, and negotiations with minimal interference from external actors. Such programmes will allow women to recognize their own priorities and pave their own way forward.

Nayma Qayum is an associate professor in Asian Studies and Global and International Studies at Manhattanville College in New York. She is the author of Village Ties: Women, NGOs, and Informal Institutions in Rural Bangladesh, published by Rutgers University Press. [email protected]