Bangladesh's prime port and its significance 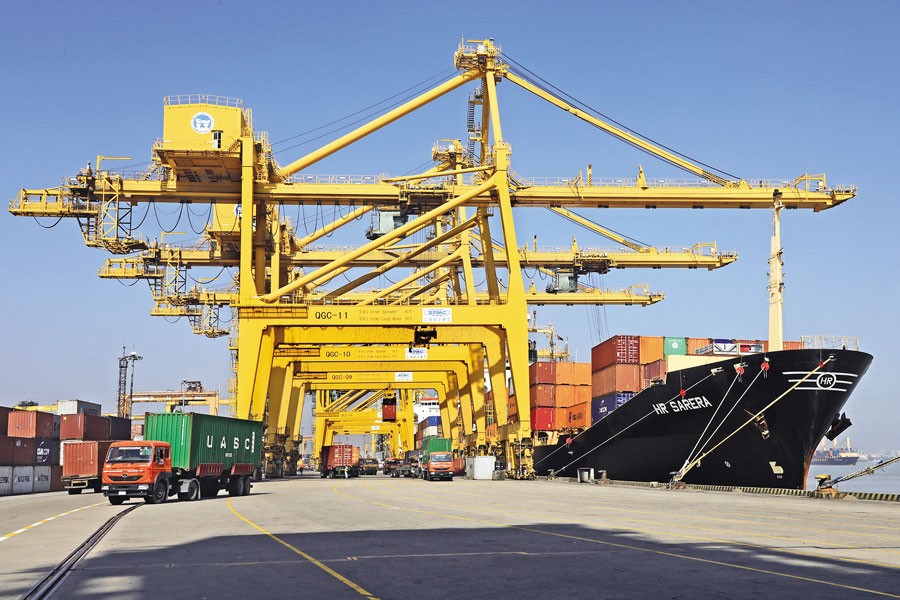 A partial view of the Chittagong Port

The Chittagong Port Authority (CPA) marks 134 years of founding of the port-management body in the current year, on a chequered canvas of the port's emergence and attaining prominence in global ratings. Chittagong Sea port, one of the oldest natural ports on the subcontinent and prime seaport of Bangladesh, is handling cargoes and containers under the management of CPA.

In a setback, however, Chittagong seaport has moved nine notches down to become 67th busiest container port among 100 top ports across the world, according to the latest Lloyd's List -- world's oldest journal on port and shipping. Earlier, last year, the position of Chittagong port was 58th on the Lloyd's.

The 2021 edition of Lloyd's List of One Hundred Ports was published on August 23, tallying up the annual container throughput figures of the world's elite port facilities in 2020.

On the other hand, the port also failed to uphold the position of the world list of three-millioner ports in the past year. Chittagong port handled a total of 30,88,197 TEUS containers from January to December 31 in 2019 while it handled 28,39,987 TEUS of containers last year (2020).

Mohammed Omar Faruk, Secretary of the CPA, said, "Chittagong Port obtained the 67th position among the 100 ports of the world. The corona outbreak hampered maritime trade from January to December last year (2020) which causes our port to become 67th. We hope that we will overcome the situation in the current year."

"We are working to realize the vision 2041 of the Prime Minister. We are already taking many projects for development of Chittagong seaport, which are undergoing now."

Md Jafar Alam, member of CPA, said, "It is fact that the port workers, staffs and officials are discharging their duties even on government holidays with the risk of corona virus. The staffs and workers worked hard during the government holidays in corona outbreak, causing the increase of growth rate of handling of cargoes and containers."

According to the sources, Chittagong Port, the principal seaport of Bangladesh, is situated in the estuary of the Karnaphuli River, which originates in the hills to northeast of the Chittagong Hill Tracts and flows into the Bay of Bengal. The main significance of this port lies in the fact that it provides a deep-water anchorage a few miles inland from the sea. The steering distance is 16 kms from the outer bar on the Bay of Bengal to the main berths on the bank of the river Karnaphuli.

The location of the port and its natural harbour made it an important centre of trade and business as far back as the 9th century AD when the Arab merchants found it to be a lucrative centre for trade.

By the beginning of the 15th century, Chittagong port was an important trading centre. Chinese Chronicler Ma Huan, who visited Chittagong in 1405 with a Chinese mission, refers to 'Chit-le-Gan' as a port frequented by Chinese trading vessels. The most frequent visitors to the port were the Arabs.

Among the Europeans, the Portuguese were the first to arrive at Chittagong. The Portuguese tried twice, without success, to capture Chittagong, first in 1517 under John de Silviera and again in 1527 under Alfonso-de-Millo.

Finally, they secured it and Satgoan, from Mahmud Shah, the ruler of Bengal, in return for helping him against Sher Shah Sur. Under the Portuguese, Chittagong prospered and became a commercial centre acquiring the title of 'Porto Grande', the great port, as opposed to Satgoan, the 'Porto Pequene'. In 1665-66 Shaista Khan, the Mughal Viceroy of Bengal, advanced on the port and took it by storm.

However, from 1971, the Chittagong seaport, country's commercial lifeline, is being developed as a modern port. With the birth of Bangladesh in 1971 trade through the port has expanded greatly. To cope with the rapid development and expansion of the port, the Government of Bangladesh promulgated the Chittagong Port Authority Ordinance in 1986 and dissolved the Port Trust.