Chattogram: History and progress into a hub 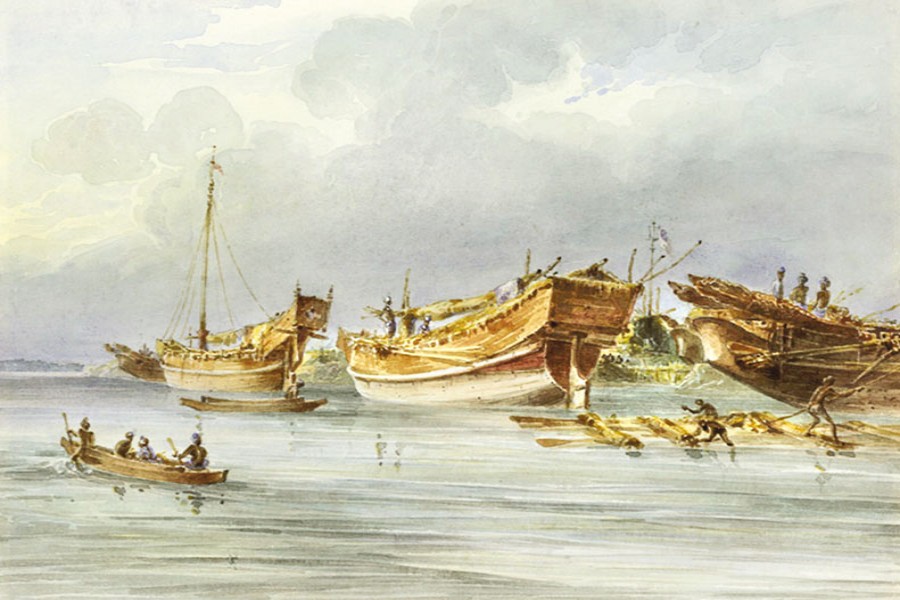 Between the deep sea and ranges of hills stands Chattogram, with a chequered history. The history of Chattogram dates back to ancient times of prehistoric era. Although its political status in prehistoric times is rather sketchy, the 'Periplus of the Erythrean Sea', a voyage logbook, documents a vivid picture of this city. Ptolemy, a famous geographer and historian, describes Chattogram as the finest port in the near and the Far East while the Great Malayan history claims Chattogram's link with Malay in the 4th century BC. Fa-Hien, Hieuen-Tsan, and Ibn Battuta, all portrayed Chattogram as mingled with ancient civilizations of the world.

Yemeni and Arab traders of Babylon used to trade with Greece, Macedonia and in the East with Java, Sumatra, China and sub-continental ports of Surratt, Cochin, Tamralipta and Chattogram. Chinese, Turkish, Arab and European traders used to trade with this part of the world through this maritime port.

Chattogram derived its name from the Arabic word Shetgang, delta of the Ganges. The Arabs called it the port "Samunda". The Portuguese called it "Porte Grande" (a great port). The Chinese named it Seetagong (great port of the west).

During British-India period, Chattogram Port reached its pinnacle of importance in the process of its metamorphosis. The growing importance of Chattogram Port as a gateway of this vast region and natural outlet induced the British to make it a business hub for this region. They made all necessary arrangements to link it with all parts of British India by rail and sea.

Under British Rule: Late 17th century A.D. earmarks the emergence of Chattogram as the strategically most important port of the then Indian subcontinent with the advancement of British rule. Though initially Calcutta port was given focus, later the colonial rulers realized Chattogram's potential and importance and the city emerged as the epicentre of commercial activities of entire northeastern Indian subcontinent, administrative activities remaining with Kolkata.

In fact, it stirred a hornet's nest when the headquarters of the then Assam Bengal railway was established in Chattogram, keeping in mind again the geographical and strategic importance of this seafront hub. A lion's share of the export-import trade of the whole of northeastern British India used to be done through Chattogram.

The Pak Era: With the partition of India in 1947, the port gained its momentum as the only one of East Pakistan, subjecting it to heavy pressure of mounting commercial activities. The Railway and the port immediately undertook short-and long-term plans, and during the fifties, nine jetties, including seven new, and a number of pontoon berths and moorings were constructed.

A good number of large-scale and midsize industries of steel, oil refinery, electrical cable and equipment, and paper mills came up in the Pak era. And many a renowned multinational companies started their operations here in Chattogram. Even several jute industries grew up in that period and almost all the head offices of bank and insurance companies, mostly owned by Bengalis, were located in this port city.

The main offices of the Chief Controller of Import and Export, Registrar of Joint Stock Companies etc were set up in Chattogram. Myanmar-or India-bound flights used to operate through Chattogram Airport.

The city population is diverse and multiethnic, and the native Bengalis have had significant influence from Arab, Afghan, and Mughal traders and settlers, all of whom had travelled in the city after arriving on its shores many hundreds of years ago. There are many Tibeto-Burman tribes that have been influenced by Bengali culture also living there, such as the Chakma people. The descendants of Portuguese settlers, known as the Firingi, also continue to live in Chattogram, as Catholic Christians, in the old Portuguese enclave of Paterghatta. But most of the population belongs to the religion of Islam.

The CEPZ, the first EPZ of the country, was set up in 1983 with the aim of increasing foreign investment in Bangladesh. Besides, CUFL, Kafco, and TSP complex are three major fertilizer factories of the country. Besides, Korean Export Processing Zone (KEPZ) and Mirerswari Economic Zone (MEZ) are almost ready now.

Chattogram is home to only two of the nation's most prominent public universities, and is the site for Bangladesh's one of the largest universities, the University of Chattogram, established in 1966. The university is located in a remote place from the city (22 km north) of Chattogram. With a modest beginning of 4 departments in 1966, the University of Chattogram has grown to 8 individual faculties, 35 departments, three institutes and as many research centres. It has three affiliated medical colleges under the Faculty of Medicine and one Veterinary Medicine College under the faculty of Veterinary Medicine.

The veterinary medical college has recently been upgraded to a separate university. As such, the number of faculties at present is seven. Current student enrolment is more than 15,000. However, Chattogram Govt Veterinary College (CGVC) has been converted to Chattogram Veterinary and Animal Sciences University(CVASU) which consists of one faculty with 300 students providing theoretical, out- campus work-based learning and excellent scientific and technological education. It is the first university in Bangladesh of this type.

Chattogram has public, denominational, and independent schools. Public schools, including pre-schools, primary and secondary schools, and special schools are administered by the Ministry of Education and Board of Education. Besides, Chattogram University of Engineering and Technology is situated at Rangunia. A new university named Chattogram Medical University is undergoing construction now.

The city had long been left in neglect by the Bangladeshi government until the turn of the century when exports grew by 21.13 per cent to an all-time- high $8.02 billion. Chattogram is the site for Bangladesh's busiest port which handles 80 per cent of all Bangladeshi imports and exports. The strategic location of the port has allowed for interest by investors to help improve the city. Major business houses such as M.M Ispahani, A.K Khan and Co. , Taher Group, Habib Group, PHP Group, KDS Group , S. Alam Group, Mostafa Group, Saad Musa Group, MEB Group, BSM Group, Kabir Group, and T.K Group are all natives of this place.

Places of sightseeing: Court Building is one. Situated on the Fairy Hill, this building commands a magnificent bird's-eye view of Chattogram city, particularly at night. This gigantic Judge's Court building was built immediately after the East India Company conquered and declared Chattogram as a separate administrative area in 1773. The building is huge, spanning over 250 thousand square feet, and has hundreds of rooms.

Shrine of Bayazid Bostami: This holy shrine attracts a large number of visitors and pilgrims. At its base there is a large pond with several hundred tortoises floating in the water. According to tradition, these turtles are descendants of evil spirits (djinn) who were cast into this shape because they incurred the wrath of the great saint who visited the place about 1100 years ago.

Chandanpura Mosque: Situated in the old city, the multi-domed mosque is an architectural sight to behold.

World war II Cemetery: In this well-preserved cemetery at quiet and picturesque place lie buried over 700 soldiers from Commonwealth countries like Britain, Australia, Canada, New Zealand, India, Myanmar, East and West Africa, The Netherlands and Japan who laid down their lives on the Myanmar front during the World War II. The War Cemetery is located in a hillside sloping place, in the southwestern corner of Chattogram Medical College Hospital, beside the Badshah Mia Road of the city. The total area of this cemetery is eight acres, which is protected and supervised by the Commonwealth Graves Commission.

Foy's Lake: Set amidst panoramic surroundings, this ideal spot for outings and picnics is thronged by thousands of visitors. This lake was created in the natural environment in 1924 at the initiative of the then Assam-Bengal Railway. This lake has been created by building a dam based on a plan by an English Engineer, Mr. Foy. The picturesque Foy's Lake is endowed with valleys and hills. The total area of the lake is 3336.61 acres of land, of which 48.75 acres are water bodies. The Railway authority acquired the lake area in the early last century. Then civil engineer Foy created the lake by erecting an embankment there. Since then, it has been known as Foy's Lake.

Patenga Beach: The sandy beach is situated at the meeting place of the roaring sea and the river Karnaphuli. Patenga beach is about 22 km from Chattogram and is approachable by a motorable road. On the way to the beach one passes the Patenga Airport. Another ideal picnic spot is the Fouzdarhat sea-beach about 16 km from the city.

Zia Museum: The government Circuit House where former president Ziaur Rahman was assassinated has been turned into a museum.

The Hills: The Hill Tracts is divided into four valleys surrounded by the Feni, Karnaphuli, Sangu (Sankhu) and Matamuhuri rivers and their tributaries. The ranges of hills of the Hill Tracts rise steeply, thus looking far more impressive than what their height would imply, and extend in long narrow ridges. The highest peaks on the northern side are Thangnang, Langliang and Khantiang while those on the southern side are Ramu, Taung, Keekradang, Tahjindong (4632 ft, highest in Bangladesh), Mowdok Mual, Rang Tlang and Mowdok Tlang.

Lakes: Famous Kaptai Lake, the largest "man-made" lake, spreading over 680 sq. km. of crystal-clean water flanked by hills and evergreen forests, lies in the Rangamati Hill District. The lake was formed when the Karnaphuli river dam (153-foot high, 1800-foot-long crest) was built for the purpose of hydroelectric power project at Kaptai. The old Rangamati town was submerged under lake waters and a new town had to be built later. The lake is full of fish and provides facilities for cruising, swimming and skiing. There are also facilities for angling and short trip by Sampan, the local name for country boats.

The forests: The valleys of the Hill Tracts are covered with thick planted forests. The vegetation in semi-evergreen to tropical evergreen is dominated by tall teak trees. The natural vegetation can be seen best in the Rain-khyong valleys of Bandarban district. This district provides the country with valuable wood used for various purposes, besides supplying wood and bamboo for the Karnaphuli Paper Mills and the Rayon Mills situated at Chandraghona. Here a tourist may be lucky to see how huge logs of wood are being carried to the plains by tamed elephants.

Shah Amanat International Airport: It was constructed with the financial assistance of the Overseas Economic Cooperation Fund (OECF) of Japan at a cost of about Tk 5410 million in 1998.The international airport complex comprises 2690-meter-long runway and 60- meter- long stop way, extension of runway 250 m, strengthening of runway pavement, construction of exit taxiway, one apron for accommodating two DC-10, one B747 and one A320 aircraft, an 18,600 sq.m one and a half- level passenger -terminal building for international and domestic services, a 2700 sq.m cargo building, a 2400sq.m operation- control tower and administrative building, car park and access road, and installation of AIR NAV system, radio communications and meteorological equipment.