Quests for a new economic model

The question of whether economics needs reform never seems to go away. The reason is simple. It is that the ultimate subject matter of economics is of intense, universal interest: nothing more nor less than how human society really works - and how it might be made to work better.

For equally obvious reasons, every new social and economic crisis gives the debate a fresh dose of adrenaline - and the Covid-19 pandemic has been no exception.

There could not be a better time, therefore, for Diane Coyle and Steve Keen to set out their respective visions of how to make economics fit for the 21st century in their new books, Cogs and Monsters and The New Economics.

Both authors are distinguished academic economists. But there the similarities end. Coyle is the establishment insider, both in intellectual (Harvard PhD, Cambridge chair) and professional (ex-UK Treasury, CBE, numerous public appointments) terms. Her past critiques of economics have been subtle, measured and practical. Previous salvos, though rich in serious argument, have travelled under playful titles: The Soulful Science and GDP: A Brief but Affectionate History. Keen, by contrast, is an inveterate maverick. A leading light of heterodox economics, he carved out his academic career in unfashionable university departments (the University of Western Sydney in 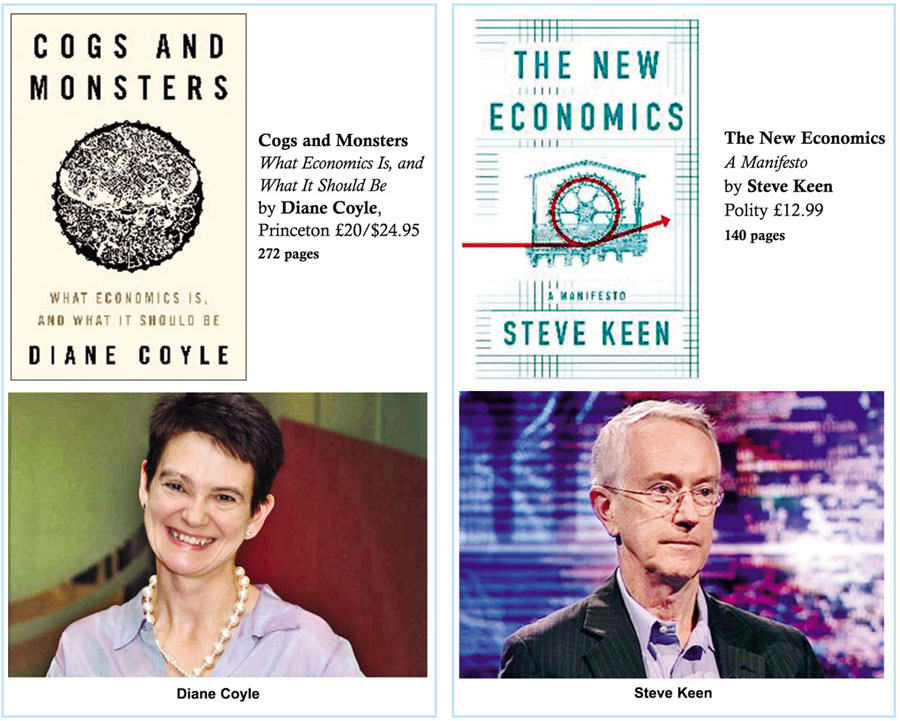 Australia; Kingston in the UK). The closest he has deigned to come to the establishment is his current tilt at the Australian Senate under the banner of the mould-breaking New Liberals party. Rather than diplomatic niceties, he revels in Antipodean bluntness: the title of his most famous book is Debunking Economics. These two very different authors share an identical starting point. This is that contemporary macroeconomics - the part of the discipline that grapples with national output, unemployment and inflation - is in a truly lamentable state. From this point of unanimity, they take off in opposite directions.

Coyle dismisses macroeconomics as a lost cause, and so focuses almost entirely on microeconomics - the analysis of individual and company-level behaviour. Keen, by contrast, deems the analytical framework used by bond investors and central banks far too important to write off. The new economics of his title is therefore primarily a reconstruction of macroeconomics.

Coyle's book has two central themes - neatly summarised in its title. The first is a criticism of modern microeconomics as preoccupied with an inappropriate conception of human beings as mechanical and individualistic - as discrete "cogs" in a giant social machine - and of a misplaced confidence in the separability of positive and normative analysis.

Pristine analyses recommending optimal economic solutions that are nonetheless politically unachievable are useless The second is a vision of a reformed discipline able to successfully guide public policy in the increasingly digital economy of the 21st century - one in which phenomena such as "network externalities" and increasing returns are not the rare and exceptional "monsters" they appear as in today's economic models, but the default assumptions on which tomorrow's theories are built.

Coyle's treatments of both these themes are eloquent. But against the background of policymaking during the coronavirus crisis, the first, the "cogs", is especially thought-provoking. Two arguments stood out. The first is that when trying to direct social behaviour, policy interventions that do not properly account for the innate ability of human beings to understand, adapt to and ultimately also to game those interventions are doomed to failure. A second, related, point is that pristine analyses recommending optimal economic solutions that are nonetheless politically unachievable are useless - often counterproductive. Economics without political economy, as the joke goes, is like mixology without hangover theory.

In my view, Coyle is correct that confronting these two points is essential if microeconomics is to have a future as the premier framework for the development of public policy.

Keen's manifesto for the reform of macroeconomics is also structured on the need for the discipline to confront a combination of both longstanding and more contemporary challenges.

Three in particular take priority: how to incorporate money and finance into macroeconomic modelling realistically; how to understand the intrinsic complexity of social processes; and how to reconnect economic analysis with the increasingly urgent constraints imposed by energy use and the environment. The result is a book that is more constructive, but also considerably more technical, than Coyle's. More constructive because it devotes less space to spelling out what is wrong with the existing framework and more to putting forward a concrete alternative. More technical because that concrete alternative is embodied in a novel computer-based method of modelling the economy as an unstable dynamic system.

I don't know which of these two theories of change will prove correct - but I hope one of them does I think most readers will come away from both these books convinced by their shared thesis that economics needs reform, even if they find Coyle a bit too vague on the details of what that the economics of the future should look like, and Keen a bit too specific.

Yet there remains the biggest question of all: how any reform will actually come about. Coyle argues that the digital revolution will eventually force economists' hands - so though change may be slow, it is more or less inevitable. Keen is less optimistic. He sees modern macroeconomics as having proved consistently immune to glaring falsifications of some of its fundamental hypotheses. Hence The New Economics' revolutionary subtitle, A Manifesto. It is written not to interpret economics, but to change it. I don't know which of these two theories of change will prove correct - but I hope one of them does.

As the pandemic has just demonstrated - and the climate crisis now threatens - if the ability of economics to provide convincing guidance on social policy continues to slip, other disciplines, much less troubled by its noble ambition to integrate the totality of human welfare into decision-making, will simply take its place.