Right move, but more needs to be done to make it foolproof 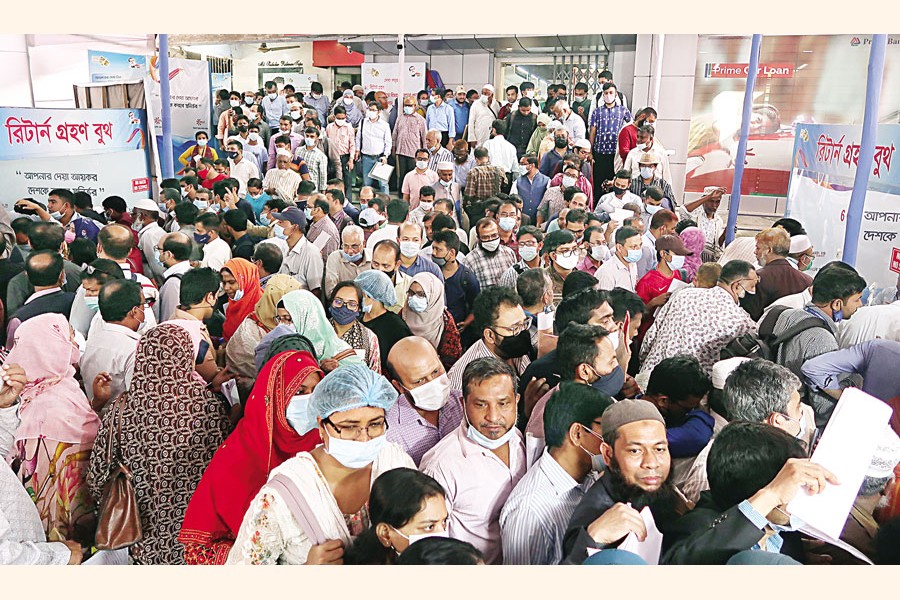 After a long hundred years, a new income tax law is going to be enacted by the National Board of Revenue (NBR) accommodating necessary piecemeal SROs/Orders /rules and relevant issues in a single place. It is definitely a praiseworthy approach as taxpayers will not have to shuttle from one place to another for an arduous job to look into relevant new changes of the past orders/policies. In a recent seminar organised by the NBR, an excellent presentation was made explaining the details of the new law, references used, long exercises NBR accomplished to prepare this intricate law.

For enacting the new law Income Tax Law-2022, the direct tax code 2012 was reviewed in the light of with IMF recommendations.

The English version of the draft law was reviewed and translated into Bengali by tax experts and then NBR examined the law for long eight months. NBR after a lengthy process of extensive exercises of tax policy wing has now come up with a ready draft.

It is of course true that the proposed law is much better, the language is simple and understandable. It has accommodated all changes so far made in the form of SROs to make it more user-friendly and taxpayers will be benefited. Besides, it has included some new elements such as; electronic tax payment system, procedures for submitting income tax return, wealth statement submission and its procedures, cost of living and to submit its statements etc.

In order to ensure flexibility, rules will be prepared, and NBR has been empowered to prepare rules, guidelines and different types of manuals. Also NBR has been empowered for tax holiday, tax reduction and exemption. Besides, NBR as per section 317, will be able to go for any announcement, clarification, explanation and directives. The proposed law has also ensured neutrality so that normal behaviour of business and investment are not hampered.

In most cases, formulae have been used instead of explanation, in order to ensure clarity for loss and profit adjustment instead of six specific clauses earlier, it has been presented in two specific clauses using mathematical formulae to give more clarity. NBR believes that use of mathematical formulae will give clarity to a complex implementation process.

All deeming income, meaning all financial assets an individual invested is earning a particular amount of income regardless of actual income earned, are consolidated into a specific section, in the proposed new law it has been shown in clause 19 and organized sector-specific division. Starting from 1922 all draft laws and rules of tax at sources, account management, depreciation, amortization and intangible assets, transfer pricing, alternative dispute resolution etc have been included in the proposed new law. Not only that all emerging issues including international practices have been included so that self assessment processes can be implemented easily, return process, return audit and related issues can be maintained as per international practices, also earning striping rules, draft amortization and refund policies have been included in the proposed law.

In order to reduce discretionary power of tax collector a number of formulae have been used so that there remains no need to use discretionary power of the tax people. Also there will be an audit guidelines, specific policies for collecting tax at source and collection examination procedures. It is also mentioned that accountability of the tax collector will be ensured, perquisite valuation, earlier it was a lump amount, in the new policy it has been substituted by the market value.

Besides there are some inclusion have been suggested in the new law such as limit for approval of interest to avoid thin capitalization, return submission of long term agreements, TIN registration for joint venture and their tax deduction, procedures of audit, internal transfer pricing, general anti avoidance rule (GAAR), international tax management, minimum tax for commercial motor car and shipping etc.

The above introduction of the proposed law claims that it is a timely initiative of NBR for a simplified, updated law for income tax. We are aware that the nature of tax structure has been changing gradually. In the past customs tax was the main source of revenue collection. Gradually the situation has changed. Now income tax and VAT are the main sources of tax collection. However, main principle of the tax is canons of equity. The tax burden has to be based on the ability and main targets should be economic development, where innovation will be the strategy. Tax imposition should not be arbitrary. The tax law is to be prepared in such a way so that it does not create confusion and at the same time increases the tax-GDP ratio.

One of the main targets of the law is to increase tax network and simplification of tax paying system through automation as much as possible. As has been seen that five new chapter and fifty new clauses have been included in the law to make it a self explained law.

One of the simplest way to comment on the law is that it has tried to accommodate new issues, making it as much as clear as possible. However, in the case of defining the new issues, there are confusions. Differences of using substituted terms, such as; in case of salaries only, it has made it clear by using the words, income from salaries, it wanted to mean that there could be different sources of salary income such as; salary, wages, remuneration, any types of allowance, bonus, commission, overtimes etc. or advance salary, perquisite, or additional allowance in addition to salary. There are six types of areas included under salary, in the definition these should be clarified clearly to make it easy for the mass people.

The scope of tax at source has been expanded in the new law, in chapter five, division-1, fifty four heads of income have been included which is the biggest chapter in the new law. Different types of taxes have been imposed, some new areas are; selling of electricity included. In some cases rate has been reduced, such as; income from advertisement (10% to 5%), income of rent (10% to 5%) while tax on surveyors for insurance companies has been increased from 10% to 15%, for forwarding agencies from 10% to 15%, basis of rates of tax at source is not known. It might have happened that rate of tax at source is higher than that of rate of income earning of the sector. In the seminar organized by NBR, a suggestion was made to carry out studies before imposing taxes at source. Otherwise it may increase cost of doing business.

In case of standard GP rate, similar thing is applicable, there should be a policy in that respect. Minimum tax was on six areas initially increased to thirty, which is a deviation of core tax policy. Tax at sources and minimum tax would need to be aligned with international laws and principles. Profitability index is another proposal to reduce sufferings of the tax payers.

NBR has been established through a Presidential Order in 1973 comprising chairman and members, there is a clause in the proposed act (318) under tax administration, a new inclusion is Member (Tax), enforcement and administration of tax policy is a much debated issue which has not been resolved through the proposed law. New inclusion will not resolve the problem rather aggravate the case. Clause 4(b) of 44 (of existing law), there is a provision to reduce/exemption tax rates by the government which will not be appropriate to be in the hands of the board.

There are some provisions included in the proposed law for aligning international best practices such as; earnings striping rules, amortization rules etc. Experts have cautioned that there should not be conflicts between the international laws and the national laws, specially in case of double taxation, domestic and foreign source status, anti avoidance issues etc. Because of mobility of labour and advanced IT technology it is difficult now to understand the place of management of a legal entity -- which needs clear definition in the law. There is a definition of company which also needs to be broaden to align the law with the emerging needs. Now there is double residency -- in the definition these should be made clear. Also foreign and portfolio investment, tax jurisdiction, permanent establishments, attributable income for long term agreement need be cleared. Tax treaties and treaty shopping are now exercised to keep companies away from paying taxes, should be considered in the law.

Section 333 is on electronic tax collection, meaning everything will be communicated electronically. Submission of return will be made electronically. Simple names have been included in the law, more details needs to be explained here, such as; TDS, AIT, income from different sources, payment made on the basis of receiving services from home and abroad, any exemption or rebate or deduction applicable needs to be incorporated in the electronic tax management system.

It is seen from the initial discussion that the draft of the new law needs further revision to make it a real and effective instrument to increase tax-GDP ratio. NBR has done an excellent job, no doubt. But it now needs to do more detailed exercises and consultations to make the proposed law a fool proof one. Otherwise the main objective behind enacting the law would turn out to be a futile exercise. The existing VAT law is a glaring example. Even after implementation, it is not delivering results up to expectations.