YREB of China could be a role model

The Chinese economic miracle has globally been recognised. There are some unique policy interventions playing a key role in taking the most populous nation to the current state of development. China that opened its market to the globe just 43 years ago is now a US$ 15.66 trillion economy. Yangtze River Economic Belt or YREB is one of the major policy interventions that, in fact, has helped China reshape its industrial and economic landscape after the economic downturn, which badly jolted the world's second largest economy in terms of nominal GDP (gross domestic product) eight years ago. 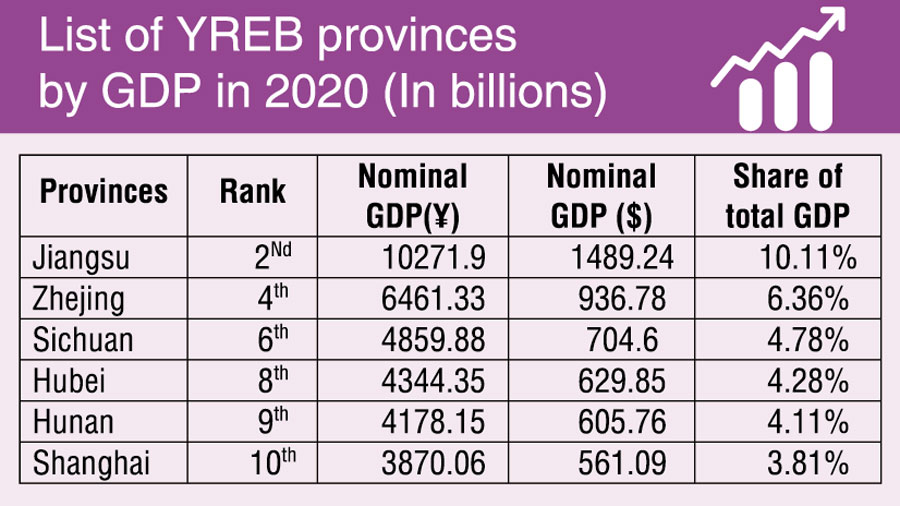 After the worst economic crisis due to severe liquidity crunch in 2013, the Chinese government came up with a decision of building an exclusive economic zone along Yangtze River to overcome the shock. Since then, the central government along with the provinces through which the mighty river passes spent billions of investments to build infrastructures and install state-of-the-art facilities to attract investors there. And the investments seem to have paid off because businesses in large numbers move to the area to gain maximum of the facilities.

The Yangtze, known in China as the Cháng Ji?ng or the Yángz? Ji?ng, is the third-largest in the world after the Nile and the Amazon. Originating from the Tanggula Range in Qinghai Province in western China, it traverses eleven provinces and cities from west to east, including Qinghai, Tibet, Sichuan, Yunnan, Chongqing, Hubei, Hunan, Jiangxi, Anhui, Jiangsu and Shanghai.

In fact, a triangle of exclusive connectivity has helped alter China's industrial landscape along the mighty river.

It means three types of exclusive communication system that makes it a lucrative area for industrial setup. Businesses alongside the river considers China-Europe freight train communication, facilities of inland river ports and high-speed trains are the triangle of opportunities that mainly drive the investors into the area.

Besides attracting investment or creating employment, the YREB is very important in the context of environmental protection because it would comparatively be easy for the authorities to control environmental hazards by allowing industries at that dedicated area in a planned way. The belt, at the same time, is going to be an unique example for modern urbanisation also. In accordance with the long term plan, clusters of cities with all kinds of accommodation facilities is being built to house people in the area in line with the future demand. That's why, it is being considered as backbone of modern Chinese economy.

China is the economy having the largest population and manufacturing base. So the country needs to export goods all over the world but the businesses had no other options but to depend on much expensive air traffic and sea-going cargoes for shipment of those products. But the special industrial belt gives them cheap and safe alternatives. To meet the growing demand of transportation of goods through the river, several river inland ports were built on strategic locations along the river over recent years and these were used by the businesses in carrying goods to various locations of the country through container-carrying vessels from and to Shanghai Seaport.

In another aspect, the economic belt is too important for the Chinese government because it is largely contributing to minimise regional growth disparity. As the 6300-kilometer river runs from least-developed Chinese western regions to developed eastern regions before pouring into the East China Sea at Shanghai. Industries are now moving towards the middle and eastern parts where comparatively lower cost of labour is available. So, it is not only about the transportation of goods but also the flow of people that in fact provides job opportunities for people from remote or less-developed areas. Growth of the 10 provinces and municipalities excluding Shanghai were all faster than the average level. The benefit of being located along the key industrial belt was also reflected in the list of China's most economically performing provinces as six of the top ten GDP contributing provinces to the Chinese economy are located alongside the belt while four others are in the top 18. This river also accounts for over 40 per cent of China's nearly 1.40 billion population and about 43 per cent of the gross domestic product (GDP). So it reflects how important the water source and how efficiently the fourth largest country in terms of area is using the fresh water sources for rapid socioeconomic leap of its people in a planned way.

With the building of a 6.15-kilometer-long bridge over Padma River, Bangladesh connected 21 least developed but highly potential coastal districts. The bridge means a lot for Bangladesh. The double-decker bridge, with road and rail tracks, is expected to contribute around 1.2 percent to the annual GDP growth, reduce poverty and increase economic activities of the people of the impoverished southwest region. The impact of the bridge will be manifold. It will remove the last great geographical barrier that divides our country. The country used to be divided into disjointed parts because of the two mighty rivers - Padma and Jamuna. With the construction of the Bangabandhu bridge over Jamuna, the first barrier was removed in 1998. Now, with the construction of the Padma bridge, we are close to moving towards an integrated and well-connected economy moving into the twenty-first century.

Bangladesh's per capita income has increased at rates much more than many of its regional peers. The rate of poverty has also gone down. Bangladesh is also ahead of South Asian and other least developed countries (LDCs) in several social indicators. These achievements could play a key role in overcoming post-LDC graduation challenges after 2026 through proper usage of the connectivity. On the context of SDGs (sustainable development goals), it will also help lessen regional growth disparity with improving livelihood of people living in the 21 southern districts.

According to a Japan International Cooperation Agency (JICA) study, a 10 per cent decrease in travel time to and from Dhaka will lead to a 5.5 per cent increase in district economic output. The annual average daily traffic would be around 29,278 by 2024, as projected by ADB. The benefits of the project would be equivalent to an annual increase of at least 1.7 percent of southwest region GDP in value and of 0.56 percent of annual increase of national GDP, according to the World Bank (WB) project appraisal document in 2011.

It also said the poverty reduction rate would increase by one per cent in the southwest region and by 0.8 percent at the national level.

It will also provide direct links between two major seaports of the country and will be an integral part of the Asian Highway One and Trans-Asian railway network systems (Sylhet-Kanchpur-Dhaka-Mawa-Jashore-Benapole, connecting Kolkata to the eastern part of India on the eastern side of Bangladesh), said the appraisal report of WB.

So, what we need to really gain from the mega infrastructure project is to develop a triangle of exclusive connectivity (through road, rail and waterway) that can ensure economic sustainability like the way YREB is delivering. The country now needs proper use of the Padma river as far as transportation of goods is concerned. The government several years ago developed Pangaon ICT but unfortunately it has not been a successful initiative yet. We urgently need to see where the problem lies and why it is not successful? These should be addressed immediately and take quick steps accordingly. Bangladesh does not have smooth connectivity in terms of roads and rail networks with its 21 southern districts, which covers approximately 27 per cent of the country and is home to nearly a quarter of its over 160 million population. With the building the Padma Bridge with a railway track its beneath, with road and rail tracks, the southern or coastal regions will be connected by air, rail, road and riverine routes. It will make it a lucrative zone for industrial setup in the way the Yangtze river reshape the Chinese industrial landscape. Padma River Economic Belt can be developed in the southern part. It is not only leading industrial activities or generating employment opportunities along the river but also minimising regional growth disparity that will give much needed economic impetus to the most densely populated country that aims to be a developed nation by 2041. Once the project is completed, local and overseas investors can get some space to take their industrial setup to the untapped areas at a lower rate. Another benefit would attract the investors as the Padma Bridge will reduce travel time between Dhaka and Mongla port, which is shorter in distance than the Chattogram port from Dhaka - Chattogram's 264 kilometres against Mongla's 170 kilometres. Greater movement of freight between Dhaka-Mongla port will also reduce the congestion at the Chattogram port. As Padma bridge gradually getting shape, many industries are flocking to either buy land or take plots on a lease, signalling future industrialisation in the country's southern region.

Padma bridge will also connect these areas with our neighbouring countries through the Asian Highway-1, Asian Highway-2, Asian Highway-41 and the Trans-Asian Railway-1 and 2 which will stimulate further investments. This connectivity, along with the ports in these regions can significantly increase government revenue through using port related and road related transport facilities. At the same time, the bridge will connect Payra seaport, which many think will be a key for the economy because of its geographical location. So, the question arises can Bangladesh replicate YREB type of investment-promoting infratructure along the mighty Padma river for changing industrial landscape of Bangladesh?

Reliable infrastructure plays a key role in economic growth. Studies have found positive relationship between infrastructure and economic output in many countries. Finally, as Bangladesh is working towards reviving the economy from the fallouts of the Covid-19 pandemic, the Padma River Economic Belt can help the country fulfil this effort to a great extent. It can also contribute towards achieving sustainable development.