Timeline highlights of IR: The adoption of Industry 4.0 in Bangladesh 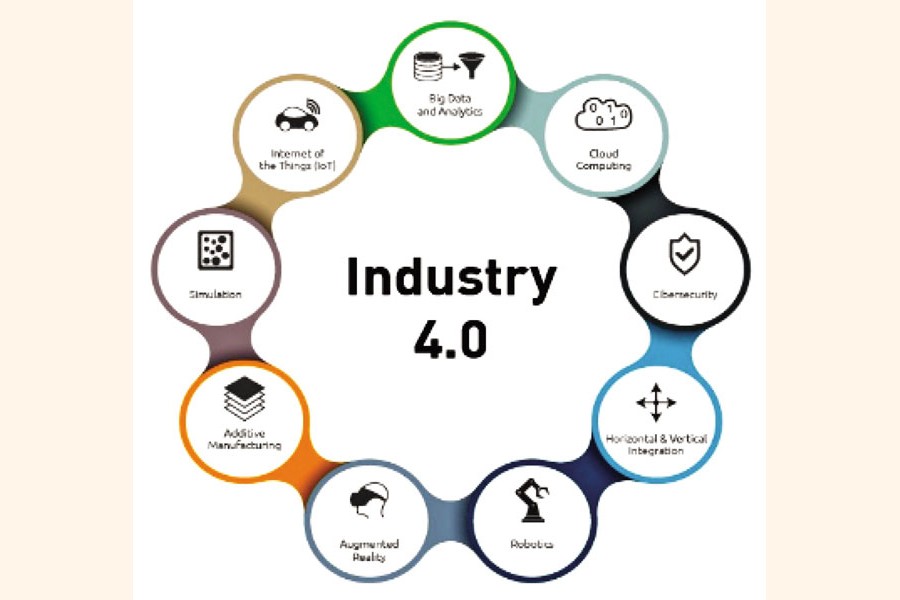 In contemporary history, the Industrial Revolution (IR) portrays the transformation from an agricultural and original economy to one dominated by industry and engine manufacturing. This process started in Britain in the 18th century and then developed to other parts of the world. The English economic archaeologist Arnold Toynbee first popularized the term Industrial revolution to represent Britain's economic development between 1760 and 1840.

The Second IR (Industry 2.0) developed approximately one-century success and was identified by mass production in new industries like steel, oil, and electricity. The light bulb, the telephone, and the internal flaming engine were some of the core discoveries of this era. Henry Ford (1863-1947) exerted the idea of mass production from a slaughterhouse in Chicago, which is known as the "Technological Revolution".

Timeline highlights: Oil is discovered in Titusville, which would shortly fit the center of the nation's oil drilling and refining industry(1859).Thomas Edison licenses the world's leading practical incandescent light bulb and upholds the spread of an electrical grid in New York City to power his invention (1879). AC displays the predominant means of power transmissions, and industry monotony allows electrical channels to increase swiftly (The early 1890s). The first data-processing machine surface was produced by the British to decipher Nazi codes during World War II(1943). Alan Turing distributes a guide paper considering the feasibility of designing a machine that creates, is considered the birth of AI (1950). As an educational system, AI is based on the probability of forming an artificial reasoning brain(1956). The American Government creates the first Data Centre to collect millions of tax returns and fingerprints by assigning all those documents onto magnetic computer tapes, stored in a single place(1965). Dick Morley sketches a record that led straight to the invention of the Programmable Logic Controller (PLC)(1968).

The Third IR (Industry 3.0) sprang in the 1960s with the contrivances of the semiconductor, the individual computer, and the internet after the end of the two World Wars. This is referred to as the "Digital Revolution."

Timeline highlights: The US Department of Defense's Advanced Research Projects Agency Network (ARPANET) produces many customs practiced for internet communications today (1969). The Japanese Waseda University forms the WABOT-1 project, designing the world's first full-scale intelligent humanoid robot(1972). Invented Ethernet, the first system for the overdrive of knowledge between computer systems(1973). As the foundation of a profitable version of ARPANET produced the first Internet Service Provider(ISP), known as Telenet (1974). Ethernet is regulated. The Domain Name System (DNS) establishes.edu,.gov, .com, .org, and .net system for naming websites(1983). William Gibson, an organizer of the cyberpunk novel Neuromancer, strikes the term 'cyberspace'(1984). Programmable Logic Controllers (PLCs) connected to Personal Computers (PCs) (1986). Tim Berners-Lee, a scientist at the European Organization for Nuclear Research (CERN) explains the HTML language and interjects the World Wide Web to the people(1989). The first-ever IoT device is displayed. John Romkey produces a toaster that is turned on and off over the Internet(1990). Tim Berners-Lee created the first web page(1991). The first audio and video circulated over the Internet and introduced Connectivity for PLCs(1992). The White House and the UN go online(1993). Amazon, Craigslist, and eBay go active. The Internet's transformation into a commercial business is completed (1995).

Wireless M2M technology has become widespread in industrial surroundings(1997). The Google search engine is displayed, transforming the way users employ the Internet. The Ethernet becomes familiar in industrial settings(1998). Kevin Ashton coined the term the Internet of Things(IoT)(1999). Yahoo! And eBay are hit by a large-scale DDoS outbreak, highlighting the vulnerability of the Internet(2000). Cloud technology grabs resistance with the launch of Amazon Web Services (AWS)(2002). The era of social media starts: Facebook goes active(2004). Roger Mougalas from O'Reilly Media issues the title Big Data(2005). AOL changes its business model, contributing most services for free and relying on promotion to produce revenue(2006). A group of organizations started the IPSO Alliance, to support the Internet Protocol (IP) in channels of 'smart objects', and enable the Internet of Things(2008). Blockchain and the first cryptocurrency eternally developed are presented to the world by Satoshi Nakamoto's whitepaper Bitcoin: A Peer-to-Peer Electronic Cash System. The IoT was 'born' from 2008 to 2009 when more 'things or objects' were related to the Internet than people(2008-2009).

The Fourth IR (Industry 4.0), was first proposed by a team of scientists revealing a high-tech strategy for the German government. The German economist Klaus Schwab, executive chairman of the World Economic Forum (WEF), interjected the expression in a 2015 article "Mastering the Fourth Industrial Revolution". The German federal government embraced the "High-Tech Strategy" for 2020. Subsequently, an expert group was formed to implement additional advice on the utilization, performance, and implementation of Industry 4.0. Industry 4.0 is based on the "Internet of things and services" after automation (Industry 1.0), mass generation (Industry 2.0) and computerization (Industry 3.0). The Internet of things and services is already an obligatory part of manufacturing in developed countries, particularly in the complicated industries of manufacturing and services, such as car production, aircraft production, insurance, logistics, and also the communications industry.

Industry 4.0 is a fusion of progress in artificial intelligence (AI), robotics, the Internet of Things (IoT), 3D printing, genetic engineering, quantum computing, and other technologies. It is the combined force following many products and services that are fast shifting essential to modern life. Industry 4.0 is a game-changer across manufacturing settings. The digitalization of production will develop how goods are made and selected and how products are serviced and purified.

Bangladesh is gradually and firmly applied its concentration to develop its economy through industrial development, shifting away from the agricultural sector after 1971. The industrial sector has historically been the sector that has accelerated growth as countries have transitioned from low to middle-income rank. Industry can produce high-wage employment for workers and increase social fecundity, providing high-value goods on a mass range. The vision of the Ministry of industries is to advance the participation of the industrial sector in domestic production from 25to 40 percent and accommodate all sorts of support in uplifting the labor force in the industrial sector increasing from 16 to 25 percent by 2021. Bangladesh needs the adaptation of Industry 4.0 not only to accelerate production but also to intensify economic growth. It can also be a core process for women to develop in the Bangladeshi business sector, where women are ignored in every state and are not permitted to take senior roles. Therefore, Industry 4.0 can be sufficient for the development of organizational administration and the advancement of female workers because technological integration will reduce the physical combination.

Industry 4.0 has not been widespread in Bangladesh, but it is imperative to meet the future intricate work environment and meet international patterns. It is high time to implement activities for the Bangladesh Government and the decision-makers of private organizations to achieve enormous benefits from Industry 4.0. Industry 4.0 can be adapted and implemented in the manufacturing and service industry. Since the development and demonstration of the technological structure are ongoing in Bangladesh, implementing Industry 4.0 elements should be blended into the establishment processes, is ensuing in other developing and emerging countries, such as China, India, Sri Lanka, Vietnam, Malaysia, and Thailand. The establishment of the manufacturing settings with Industry 4.0 is essential, not only to increase the generation of units but also to decrease the production costs. "Automation can improve gender differentiation, albeit there is no adequate gender-sensitive policy in our country to up experience the women workforce," S.Noman said 2020. To cope with this summary, concerning 43000 individuals' area unit given coaching beneath the Access to data (A2I) project (A2I, 2020), and nearly four lakhs' individuals get coaching below the Skills for Employment Investment Program (SEIP) program (Skills for Employment Investment Program, 2020).

The adoption of Industry 4.0 can produce significant complexities in Bangladesh. The private sector ought to additionally work beside the government to achieve this goal. The private sector should approach action to develop and assemble the skills of human resources according to the demand of the job market. They ought to additionally advance in the infrastructural improvement and create accurate exposure scales. Finally, it will be over that preparation should be established in the organization or observing period, and the government wishes to be prevenient concerning the betterment of the country for turning into a recipient of Industry 4.0.

The writer is a Ph.D. Scholar, Department of Economics, University of Chittagong,Bangladesh. Email: [email protected]