Woman entrepreneurship in rural Bangladesh: A long road ahead 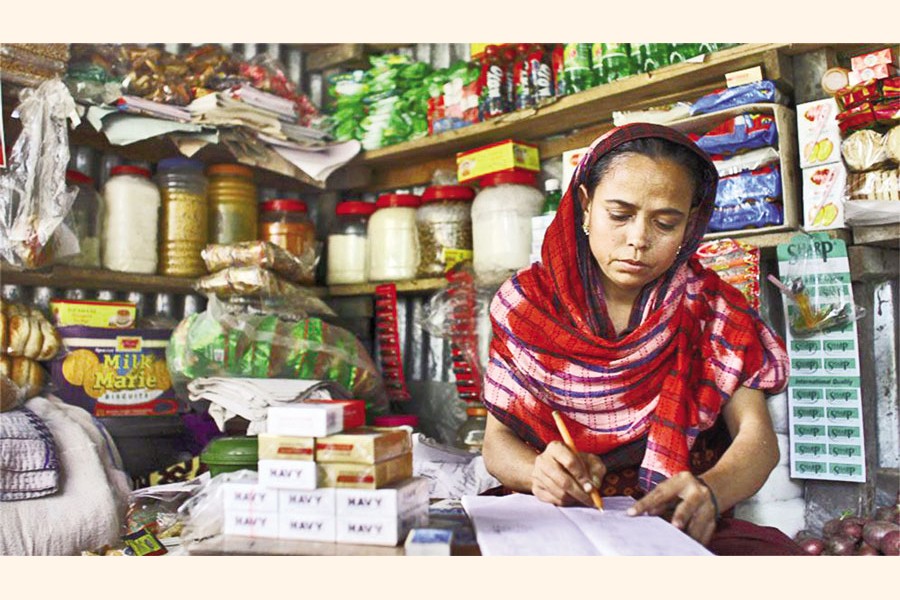 A woman at her store in Muladi of Bangladesh. Her business was established with financial support from an international financial institution — Panos Photo

Across the globe, there are an estimated 252 million women entrepreneurs, while another 153 million run well-established firms. Over the last 20 years, the number of female entrepreneurs has climbed by 114 per cent. And yet, despite their growing number every day, women entrepreneurs continue to lag behind their male counterparts in number.

The context of Bangladesh: Women in Bangladesh have made significant strides over the last decade in terms of coming out of their homes to engage with the economy. Women have made substantial contributions to the small and medium enterprise (SME) sector, which accounts for an estimated 25 per cent of Bangladesh's GDP (gross domestic product). These SMEs directly employ 7.8 million people and offer livelihoods for 31.2 million others. And yet the prevalence of female entrepreneurs in Bangladesh is not very encouraging. Women own less than 10 per cent of the total business enterprises in the country. Myriad factors come into play that disproportionately impede women entrepreneurs' onward march from starting businesses to scaling them up, such as regulatory environment, size of the firm, owner's level of education and training, cultural barriers, and so on. However, the most significant impediment to women's entrepreneurial success is a lack of access to finance. Bangladesh has been ranked 97th out of 106 nations in terms of women's access to credit, property other than land, inheritance customs, and social rights, according to the International Property Rights Index's Gender Equality (GE) measure.

• According to a recent Dow Jones research, lending to more women was associated with lower write-offs and lower portfolio-at-risk. So, if they are able to secure financing, women are more likely to repay debts in comparison to their male counterparts.

• Women entrepreneurs are also more likely to succeed in business because of their trustworthy reputation in the community. Global Entrepreneurship Monitor (GEM) results indicate that women-owned firms outdo those owned by their male counterparts.

• Women also tend to reinvest more of their incomes in "human resources" compared to their male counterparts. A study published by the Harvard Business Review stated that in emerging markets, women reinvest as much as 90 per cent of every additional dollar earned into their families' education, health, and nutrition compared to 30-40 per cent for men. Women-run businesses also tend to hire more employees than those owned by men.

• Additionally, a UNCDF study found that women who become entrepreneurs in Bangladesh are more likely to have fewer children than the national average, indicating that they are more aware of and open to family planning. Women entrepreneurs can also inspire other women in their localities to pursue entrepreneurship, especially within the closely-knit communities at the grassroots levels.

Benefits of investing in women-owned businesses:

• Statistics have revealed that organisations with more diverse management teams have up to 22 per cent lower turnover rates than the average. Low staff turnover is something that investors, hoping to earn a substantial profit, typically consider because a stronger, more stable company, which often also means a quickly growing company, has a lower turnover rate.

• Additionally, women are usually in charge of most of the household expenses. As a result, they are more likely to comprehend the viewpoint of the customers.

• Women are quite often better at building long-term relationships than men. Lasting relationships tend to benefit a business enormously, as there is only so much that can be accomplished without trust.

Yet, despite the transformational benefits, women's participation in the entrepreneurial space remains low in Bangladesh.

• The most significant barrier to women starting their own ventures is the lack of access to finance to use as start-up capital. To date, women struggle to obtain access to formal financial institutions. Lack of credit history, absence of official documents, and a general lack of understanding of the whole banking process, all act as huge barriers when it comes to women accessing formal credit. Microfinance often acts as a viable substitute for the rural women entrepreneurs in Bangladesh, however, often, the interest rates play out unfavourably for them.

• A lot of women do not have the much-needed formal training to commercially carry out their trade. Though many government and non-government initiatives are actively dedicated to training underprivileged female entrepreneurs on specific trades and skills, access to these training programmes is not available to every woman seeking them.

• Social barriers and family restrictions create another major obstacle when it comes to women's entrepreneurship. Culturally, women are still primarily seen as caregivers, especially in the rural context, and when they try to step out of the cultural deadlock to start their own initiative, they are faced with various forms of hostility dampening their spirits and efforts. These family and societal barriers reveal in various forms, which include, but are not limited to, a lack of formal support, restrictions on mobility, ability to network, and so on.

Thus, within the home and community, prevailing social norms and behaviours continue to construct hurdles to women's socio-economic empowerment.

1) Access to finance: Since inadequate access to finance has been identified as the key impediment to women's entrepreneurial ventures, it is expected that with better access to credit, micro-credit, or grants, women will be more likely to invest in their own start-ups.

2) Business Development Services (BDS): It has also been observed that a lack of necessary business skills and training leads to women not succeeding in businesses. Therefore, identifying and targeting the right women and offering specific need-based business training, mentoring, technology transfer, and strengthening women's entrepreneurial associations can result in improved business knowledge among women entrepreneurs and give them better skills, confidence, and agency over business decisions.

3) Improving Market Access for Women-Led Enterprises: Policies or efforts to expand markets and/or to introduce new market access for the goods and services produced by the female entrepreneurs can create the missing link between demand and supply.

5) Efforts to Increase the Agency and Empowerment of Women: Finally, activities to enhance women's decision-making capacity and address other societal barriers to female entrepreneurship will empower the women and give them the much-needed voice as they proceed with their entrepreneurial ventures.

These interventions can be delivered individually as stand-alone efforts or in combination as integrated interventions.

Final thoughts: With women comprising more than half the population in Bangladesh, accelerating women entrepreneurship is pivotal to its socio-economic development. Bangladesh, which has been the pioneer of microcredit, has seen what wonders women can do when trusted with capital. In addition, investing in women-owned businesses is profitable for private investors as well. If the government and the private sector come together to promote women-owned businesses, especially at the rural level, this would not only economically empower the women but also help tap into the unexploited potential of numerous women who are willing to contribute to the economy, however, due to insurmountable obstacles, they are unable to do so.

Babui Salsabil is a development professional with expertise in international development and corporate banking. She has worked across multiple development projects, donor agencies, and multinational banks across South Asia and the USA. Babui is passionate about promoting economic and social justice. Currently, she is working as a consultant in Washington DC, USA. [email protected]