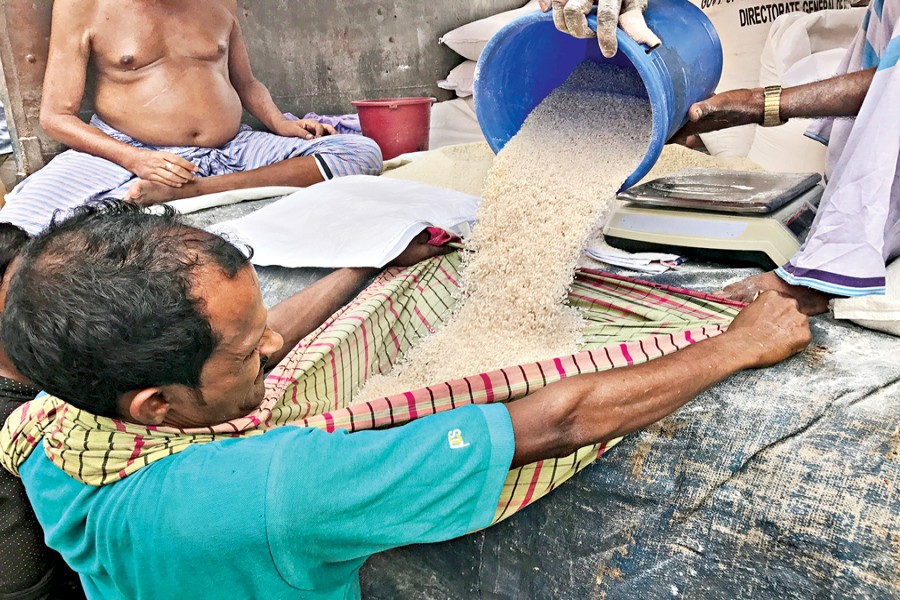 With pressure building on land and water resources, raising rice production is critical to improving food security in Bangladesh. Despite significant progress in reduction of poverty over the last two decades, still there remains food insecurity in the country. According to the 2017 Global Food Security Index, Bangladesh ranked 89th globally among 113 countries including Rwanda and Senegal. Bangladesh is also ranked lowest in this index among its major South Asian neighbours-India, Pakistan, Sri Lanka and Nepal. A 2010 report on "Bangladesh Grain and Feed Annual" prepared by the United States Department of Agriculture (USDA) also painted a similar picture. According to that report, out of the total population of 165 million in Bangladesh, 33 million were found to be lacking food security in 2010 and by 2020 it was estimated to hit 37 million.

So, improving the agricultural productivity should become the top priority for ensuring food security in the country. Despite progress in developing high-yielding varieties (HYVs), yields in Bangladesh still remain low due to limited cultivation of these crops by farmers. As the vast majority of the population still rely on agriculture for their livelihood, encouraging the use of new seeds and adoption of modern rice cultivation methods could raise the agricultural productivity. The System of Rice Intensification (SRI), developed in Madagascar in the 1980s for smallholder farmers like those in Bangladesh, has demonstrated dramatic potential for increasing rice yields in developing countries. The SRI is a rice management practice aimed at increasing the farm yield. It works by changing the management of the plants, soil, water and nutrients utilised in paddy farming. It involves transplanting single, young seedlings with wider spacing, carefully and quickly into fields that are not kept continuously flooded and whose soil has more organic manure and is actively aerated. However, it is knowledge-intensive and requires more labour for field preparation, water management, weeding and harvesting. The SRI is often billed as a pro-poor innovation as neither a new seed variety nor additional external inputs are required.

There are a number of studies aimed at understanding the impact, adoption and diffusion of the SRI in developing countries as it has drawn attention of the people by showing that significant yield gains are associated with adoption of the SRI. However, these studies across different countries in Asia and Africa point to an increase in rice production by up to 80 per cent associated with the SRI adoption. Most of these studies are, however, conducted on a small scale while some other studies are based on non-experimental impact evaluation. These studies suffer from typical criticisms such as farmers are self-selected, plots of land might be selected on the basis that they are suitable for the SRI.

Although the SRI has been introduced on a small scale on a pilot basis in some locations of Bangladesh, adoption and diffusion rates appear to be low, as happens in other countries. Given its purported productivity and earnings potential, low uptake of SRI technology seems rather puzzling. As SRI fields differ visibly from traditional rice fields, social norms and conformity pressure may likewise discourage adaptation and the ultimate adoption of any decision. In the rural Bangladeshi context, social (i.e. village, kinship or friendship) networks may offer a viable alternative and could potentially play an important role in agricultural technology adoption.

It is with these backdrops, in collaboration with BRAC I along with my collaborators from Stanford University and Cornell University, examined the adoption, diffusion and impact of the SRI in Bangladesh. BRAC implemented this intervention in 300 villages in seven districts across Bangladesh. These districts are Kishoreganj, Pabna, Lalmonirhat, Gopalganj, Sirajganj, Bogra and Rangpur. We randomly selected 180 (treatment) villages from these 300 villages for training and information about SRI before the boro rice cultivation in 2014 and 2015. We trained about 3,000 farmers from these villages. We did not provide training to any farmer in the remaining (control) villages. These treatment and control villages were randomly selected to understand what happens with and without training on SRI. We thus avoided the main criticisms of the previous studies-such as locations were selected purposefully which favours cultivation of the SRI. Similarly, some farmers in these 180 villages were offered training on SRI and they were also chosen through lottery. The farmers whose names did not come up in the lottery were not invited to receive the training from BRAC. Again, it was important to offer training through lottery since farmers who receive training might otherwise be different in terms of their propensity to adopt or productivity (e.g., they might be more skilled in cultivating rice, more educated and hence training might be more useful for them). This is the first large-scale randomised and controlled trial of SRI implementation in the world.

We provided farmers with training on SRI and taught them how to apply techniques to their farms. We also provided monetary incentives to a group of farmers to identify other farmers in the villages who are potential adopters of SRI and offered them the same training in subsequent weeks. In one case, we provided a fixed amount of financial incentive. In another case, we provided financial incentives to farmers, only for referrals, who ultimately adopt the SRI. We examine whether and how a farmer's decision to adopt a new technology depends upon the adoption decision of other farmers in his social group, and whether financial incentives play any role in selecting good quality of farmers who are more likely to adopt the SRI.

Our results show that when provided with the incentives for referral, one out of two farmers adopted the SRI as opposed to one out of three farmers when we did not provide any incentives. We also observe that farmers too can teach and motivate equally other farmers to adopt when we first train them and give them responsibility to teach. They also coordinate their decisions on adoption- when a farmer advises someone to adopt, the farmer himself also adopts even though he is not paid for adoption. Our results suggest that social networks at the village level could play a significant role in adoption and diffusion of new technologies, especially in the context of rice farming.

Though SRI technique involves some additional labour for managing practices and hence the cost is higher, we find that profit remains significantly higher than the traditional farming. We find that the profits are 20-25 per cent higher taking into account the higher labour costs due to intensive management practices. This is despite the less-than-perfect adoption of SRI and some farmers were unable to adopt the SRI despite their willingness to do so. The main constraint for adoption appears to be managing irrigation which many farmers could not follow as far as the SRI technique is concerned. The irrigation system, though privately-managed, requires collaboration among farmers of nearby plots of land to pump water at the same time. SRI adoption requires younger seedlings (15-20 days' seedlings) and hence the transplantation period is different from the traditional cultivation. Due to the constraints in the irrigation system, land preparation and transplanting were not as timely as required by the SRI practice. There is evidence that farmers who managed irrigation and followed the SRI principles in time reaped significantly higher profits.

We went to revisit some villages before the Boro season in 2015 to offer same information and training and share the experience of other farmers who adopted the SRI. This also enables us to understand whether farmers continue to adopt or not. Previous research has shown that while farmers readily adopt the high-yielding variety when introduced, there was significant abandonment of the variety in subsequent years. We find that a significant number of farmers who adopted SRI in the previous year did not adopt it in the subsequent years, though the majority of them continued to adopt.

We communicated our research findings to the government. The research was funded by the International Growth Centre (IGC) based at Oxford and LSE. This scribe along with IGC country director Dr. Sultan Hafeez Rahman met the minister for agriculture. She showed interest in it and asked the secretary of agriculture to share our research findings with the Department of Agriculture Extension (DAE) and Bangladesh Rice Research Institute (BRRI). We met both DGs of the DAE and the BRRI and scientists and research officers to share our findings with them. We found our meeting with the DAE very encouraging. Our results make it clear that the SRI has huge potential of improving rural incomes and helping achieve the overall food security aims and objectives. The DAE can help expand the SRI adoption. The BRRI also can help scale it up in different regions in different seasons. At least, the DAE can encourage its officials at its local offices to recommend the SRI adoption. It can also play a supportive role in promoting adoption of SRI in irrigation at the local level.