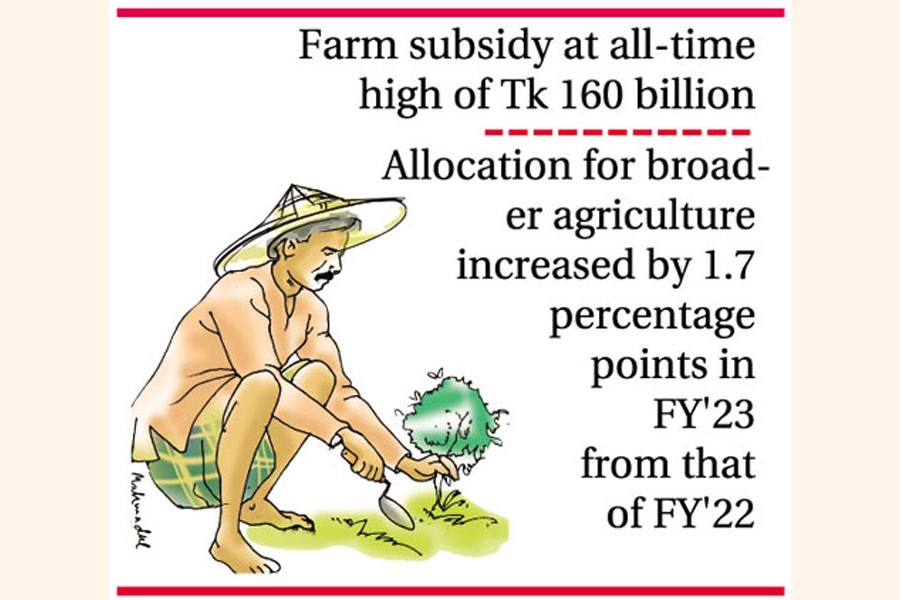 Allocation for the broader agricultural sector, including crop, livestock, fisheries and farm subsidy, increased to over 6.5 per cent (Tk 445 billion) of the proposed 2022-23 fiscal year (FY) budget.

More than Tk 445 billion has been earmarked for the sector against Tk 288.38 billion in FY22-above 53-per cent hike in nominal term.

A Tk 242.24 billion has been allocated for agriculture ministry and Tk 38.08 billion for fisheries and livestock ministry including their ADP (annual development programme) and operating budget.

However, actual subsidy in FY22 surpassed Tk 120 billion amid a 57-per cent, 47-per cent and 177-per cent hike in TSP, DAP and MOP respectively in the global market, according to Thursday's budget speech.

The ADP for the two agri-focused ministries has been increased notably, indicating the government's spotlight on research and development (R&D), additional agriculture secretary Balai Krishna Hazra tells the FE.

Farm sector is getting top priority to ensure a sound food security scenario even during this period of global of commodity upheaval, he added.

According to Prof Dr Mohammad Jahangir Alam, agri economics faculty at Bangladesh Agricultural University, subsidy is universally given but in different names, say it is called 'support' in the EU and the USA.

Subsidising in a country like Bangladesh is important given the importance of a particular sector as it provides food, income, employment, nutrition subsidies.

The sector earlier worked as a buffer during any natural shock or pandemic, cites Prof Alam.

"But the public treasury for this subsidy has to be spent with full efficiency so that farmers reap the benefits of subsidy and there is no leakage," he says.

"One caveat in the universal subsidy is that rich farmers benefit the most if we look at the distributional side of fertiliser subsidy."

"In economics," Prof Alam adds, "we know that scarce resources have to be distributed to the sector where return is high."

He suggests that the government continue with required support to the sector to curtail reliance on global market for major food commodities.