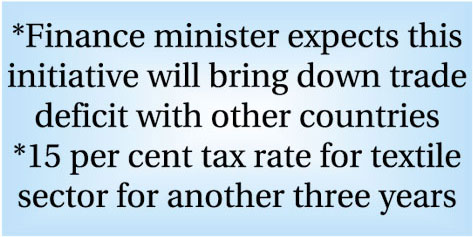 The country's export-oriented non-RMG (non-readymade garment) sectors -- both goods and services -- are going to enjoy an equal corporate tax rate as given to the garment sector in the next fiscal year of 2022-23.

The finance minister has proposed to introduce a 12 per cent and 10 per cent tax rate for all other general and green industries, exporting goods and services respectively, aiming to encourage diversification of export goods and ensuring a level playing field.

This sort of export-friendly initiative will bring down the trade deficit with other countries. As a result, the deficit in the current account, a major economic indicator, will be minimised, he said on Thursday.

He, however, has proposed to raise the rate of source tax on export proceeds to 1.0 per cent from that of 0.5 per cent.

The minister in the proposed budget also said service export should be given due priority alongside goods export.

"As a part of this initiative, I propose to include export of services in the definition of export in tax statute," he said.

His proposal also included exemption of the income earned in foreign exchange by ocean going vessels carrying Bangladeshi flag from paying tax until 2030 provided the income is brought to Bangladesh through a banking channel.

By adopting these proposals, he said, they will be able to establish service export as a potential export industry for earning foreign currency for the country.

The minister has also proposed to extend the 15 per cent tax rate for the textile sector for another three years until 2025 saying the valued taxpayers will take advantage of this long term preferential tax benefit and will feel encouraged to pay their due taxes.

In order to make RMG export more cost effective, VAT exemption on supply of goods under sub-contract between the manufacturing units when both are enjoying a bonded facility has been proposed.

To protect the textile industry, photosensitive rotary screen, temperature sensor and loaded PCB Board have been included in the list of tax exemptions.

To diversify exports, a tax exemption facility has been extended to the import of raw ingredients used in the footwear industry for the growth of that sector.

In order to reduce the cost of production in industries, the minister also proposed to cut the rate of tax at source on supply of raw materials to manufacturers from 7.0 per cent to 4.0 per cent.

Exemption of Advance Tax on importation of terephthalic acid and ethylene glycol, which are used as raw materials for manufacturing textile grade pet chips by registered manufacturers, is also proposed.

In a statement, the apex body of the frozen fish exporters, however, termed the 1.0 per cent source tax on the export of frozen fish and shrimp as illogical since the sector is struggling to survive.

It demanded to introduce 0.25 per cent source tax for the sector.