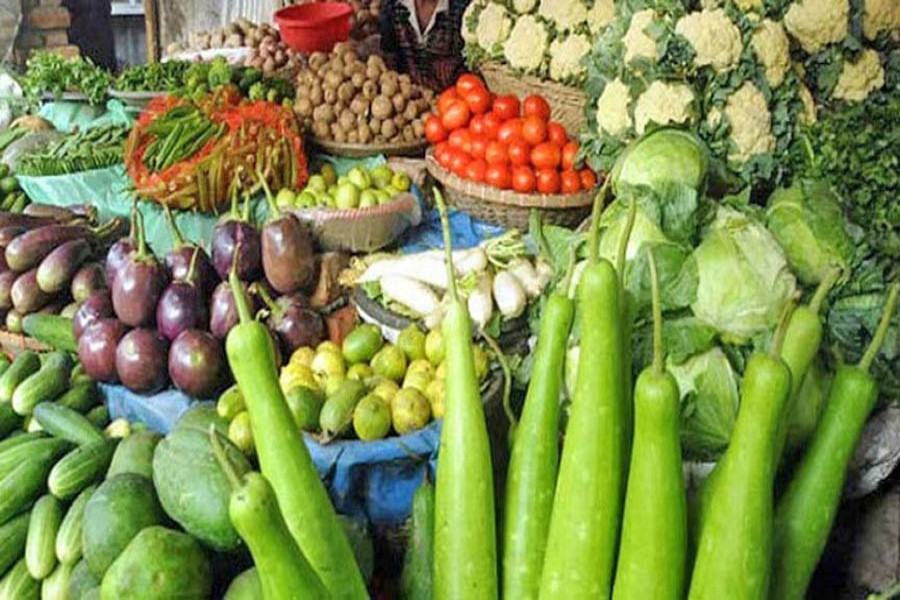 RAJSHAHI, Nov 26 (BSS): A target has been set to produce 2.06 million tonnes of vegetables from 89,666 hectares of land in the region including its vast Barind tract during the current winter season, officials said.

Department of Agricultural Extension (DAE) has set the target to produce various kinds of winter vegetables in all eight districts under Rajshahi division after the best uses of its existing natural resources and modern technologies, said Shamsul Wadud, Additional Director of DAE.

The advanced farming brings smiles on farmers' faces here as they are becoming financially solvent by cultivating various types of vegetables, meeting its rising demand with increasing population.

A resident of Hatibandha village under Godagari upazila, Ali has developed himself as a potential vegetable farmer in the region. He has cultivated cabbage on three bigha of land, papaya on one bigha and brinjal on three bighas of land.

"I have been selling cabbage at Taka 20-25 per piece and brinjal at Taka 80-90 per kilogram from my land directly for the last couple of weeks," Ali said, adding that the selling price has delighted him very much.

Sazzad Hossain, 35, a farmer at Darusha village under Paba upazila, said he earned Taka 28,000 after selling red amaranth from one bigha of land following sowing its seed hardly 25 days back at a cost of Taka 10,000.

He is very much happy with vegetable farming because he gets good yield with a fair market price within a short time.

Ali Hossai, 48, another farmer of Bilnepalpara village, said not only red amaranth but also many other short duration vegetables are being produced here.

Golam Mourtoza, 45, a farmer of Kakonhat village under Godagari upazila, has become an icon of vegetable cultivation at his locality. His annual earnings are around Taka 0.5 million on an average at present.

He has started vegetable farming with brinjal on only five decimals of fallow land after failing to get irrigation water for Irri-boro farming around five years back. His initial income was around Taka 15,000 that inspired him to expand vegetables farming commercially.

Mourtoza said farmers in the region are very much happy as they avail the scopes of recouping the losses caused by the adverse impacts of Covid-19 and devastating flood through getting the lucrative high price of early varieties of vegetables.

He added that the farmers get benefit by farming vegetables in the region including its vast Barind Tract. It brings a smile on marginal farmers and poor people's faces, he added.

Besides, he said vegetable farming on both commercial and non-commercial basis is gradually increasing in the vast Barind tract as many people are seen humming towards the farming leaving behind the high-irrigation consuming crops.

Both acreage and production of various types of vegetables increased significantly in the area during the last couple of years, sources said.

Under the 'Integrated Water Resource Management (IWRM)' project, more than 1.26 million community people of 0.27 million households are being motivated and encouraged towards vegetable farming to reduce the pressure on underground water.

The project is being implemented by DASCOH Foundation around 1,280 drought-hit villages in 39 Union Parishads and three municipalities of eight upazilas in Rajshahi, Naogaon and Chapainawabganj districts since 2014, said Jahangir Alam Khan, Coordinator of the project.

Sub-assistant Agriculture Officer Atanu Sarker said that the vegetable farming in Barind land is now plentiful. Farmers are seen sending their fresh vegetables to different cities including the capital Dhaka after meeting the local demands regularly, he added.

Acreage of the vegetables is increasing gradually due to more income from small land, he also said.