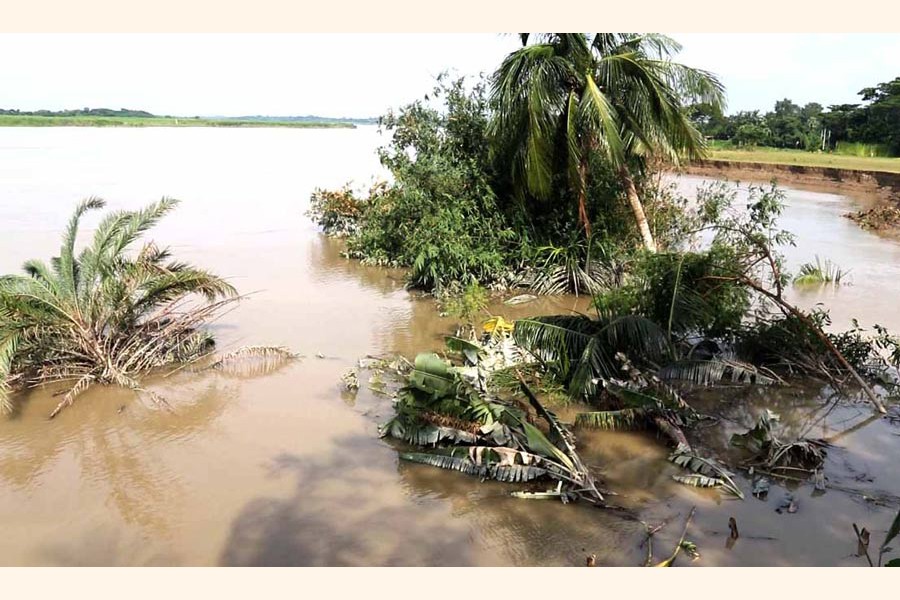 Erosion by the Modhumati eroded a vast tract of cropland at Chardhaitala village under Gopalganj Sadar upazila. The photo was taken on Wednesday — FE Photo

GOPALGANJ, Sept 11: Erosion by the Modhumati river has taken a serious turn at Charghaga to Chardhalaitala under Gopalganj Sadar.

The erosion has affected seven villages of the upazila. More than 60 families have become homeless. The river has already engulfed a vast tract of cropland, roads and different establishments.

Many people, who lost their dwellings, have taken shelter on the embankment or other places.

Ali Hossain (60) of Charghaga village under Sadar upazila in the district said he lost his ancestral home because of the erosion. He said he is living at his relative's house.

Sheikh Lutfar Rahman Bachchu, Sadar upazila chairman, said geo bags filled with sand have been placed on the bank of the river.

Bishwajhit Baddya, executive engineer of Gopalganj Water Development Board, said, "We are taking a new project to permanently check the erosion. High officials of the district administration have already visited the affected areas."