They want recognition as agricultural labourers 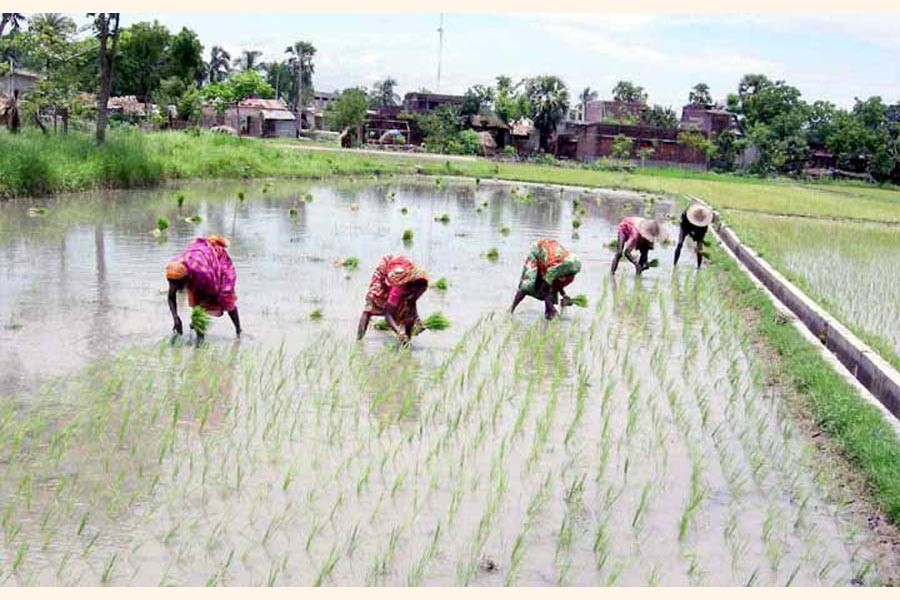 Indigenous women are playing a pioneering role in agriculture in addition to their household chores in the Barind region but they are facing wages discrimination in Bogura and Rajshahi districts.

Our Bogura Correspondent says: Indigenous women are playing a vital role in agriculture in addition to their household work.

The indigenous women are working as agricultural labourers on others' land to support family along with their husbands' income, said indigenous village leader Ashiny Gopal. Although these women do the same work as their male counterparts do, they are discriminated in payment severely. 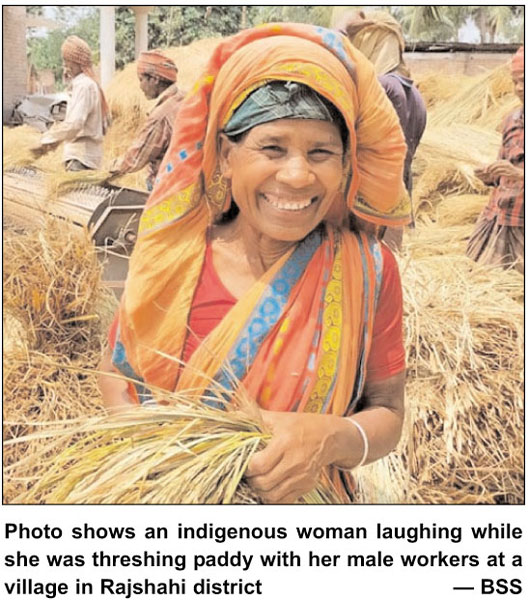 Vobany Rani, a female worker from the Gopalpur area under Nandigram upazila said they have been doing agricultural work for generations. Agriculture has been their main occupation for ages. She also said although they contribute to the development of agriculture and do good work, they are paid less than men.

The indigenous women are seen weeding, cutting and threshing rice equally with their male counterparts. However, an indigenous male worker gets Tk 500 to 700 whereas a woman worker gets Tk 300 to Tk 350 per day.

Amrito Lal Shaha, president of the former district branch of the National Tribal Council, said, "More than 42,000 tribal female workers are involved in agricultural work in the district."

He also saidethnic women in different areas including the Barind region work on an equal footing with male workers, but are constantly discriminated in terms of wages.

He demanded recognition of indigenous women as agricultural labourers and ensure fair wages.

BSS reports from Rajshahi: Women of indigenous group are contributing significantly in boosting the agricultural production in Rajshahi region, particularly in the vast Barind tract.

Since time immemorial, they are engaged in all forms of farming activities, including seedlings transplantation, weeding, harvesting, threshing and drying, side by side with the males round the year.

Only in Godagari and Tanore Upazilas of Rajshahi district, around 12,000 ethnic minority females are engaged in the farming activities for their livelihood, said Sushmita Tudu, a leader of ethnic minority women, adding the female labourers have brought an epoch-making success to the agriculture sector.

Although females perform identical work like males in farming fields, the female agricultural workers especially coming from the ethnic groups are still facing wage disparity in the region, particularly in the vast Barind tract for a long time.

She said time has come to recognise the ethnic minority women farm workers as agricultural labourers to protect them from wage disparity.

Conventionally, most of the ethnic female members work in agricultural fields for sapling transplantation, weeding and harvesting side by side with their male members.

Bharoty Rani, a farm-labourer of Raighati village under Mohanpur Upazila, alleged that many NGOs are working here in the name of ensuring legitimate rights to the ethnic women but none of them has taken initiative to remove the wage disparity.

The women labourers work almost throughout the day without having any urinary and toilet facilities, she added.

Maya Rani, another farm-labourer of the Jamtala area under the same upazila, said the employers give Tk 300 to 350 as daily wage while her male co-labourers get Taka 500 for the similar work.

She mentioned that the malpractice has been going on for a long time and none has headache in this regard. Normally, the female workers don't protest against the wage disparity due to various reasons.

"Though the female workers are more honest to work than the male workers, they get less wage as they are most vulnerable in the present social context", she added.

"Fortunately, the female workers are more experienced and efficient in work than that of their male counterparts. They also manage their households and nurse their offspring," said Jahangir Alam Khan, Coordinator of Integrated Water Resource Management (IWRM) Project.

He said a large number of women in the region work in crop fields as day labourers. But all of them are given lower wages than their male counterparts.

Around 0.1 million (one lakh) ethnic people live in the Barind area comprising the districts of Rajshahi, Naogaon and Chapainawabganj.

More than 95 per cent of them irrespective of male and female are involved in agricultural works. Around 45,000 of them sell their labours to others' fields almost round the year.

He also said the female workers are more efficient in seedling transplantation and its weeding and nursing.

Besides, they show equal competence in weeding and paddy harvesting, threshing and cleaning. Many of the land owners choose the female workers in farming activities as their wage is less to some extent than the male ones.

Raj Kumar Shaw, Executive Director of Anagrasar Samaj Unnayan Sangstha, alleged that if they claim equal wages like their male counterparts, the employers become reluctant to engage them in work for next time.

For this reason they are compelled to receive much lower wages. He said some female day labourers who are victims of discrimination are frequently seen narrating the stories of their frustration and deprivation at workplaces.

This desperate situation forces many ethnic women to sell their labour in advance for an even lower rate during the lean seasons, and they work for longer hours just to feed their families.