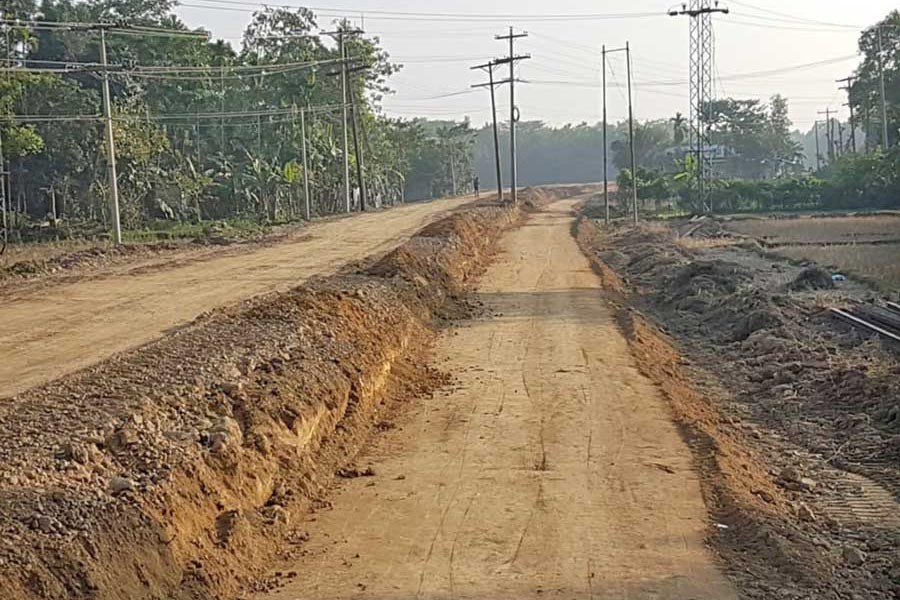 SYLHET, Jan 13: A six-month extension has been approved for completing the much-talked-about project for rehabilitating the Kulaura-Shahbajpur rail section in Moulvibazar district.

With this, the project works are to be completed by November 2020, but things are almost not possible as the progress still remained below 20 per cent, officials admitted.

However, the works got a little speed in recent months while the contracting firm's staff claiming they were trying for completing the job within the extended period.

Works began in May 2018 with a target to completing the job by May 2020. But seeing the progress at only 15 per cent in one and a half years since its start the authority agreed to a six-month extension recently.

A number of locals like Anwar Hossain of Kulaura town said it will be impossible to complete the works by November. The authority has wasted years just in starting the long-desired project. He said the dilly-dally trend of the contractors indicate their insincerity at the cost of locals' sufferings.

Trader Shamsuddin Ahmed of the Barlekha Bazar said, "We can't rely on the assurance since the railway authority as well as the Indian contractors had already missed several deadlines in the last few years. We have nothing to do but wait", he added.

Locals said a number of bridges and culverts had been demolished for reconstruction while the railway station buildings are to be constructed afresh as the total section remained abandoned for long years.

On the other hand, the new tracks on places are to be set newly after major land filling before laying rails at Kathaltoli, Shahbajpur and Dakshinbag.

Earth filling works would be completed in weeks, said an official as works were going on better in recent weeks. Stones and other construction materials had been brought to the sites, he said, adding, there has been a good progress in construction of the station yards of Dakshinbhag, Muraul and Shahbajpur stations.

An official at Bangladesh Railway (BR), however, said they expect to make a good progress during the dry season as it was very hard to setting rail track and other construction works during the monsoon in this region, prone to heavy rains.

Linked with Karimganj district of Assam, 52.54 km Kulaura-Shabajpur rail section was established during the British period. But the railway link with the Indian part remained suspended and went inoperative since mid-sixties.

However, the authority in a whimsical move shut the Kulaura-Shahbajpur section on July 07, 2007 on the plea of loss in revenue earnings. Alongside others, it had been a big blow for the inhabitants of Sylhet region, especially neighbouring upazilas like Juri, Barlekha, Kulaura and Beanibazar.

Following widespread agitation in the region, the government decided to resume the train service again. Accordingly the ECNEC approved the rehabilitation project on May 26, 2015 with a targeted expenditure of Tk 6.78 billion.

It includes Tk 1.22 billion from Bangladesh government and the rest Tk 5.56 billion from Indian Exim Bank credit. Accordingly the project was formally inaugurated during the Indian Prime Minister's visit to Bangladesh on June 06 that year.

The section has six railway stations-Kulaura, Juri, Dakshinbhag, Kathaltoli, Barlekha, Muraul and Shahbajpur. As many as 17 bridges, 42 small bridges and culverts would be constructed on the dual gauge section. Indian contracting firm 'Kalindi Rail Nirman' had been awarded the job while Balaji Rail Road systems', another Indian firm, had been made consultant.

They started works on May 07, 2018 while the Bangladesh and Indian Prime Ministers formally inaugurated the rehabilitation project through a video conference on September 10 the same year.

Although 60 per cent works were to be done by now, it is only 20 per cent, sources informed. The Indian High Commissioner to Bangladesh during her visit to the area on May 15 expressed her utter dissatisfaction over the progress of work.

Additional Chief Engineer of Bangladesh Railway, Tanvirul Islam, also the project Director, admitted the progress below 20 per cent. We are trying to expediting the whole project, he added.

However, an official of the Indian consultancy firm said things had been affected for reasons. Works would be strengthened soon and hopefully things would be done in time, the Project Director claimed.