He seeks help from all to become a doctor 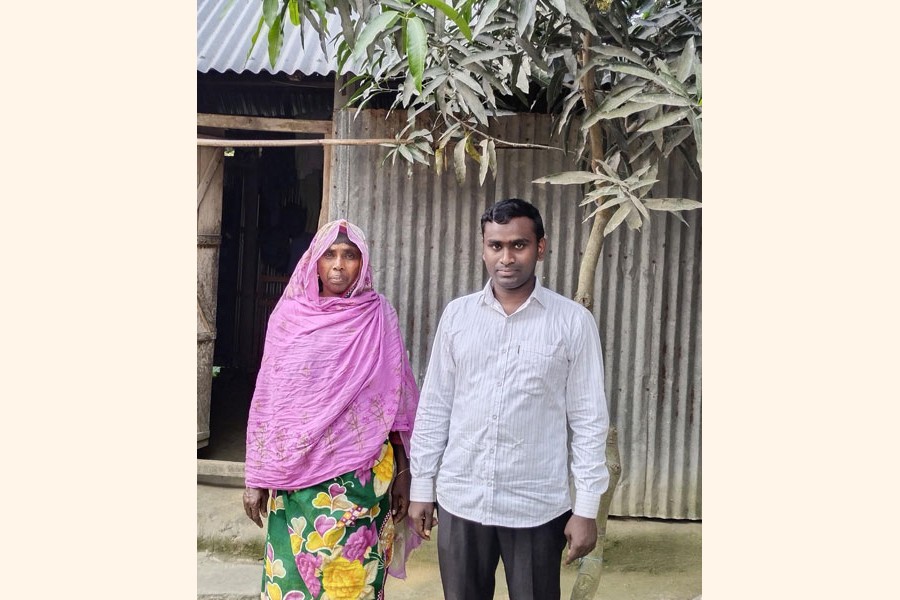 LALMONIRHAT, Apr 07: Mijanur Rahaman who is from a poor family of Char Khulaghat village of Khulaghat union under sadar upazilla of the district has got chance in MBBS this year. His family is residing beside flood protection dam near Dharla River.

Every year his homestead and surrounding areas gounder flood water. His father died when he was a student of class six. His father was a marginal peasant.After his father's death his mother fell in great difficulties with her six children.Mijan is the youngestamong thechildren. He was meritorious fromhis early childhood. But it was very much difficult for her mother to manage his educational expenses. But Mijan was determined to continue his study.

He passed the HSC examination from Lalmonirhat Government College with GPA-5 through hardship and struggle against poverty. He is acquaintedwith nutritiousfood and could not enjoy his childhood for extreme hardship. He is acquaintedonly with coarse rice and vegetables and one clothe.

His mother Zobeda Khatun said, "I could not feed my children properly with good one as I don't have the opportunity.He struggled a lot from his boyhood and continued his study taking help from others.

"I heard that a lot of money is needed for Medical education, I am very much worried about it how will I manage his admission fee and other expenses", a worried Zobeda Khatun said.

This year he got chance to study MBBS in Sher-E- Bangla Medical College but he doesn't know how he will manage his educational expense. He is worried about his future education. He passed SSC and HSC with GPA-5 from Char Khulaghat high school and Lalmonirhat Govt College. He earned his SSC and HSC exam fees and other expense through private tuition.

Visiting his village home it was found that there is no earning member in his family. His elder brother is working as a field worker with a local NGO in Sherpur district. An expatriate Dr. Abed Ali who lives in Australia gave him 1000 taka per month as stipend money during his class IX and X study period.But he managed his HSC education expenses by teaching other children in his area.

Minhaz Uddin, his school teacher told this correspondent that Mijan is a very polite and laborious boy but he is unlucky that he is born to a poor family. His mother is a housewife and she is unable to carry his medical college expenses.

Idris Ali, head teacher of his high school and also the chairman of Khulaghat union said that Mijan is a very intelligent boy but very poor. His father died when he was 10 years old. His father was a poor farmer and used to work in others land. I personally know him very well. I helped him different times from my part.I am very much happy that he got the chance for medical education which is a dream for many students. After passing HSC many students goe to the big city for coaching and other facilities but he could not enjoy this opportunity because of poverty. He urged to the well to do persons of the society to extend their helping hand for his education.