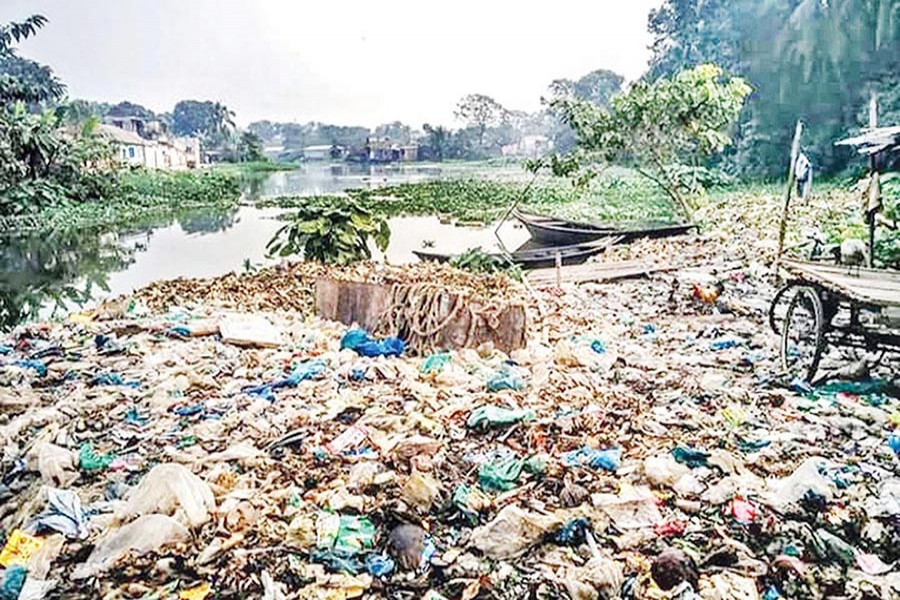 CUMILLA, Oct 09: Vast tracts of land along both the banks of the Gomti, one of the two predominant rivers of Cumilla, are under illegal occupation of grabbers, putting its existence at risk.

The district administration could not yet retrieve the river land from the possession of the encroachers, most of whom are influential locals, including politicians.

Local sources said over the past thirty years, more than 250 acres of land of the city lifeline has gone under illegal possession of the grabbers.

More than 800 encroachers have set up illegal structures, including business establishments, on the grabbed land of the river banks.

River water is being polluted by the wastes from the houses and businesses.

As a result, the old Gomati river is death throes because of illegal occupation on one hand and pollution on the other.

Markets in multi-storey buildings have been set up on the grabbed land of the river.

At present, a list of 722 people charged with grabbing the river land is in the hand of the local administration.

Sources said the local administration took steps to evict the illegal occupiers retrieving 258.74 acres of the grabbed land in January, 2014 but the process did not advance due to political and other reasons.

The Gomati enters Cumilla through Bibir Bazar border from the Indian state of Tripura. After the river's course changed, it took the name Old Gomati River stretching from Kaptan Bazaar to Shuvopur of the city.

The administration has issued notices eight to nine times to the illegal occupiers since 2003, but they could not take any effective steps as the grabbers are mostly politically influent.

During a recent visit, it was found that over 100 houses were built illegally in Shuvopur area on the north side near Chawkbazar and on the southeast up to Tikkarchar crematorium.

A factory has been built occupying a large area of the river near Shuvopur Bridge.

The district administration sources said Adarsha Sadar Upazila assistant commissioner (land) sent a letter to the additional deputy commissioner (revenue) on January 18, 2014 mentioning that 156.74 acres of arable land and 102 acres of non-arable khas land were grabbed, and that necessary steps must be taken to recover the lands.

A local named Zakir Hossen said he had applied for a holding number to the Cumilla City Corporation. Besides, he applied for gas connection long ago.

When asked how he built structures filling the river land, Zakir Hossain said he applied to the deputy commissioner's office and got lease of a two-decimal land on the riverbank.

President of Bangladesh Environment Movement (BAPA), Cumilla, Dr Mosleh Uddin Ahmed said an amusement park could be set up by freeing the occupied land of the river.

"We have already taken various programmes to protect the river. We've submitted memorandums to the deputy commissioner and city mayor in this regard. However, the administration is not taking any measures to check illegal occupation and pollution of the river," he added.

Local environmental activists observed that the old Gomati is the life of Cumilla city. Cumilla has many historical stories involving the river; so all demand that the river be freed from illegal occupation.

If the occupation process continues this way, the river is sure to lose its existence in near future.

"We have a list of the river grabbers. The administration will launch a drive against those who have illegally occupied the river banks. After the eviction of the illegal occupiers, we have a plan to give the river a new lease of life by increasing its aesthetic views," he added.