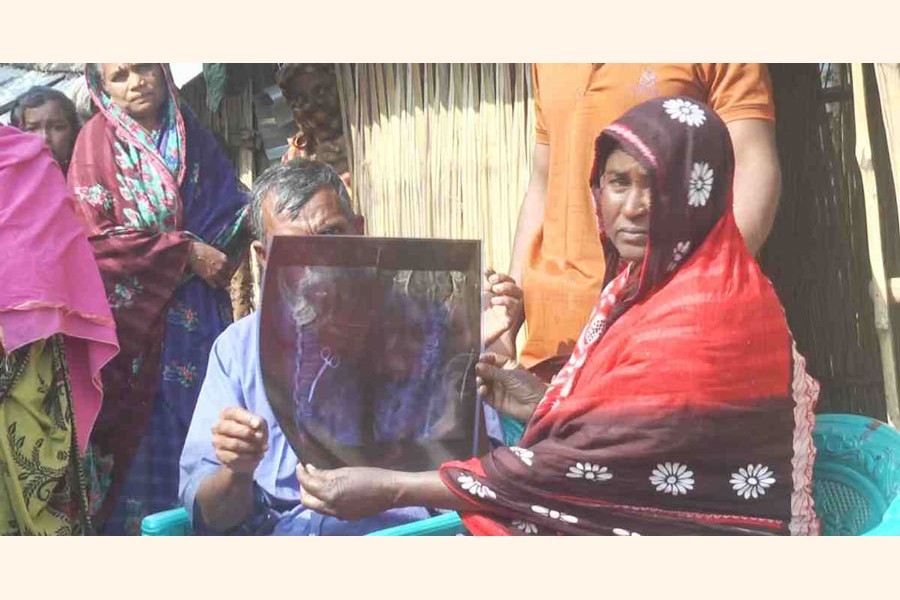 CHUADANGA, Jan 10 (UNB): Believe it or not, a surgical scissors was left inside the abdomen of a woman 20 years ago and it was just removed today (Monday) to relieve her pain.

Surgeons at Chuadanga Sadar Hospital remedied the medical mistake made when she underwent a gallbladder-stone surgery.

Bachena Khatun, now 55, from Alamdanga upazila had suffered from abdominal ache since her first surgery at a local clinic in 2002, said Dr Waliur Rahman Nayan, a senior consultant who supervised the second operation at the Sadar Hospital.

The gallstone operation was done by Dr Mizanur Rahman at Raza Clinic in Gangni upazila of Meherpur district, according to Bachena's family members, reports UNB.

He was assisted by Dr Parvez Hossain Raza, director at Raza Clinic, and Dr Tapash Kumar, an anaesthesiologist. After one week of the operation for which she spent her savings, Bachena was discharged from the clinic with a prescription.

In a few days she started feeling more pain in the abdomen and visited Dr Mizan with the complaint. The doctor dismissed her complaint as normal, asking her not to worry.

As the pain persisted, Bachena then went from one doctor to another and was prescribed more medicines, to no remission. In the process she had to sell two cows, her last assets, to pay for the treatment and medicines.

With the pain turning unbearable Bachena, advised by a doctor, finally underwent an x-ray that revealed presence of the surgical scissors.

Last week Bachnea was admitted to the Sadar Hospital where she was kept under pre-surgery operation because of her high diabetes.

Dr Waliur of Chuadanga Sadar Hospital says: "Bachena was under special care of the physicians as she was suffering from diabetes. The doctors conducted the surgery today (Monday) after bringing her sugar level under control and removed the surgical scissors at noon."

Bachena, meanwhile, complained that the authorities at errant Raza Clinic are not paying for her second surgery despite assurances.

Meherpur Civil Surgeon Dr Jawaherul Islam confirmed the matter, saying that a three-member committee has been formed to probe how the surgical scissors remained inside Bachena's abdomen.