Deluge comes down from Meghalaya hills 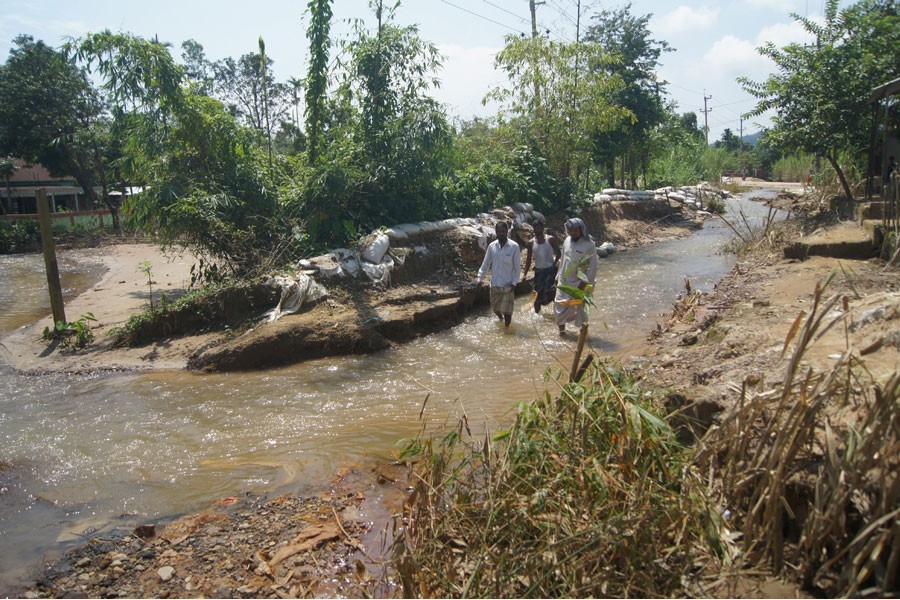 SYLHET, Sept 14: Anjana's dwelling house was washed away in just few hours as rolling waters and stones from upper-riparian deluged their frontier hamlet.

She is among members of about 20 families at only Noyachhora in Tahirpur upazila of Sunamganj upon whom the disaster came down from the neighbouring Meghalaya hills, sources said.

During a visit to the area last week, this correspondent saw some of these families struggling hard to protect and rebuild small homesteads.

Moreover, the road stretching to Tekerghat tourist spot and Barchhara Land Customs station was found buried under sand in many places. With huge ditches developed by rolling waters, one kilometre of the road is just abandoned after the damage. Even one cannot walk along it in the Noyachhara area.

Besides, at least 20 small ponds nearby were levelled by rolling sand as the playground of the Chandpur High school is covered with three-foot sand deposit.

Some 400 tonnes of stones and sand are kept nearby as the lawmen asked the locals not to collect and sell those without permission.

About a hundred families of neighbouring villages are in huge trouble as their homesteads and croplands have been lost to the sand rolling from the hills in recent years.

"Already, over a thousand hectares of paddy, wheat, vegetables etc have gone uncultivable being covered with two-to three-foot layers of sand," said many a local.

"Things were on a minimal scale, but it took a serious turn this year," said Bardal Union Parishad member Samrat Mia.

Green campaigner BELA's Regional Coordinator Shah Shaheda Akhtar said they had visited the habitats badly hit by the rolling stones and waters that damaged small dwellings of at least 20 poor families this time. "If measures were not taken immediately, the damage would be more extensive."

She adds: "Environmental loss needs to be assessed soon."

The scenic beauty of the area, which stands on the foothills of Meghalaya, attracts hundreds of visitors every day.

Abdul Khalique, teacher of a nearby madrasah, said, "Rolling sand and water from the hills during rain cause the disaster."

Contacted, Water Development Board (WDB) Chief Engineer, Sylhet circle, ASM Shahidul Islam said, "We are aware of the croplands being damaged by rolling sand from Meghalaya. But we are yet to take any step."

Central Finance Secretary of Bangladesh Adivasi Forum Andrew Solomer, also an inhabitant of the area, feels immediately the authority should think about measures, including digging the streams, which should be kept clear always.

"Otherwise, the situation would be critical with continued rolling of sand even on moderate rainfall."

Sunamganj's Deputy Commissioner, Jahangir Hossain, said, "We are aware of the locals' sufferings. Officials had visited the area and a 3-man committee with the WDB Executive Engineer had been asked to report about the damage and for suggesting measures.

"The locals had also been asked not to sell the rolling stones and sand. Decision would soon be taken to sell out those through bidding."