This is how women in Kurigram augment their households' income 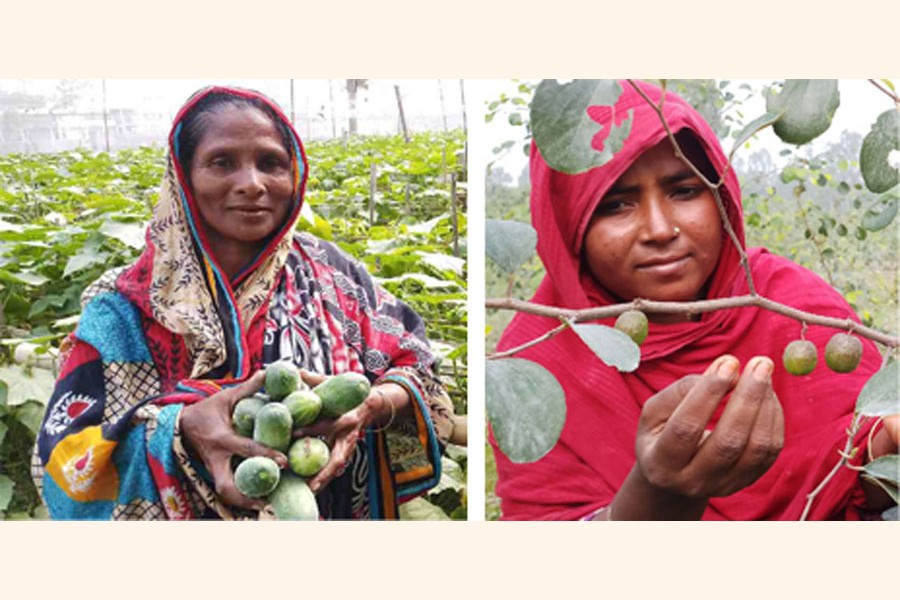 KURIGRAM, Jan 13 (UNB): Amina Begum of Sadar upazila's Shuvarkuti village had to take shelter in her father's home as her husband's house got destroyed by the flood. She managed some loans and planted 'apple kul', papaya, chilly and eggplants on 60 decimals of her father's land. This season she had to count a hefty loss for cultivating crops. Amina took up farming vegetables and fruits to recoup the loss and hopes to make enough to buy a piece of land to build her own home.

Kurigram farming families were facing huge losses caused by consecutive 5th phase of floods. To recover the loss male members have set out in search of work in different districts. Meanwhile, female members started alternative farming. Housewives of Kurigram are now becoming farmers to meet up the demand and alleviate poverty of their family.

On a recent spot visit to Kurigram sadar upazila's Holokhana union, in the village of Shuvarkuti, the news agaency correspondent witnessed the extensive farming activities of the females.

There, some have cultivated cucumber, some beans, some jujube, papaya and many other vegetables on lands that were damaged by the flood, but where the waters have receded. Amina's neighbour, Meghna Begum, sowed cucumber seeds on her land after flood water drained out in September. Within three months, her cucumbers became marketable. Cultivation of cucumber cost Meghna Tk 80,000, but she is expecting revenue from them to touch Tk 120,000 - allowing for a neat Tk 40,000 profit.

Golzar Hossain, member of Holokhana Union, Ward No 9 said: 'Times have changed. Women of the family are adept at farming in instalments. Having prepared the land for farming, males venture outside their villages in search of better-paying jobs, while the women of Kurigram take care of the instalment farming in their absence.'

Eti Begum of Shuvarkuti said her seedbeds and rice field were damaged three times during this year's five phases of flooding. She had to incur a loss of Tk 25,000. Availing the farming rehabilitation aid and digging into her own savings, Eti planted beans on 30 decimals of her land. She is hopeful that by selling the beans, she can recoup the overall loss of Tk 25,000 incurred so far.

The women in the region have received institutional support, be it technical expertise or microfinance, from Rangpur Dinajpur Rural Service (RDRS), an NGO active in the area since 1972. RDRS has also provided training to some 13,000 women who have received their farming rehabilitation aid packages ranging from Tk 2,000 to Tk 12,000. There are other microfinance institutions active in the region as well.

Not only the farmers of Shuvarkuti, flood affected Panchgachi, Jatrapur, Ulipur union's Bajra and Begamganj union farmers are also inclined to change their fates through alternative farming.