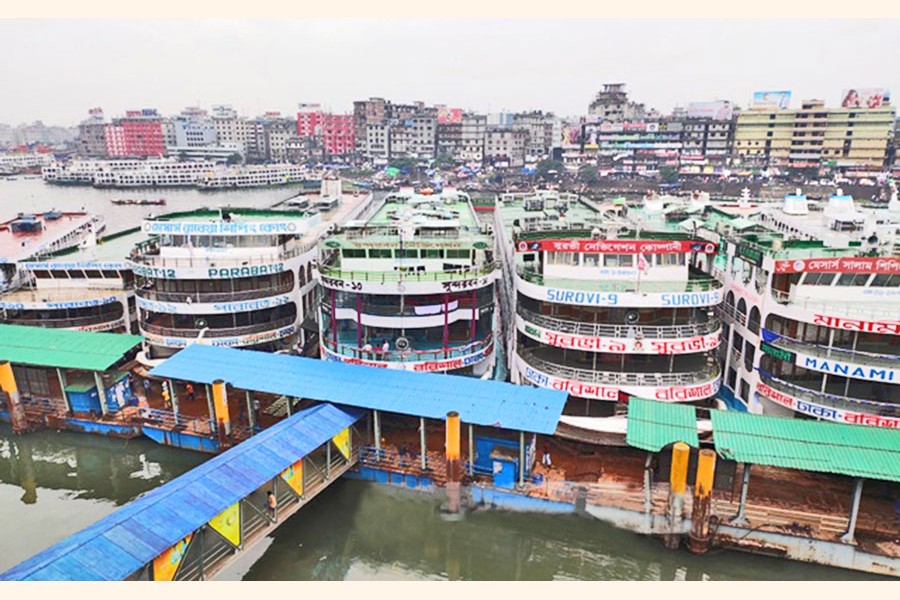 The Padma Bridge has created a frenzy of excitement among travellers, but there is uncertainty about how southern river routes will cope with the unknown future, reports bdnews24.com.

Of the 107 water routes across the country, 43 connect Dhaka's Sadarghat river port with the southern districts. About 200 launches currently operate on these routes.

Bangladesh is set to open the long-awaited Padma Bridge tomorrow (Saturday), connecting the disadvantaged south to the capital by road. It will save people travel time and curb perilous journeys during Eid.

But there are questions about whether the ferries and launches running the Mawa-Majhirkandi and Banglabazar routes will continue to operate after the bridge opens.

The Padma Bridge is the pride of the nation, and everyone is eagerly waiting to cross the bridge, he said. "People from other districts will come to see the bridge."

Though the road trips will give them a bit of trouble compared to the water route, people will likely cross the bridge to travel from Dhaka to their home villages just to cross the bridge for the first time, the state minister said.

But the ferry from Shimulia to Majhirkandi and the Banglabazar route will remain operational even after the bridge opens, he added. "The government will observe the situation for two months. What happens to the 87 launches on this route will become clear over time."

Launch owners, however, said that these launches can't sustain themselves if the buses start travelling over the bridge.

Tariqul Islam, the owner of the Tanni Tamim launch, does not believe it will be possible to keep launches running on the route.

However, it will resolve the "indescribable suffering" of the people, said Tariqul, who has been in the water transport business for over 20 years.

"People from 23 districts used to travel along this route, but no one will travel by launch with their luggage just to save a little money", Tariqul said.

"People will choose bus rides as they have suffered a lot, risking their lives in storms and rain while crossing on the river route," he said.

Rubel, the owner of the launch Ya Muktadir on the Shimulia route, said it costs him a total of Tk 100,000 per month, including staff pay and oil prices, to operate the launch.

"After the bridge opens, only about five to six launches will be able to run on this route", Rubel said.

Asked what will happen to the remaining launches, a BIWTA official said: "There are and will be many more new water routes. Those launches will be transferred to the new routes."

"Balashi and Bahadurabad have reopened and there will be more new routes. Patuakhali also has new river ports," he said.

Although the Padma Bridge has opened a new horizon of road connectivity, it will not have much impact on the launch passengers travelling from Sadarghat to Barishal, Patuakhali, Jhalakathi, Pirojpur, Bhola, Shariatpur and Madaripur, according to industry insiders.

The number of river routes in these districts, including Chandpur, is 43. According to the BIWTA Transport wing, 24 launches run daily on the Dhaka-Barishal route.

Six launches of the Sundarban Group are operating on the Dhaka-Barishal route and two more new launches are being added, said Abul Kalam Jhantu, general manager of the company.

Asked if the launches plying the southern routes would get enough passengers, he said: "If there was a problem, I would not have decided to launch Sundarban-15 and Sundarban-16."

Launch and bus passengers are different and those who are comfortable travelling by launch will not travel by bus, Abul Kalam said.

Asked if he would travel by launch after the inauguration of the Padma Bridge, a middle-aged passenger sitting on the deck of the Sundarban launch headed to Barishal from Dhaka said it was hard to say at the moment. However, the bus will take less time and the fare isn't too much higher.