Being in the domain of new normal

It doesn't take long for a society to get attuned to the new normal. Take the case of Bangladesh and the other developing countries - and also the developed bloc. All of them share a common feature. They have been hit by the dreadful novel coronavirus. 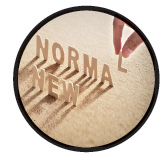 In spite of this, some of the latter have proved themselves different. They now appear to be in the convalescent phase, and have begun resorting to tentative openings to social and community activities. Many poorer nations are far from these developments.

Notwithstanding this difference between the two groups of countries, a common feature that distinguishes them has lately come up as their adaptability to the trends of the new normal. On being hit by the corona pandemic, or Covid-19, the global scenario has undergone a rapid transformation. Many social customs, politics, trade and economy may, in most probability, will not be the same. With many weirdly new trends in behaviour and thoughts slowly taking root in societies, the March-June period of 2020 has witnessed a noticeable break with the past.

The world has passed through such transformations after great wars, especially the First and Second World Wars, cataclysmic natural events, other global pandemics and regional upheavals. They too, have, served as catalysts for lots of newer changes. In a general view, their impacts were acutely felt in the politico-economic sectors. Society and everyday life in general remained unscathed by the earlier disasters. Even during the centuries-long European Black Death, dominated by the contagious bubonic plague, small pox, flu etc, health experts could not think of the present corona-time physical or social distancing.

This pandemic-control step, seemingly extreme and selfish, has emerged as the most dominant of the Covid-19 imperatives. It has been in enforcement worldwide since the pandemic began demonstrating its fury. With the general people being unaware, this 'distancing' requirement has hit the top place of the new-normal components. The phenomenon has presumably started at popular Australian beaches during 'lockdowns'. At present it covers all spheres of life - beginning from marketplaces, restaurants, conferences, all modes of transport, and, even, walkways.

The panic caused by infection from physical proximity has reached such a level that video or virtual conferences are now the order of the day. Given the changed style of conferences and discussions now in vogue, the traditional gathering of experts might eventually become a thing of the past. There are many benefits of virtual meetings. They save the money and hassles of people organising the talks. Due to their being at home, the participants remain free of the fear of being infected by an asymptomatic person.

Doing office online has also found a place on the list of the functions comprising the corona-time new normal reality. A few globally functioning office networks have lately announced their plan to encourage their staff to continue work online from home. They estimate it will drastically cut down their expenditure in running offices. Amazingly, running workplaces online is expected to continue for an indefinite period. In order to confront the post-pandemic recession, scores of other enterprises are expected to join the trend.

The new normal has crept into today's so-called modern life with health activists discouraging handshake and hugging. In Bangladesh, and the other South Asian countries, most of the people have felt embarrassed over some restrictions. Guests nowadays are not welcomed to one's home. Ironically, the general people continue to evade the rules of moderate lockdowns.

Earlier, the now-lifted shutdowns witnessed veritably normal movements of people on foot. Although shopping centres remained closed, neighbourhood kitchen markets had no dearth of people. What had emerged as new normal were the ever-mushrooming vendors in the city's lanes and by-lanes. They would sell everything needed in cooking - from vegetables, fishes, live chickens, eggs, spices to seasonal fruits. The manually pushed improvised vans of vendors now dominate the scene. In course of time, they are set to become a part of Dhaka's urban life.

The hordes of apparently destitute people moving around the residential areas have also become a feature of Dhaka's neo-normal reality. Coming out of their shanty dwellings after dusk, they chiefly seek alms. During daytime, other groups of similar people roam the streets calling for help. The capital had never been used to these types of scenarios. With the corona pandemic still on its dreadful march, Dhaka continues to pass into the phase of its neo-normal entity.

Features one after another are being unveiled in the capital. A highly noticeable one is the absence of people who would throng its main flower centre at Shahbag. The flower shops remain mostly closed. With the wedding receptions, different ceremonial functions and flower-centred rites and rituals virtually not taking place in conformity with physical distance maintenance; flowers are no longer a part of Dhaka life. It is, undoubtedly, a proof of the city's new-normal transformation.

The most striking part of the country's present new-normal state appears to be its education sector. Its educational institutions have been declared closed since March-end on the ground of ensuring physical distance. The unpredictability of the pandemic's duration makes it almost impossible for the authorities to fix a date to reopen the institutions. Meanwhile, haphazardly conducted online classes benefit the students of only a handful of exclusive institutions. With the ups and downs in the Covid-19 intensity, the country's education sector is set to pass through a series of traumatic times. This and many everyday social sectors seem to be poised to become the potent segments of the country's new normal.

People with families have started leaving the cities to start a pandemic-free life in villages - but in reality they are spreading the virus. It's a terrible development. One day it might be socially accepted as new normal. Choices are open. Many people may feel compelled to opt for the new normal. It will expedite the pandemic's peaking point, finally ending in herd immunity.