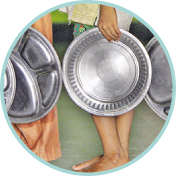 It is mind-boggling to think that one person is dying of hunger every four seconds in this world of advanced science and technology. In terms of number, on an average 19,700 human beings succumb to starvation every day. Belying the United Nations' optimism and pledge that no person will be allowed to die for want of food in the 21st century, the number of deaths is an abysmal affront to the civilisation poised to embark on its fourth industrial revolution (4IR). No wonder that 238 NGOs of the world in an open letter to the world leaders gathering in New York for the United Nations General Assembly have tried to draw the latter's attention to this manmade hunger for immediate action. In their statement they mentioned, "A staggering 345 million people are now experiencing acute hunger, a number that has more than doubled since 2019."

Now contrast this with such news as 573 people became new billionaires --- one every 30 hours during the critical period of the pandemic. Add to this, the 5.2 million millionaires who joined their category of the rich worldwide. Again, 10 richest people in the world doubled their net worth during the Covid crisis. Earlier, the charitable organisation Oxfam put it succinctly on the eve of the World Economic Forum conference at Davos, Switzerland thus, "We've seen this explosion in billionaire wealth during the pandemic, and now on the back of food and energy price increases. And you're seeing this historic rise in poverty worldwide, which we also haven't seen for decades".

How the Oxfam analyses this is even more important. It is categorical that the superrich could outrageously accumulate their wealth largely because of tax-payers' money. How? It is because rich countries ---not to mention countries like Bangladesh ---poured trillions of dollars into their economies in response to Covid-19. That indeed drove up the asset prices. The fortunes of the food and energy billionaires now getting amassed as profits in those sectors are soaring on the back of galloping prices.

This has not been any different in Bangladesh where the real beneficiaries of the injection of money in the form of stimulus packages have been the country's rich and superrich. Against the creation of one billionaire every 30 hours, 263 million more people will slide into extreme poverty worldwide in 2022. As many as 50 million people in 45 countries are on the brink of starvation by this time. What will be the number of Bangladesh people hurtling into that level of misery this year? In the context of high inflation, a record number of people may fall victim to such abject poverty.

What makes the world so unjust, uncaring and mindless even during and after the worst pandemic in human history? In fact, the problem lies with the system of wealth creation and its distribution. Profit-sharing is based on a most unfair and irrational conception ---a legacy of the free market economy. Investors and entrepreneurs along with the business sharks have developed a highly exploitative system in which working force is left outrageously deprived of their reasonable dues. All this is because owners of factories and industries and corporate businesses are always after capital gains for expansion of their business empires, sparing hardly any thought of all-round welfare of the workers and their families. Of course, they are smart enough to pamper the brains behind business in such a way that the latter soon become a tool for the intriguing act of exploitation.

The filthy rich who should have been scoffed at for not sharing their unethically amassed fortunes are in fact looked at with awe, if not revered, in the present system of economic order. Superrich like Warren Buffet and Bill Gates have initiated a move to reach out to the needy with staggering allocation of funds. But the poverty, depravity and needs are far more abysmal than can the charity of a few top billionaires of the world address. Also these are isolated efforts to lessen the sufferings of the teeming millions. Better it would have been had there been a concerted and collaborative venture mooted by the world's rich and superrich to share a portion of their huge fortunes with the poor wallowing in misery. Sure enough, their contribution to an internationally pooled fund would not have bled them at all but could eliminate starvation and living woes of every person on this planet once for all.

Equally important, beside one-time support for building a decent shelter and livelihood, is to ensure sustainability of living standard by means of a permanent source of income for all. This is quite possible ---and was most desirable at the time of the pandemic and the post-pandemic period of economies' turnaround---if public-private collaboration is upped to wage a war against poverty and hunger. Instead of going for any such socio-economic welfare programme, states and corporate businesses are out to take undue advantage of supply crunch of energy and foods in order to maximise their profits. It is in the world leaders' and policymakers' power to bring an end to poverty and hunger the world over but there is no sign they are serious enough to respond to the crisis the humanity is facing now.