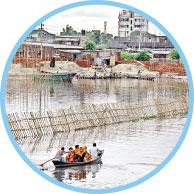 Rivers are believed to be one of the most susceptible victims of public neglect and onslaught in this country-especially those flowing close to, or around townships, business centres and urban habitats. This is an age-old narrative of utter lawlessness and anarchy, to say the least--- fuelled by greed, and more than anything, failure of the authorities to rein in the influence of the powerful quarters or individuals who find rivers and river banks a potentially gainful spoilsport. While river grabbing --- perfectly dubbed after the greed for lands on river banks --- has been going on undeterred for decades, lack of navigability of most rivers has become a cause of utter public misery. Occasional drives by the concerned state body, the Bangladesh Inland Water Transport Authority (BIWTA) to rescue lands from the grabbers have not proved enough to convince the citizens that they are earnest in their task. On the other hand, there has always been an element of cynicism, too, regarding the government's position in remaining firm and steady to bring things in order.

We have seen many drives in the past, mostly ill-organised, hence rendered ineffective and fruitless. However, the initiative taken by the BIWTA in 2019 deserves credit in that it was far better coordinated, well organised, and as public perception goes, backed strongly by political will. The drive to evict unauthorised installations did succeed considerably, mainly on the banks of the major rivers around the capital including the Buriganga, the Turag and the Shitalakhya. Well built structures, including multistoried ones, warehouses, even factories were demolished and the lands reclaimed. True, some partisan groups managed to stay safe and unhurt under various pretexts including court verdict in their favour. However, the way the drive was gaining momentum with overwhelming public support, one had the feeling that those unscathed would soon experience the same fate of the others. Unfortunately, the drive, the strongest ever, did not continue long enough. Fund, reportedly, was one key constraint.

What was important to do following whatever eviction work was done at that time was to draw the demarcation lines on the foreshores of the rivers in order to stop farther encroachment. The work started after a while under a project to install demarcation pillars, set up bank protection devices, walkways and other allied development works on the banks of the Buriganga, the Turag, the Balu and the Sitalakhya--- the four rivers encircling the capital city all of which are subjected to all kinds of abuse. The project work slowed due to the pandemic, and now due to time and cost over-run, the BIWTA has reportedly sought more funds from the government to complete the project by 2024. In its revised proposal the BIWTA has incorporated new components including construction of 35.35 kilometres of drain along the walkways, and changes in the rate schedule as the major reasons for seeking the revision. Erection of 3,850 boundary pillars, construction of 17.75 kilometres of walkway and removal of 18.21 cubic-metres of earth and establishment of four stations and 14 jetties for riverine transports are the major components of the project.

According to observers and experts, identifying the demarcation lines is fraught with some difficulties as there exists an element of indistinctness in some places as to the exact points on which to erect the demarcation pillars. It may be noted in this regard that way back in 2009 the High Court issued a directive to the government to draw demarcation lines in accordance with the Cadastral Survey and revised survey records, retaining the eroded areas. Although no work in this regard had been done despite the HC directive, experts feel doing it now in line with the directive would do away with all confusions. There are, however, reports in newspapers quoting a study report released in January 2021 by the River and Delta Research Centre that said that the BIWTA had set up 1,423 river demarcation pillars on wrong locations. The authorities need to look into the matter urgently to avoid any controversy in this regard.

While setting up the demarcation pillars appropriately is a crucial task following the reclamation of lands over months of hard work by the BIWTA and the law enforcers, there is a lot to be achieved in terms of recovery of the lands from illegal occupants. Since there was no concerted effort for decades in this regard, it is indeed tough to keep doing both the jobs at a time--- reclamation and installation of a large number of demarcation pillars. Given however the daunting nature of the job, one feels that both works must go on simultaneously for accomplishing a great job--- hopefully once and for all.

There is more to the subject. Navigability in some of the aforementioned rivers is seriously at stake. Due to earth filling by grabbers, some of the vital river channels are no longer in existence which must be restored to their original state. Besides, improving overall navigability, particularly in the lean season, is extremely important. It may be noted that because of lack of navigability, the much drummed up water bus service could not succeed. There are of course other reasons for the faltering of the water bus service, but had navigability been up to the satisfactory level, things might not have turned this bad.

The government is likely to give its nod to the revised project after examination. The rest will depend on the BIWTA to organise its activities in a resolute and concerted manner for the sake of public good and the environment.