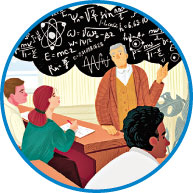 Science matters. With COP-27 drawing to a close in Sharm el-Sheikh, the need to have the planet pulled back from the brink assumes greater importance than ever before. If on the one hand science, in the form of unbridled industrialization has brought Earth to this pass, on the other it is the efforts we can put in our use of scientific means to stop further damage to the planet.

In Bangladesh, where the threat of the fallout of climate change is all too real, it is the study of science in all its historical evolution we need our young people to master. Let that education in science, as distinct from the general run of subjects in school and college syllabi, be the focus in our educational institutions all over the country.

Studies of science, given such priorities in recent times as the stress on organic food, solar energy, high-yielding crop varieties and the like, call for a wholesale redefinition in schools and colleges. Indeed, it is at the very primary level that these studies should be initiated, with little children taught about the varied nature of the planet, covering such aspects as rain forests, alluvial soil and deserts giving Earth its diversity.

Why a seed sprouts into a plant in Bangladesh but will not do so in the Sahara is a lesson which can be initiated in the very young.

And from there studies of science can be expanded to include wider areas of the exploration of not just the planet but also the vast expanses of space out there. Now that Artemis-1 has finally lifted off and gone off on its orbits around the moon, the goal being a return by man to the lunar surface for the first time since the 1970s, it is important that our children and grandchildren in school be suitably instructed in science as it has developed over the decades.

Yet there is more we need to argue for science. In Bangladesh we are in huge need of scientific knowledge defining broad society. In newspapers, on radio and television, programmes on science --- relating to developments in medicine, space technology, artificial intelligence, et cetera --- need to be accorded importance through regular deliberations on its diverse aspects.

Which calls to mind the excellent contributions made some decades ago to a popularization of science by the late Abdullah al-Muti Sharfuddin. He explained the nature of science, in fact its minute details, in comprehensible layman's language. It is a revival of such presentations of the significance of science, conducted by experts in the area, we are in need of today.

The media owe it to themselves to develop their science departments through appointing full-fledged staff led by science reporters to keep abreast of scientific developments worldwide.

The paucity of scientific knowledge or our inability to keep pace with scientific progress can, therefore, be handled by the media. At another level, and that is basically through classroom teaching, the young could be enlightened on the history of science and the contributions made to scientific discovery and innovation by individuals down the centuries.

Among these individuals are those who have become part of history in our region. But to what extent we have been able to disseminate their thoughts and achievements to the young, indeed to the larger nation, is a question which troubles us immensely.

The contributions of our very own Jamal Nazrul Islam, a brilliant scientist by any stretch of the meaning, remain largely unknown. His education abroad and his efforts to translate his thoughts into reality at home should be spoken of before the young.

In similar fashion, the remarkable life of Dwijen Sharma ought to be a subject of focused discussion in our schools and colleges. That Sharma has not been presented sufficiently well to the young risks his contributions being forgotten. And being forgetful of science or history spells danger for the world as we inhabit it in these present times. The purpose of science, of studies of it, is to lift people to a state where they can better comprehend the mystery of life and all that it entails.

Which is again a reminder for us of our need to go back, for our children, to the world inhabited by Jagadish Chandra Bose. Beyond our geographical frontiers, Carl Sagan waits to be dwelt on. His explanations of the nature of the universe, like al-Muti Sharfuddin's, educated people about space science in a way we were not privy to earlier.

Sagan's work Cosmos as also his examination and interpretations of science should form part of scientific research and conversation essentially in educational institutions in Bangladesh's rural interior.

Science expands the human imagination in the way literature opens the window to aesthetic explorations of life in the mind. Science offers explanations of the nature of life on Earth as also inquiries into the presence or otherwise of life forms beyond Earth.

Let it not be forgotten that science is always an ongoing process of exploration and discovery which does not seek to emphasise an absolute truth.

It is a journey in search of that absolute truth and along the way it comes across nuggets of reality which together are gathered into a pile as proof of what has been and what will likely be.

Go back to Artemis-1. With the Voyager spacecraft, the Hubble Telescope and the James Webb Space Telescope already deep inside a consistently expanding universe, our young, through demonstrations by their teachers and science exponents, need to be brought level with the progress science has been making in outer space.

Included in that discussion should be the history of space exploration, of the foray into space by Soviet cosmonauts and American astronauts, of the race to reach the moon, of the tales of the twelve men who walked on the moon.

And then comes the need for studies of space-related disasters or near disasters, notably the failure of Apollo-13 to reach the moon and the death of astronauts aboard the Challenger spacecraft as it exploded moments into take-off on a January day.

Finally, the overriding purpose of science education in Bangladesh should be to encourage the young to go for discoveries and inventions in the context of the country's needs.

When the University Grants Commission informs us that a mere 11 per cent of students at the university level go for science, the dilemma is self-explanatory.

In learning of agricultural production, in exploring the means of tackling climate change, in innovations in medicine and engineering, the young will push the country forward.

Science is an endless journey in the pursuit of knowledge. Let our young embark on this journey.