The priorities . . . when the waters recede 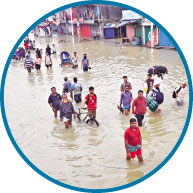 It is all depressing mathematics we have before us. With 94 per cent of Sunamganj under water, with more than 84 per cent of Sylhet submerged, the message comes loud and clear. It is that in the days and weeks ahead, a reworking of national priorities will be the biggest requirement before the country.

Top of those priorities will be a focus on austerity where spending, in terms of resources, is concerned. In other words, with the floods having wrought devastation of this kind, the entire focus of the administration must be on lifting the people affected and the battered economy on to dry land, literally and metaphorically speaking.

Let us turn back to the mathematics. No fewer than 4.3 million people have been badly affected by the floodwaters; 56,000 hectares of paddy lie ruined; 40,000 hectares of land given over to vegetables, fruits and oilseeds have gone under water. The mathematics comes from nearly every corner, not least from the UN Office for the Coordination of Humanitarian Affairs (UN-OCHA).

There are all the other regions of the country --- Kurigram, Jamalpur, Gaibandha, Rangpur, Lalmonirhat, Nilphamari, Bogra and Sirajganj --- which the floods have left reeling. All the major rivers --- Dudhkumar, Dharla, Ghagor, Brahmaputra, Jamuna, Teesta --- are in spate. Things will therefore get worse before they get any better. The observations of the Prime Minister only add to the grim nature of the tragedy. She informs the country that 74,000 hectares of land have slipped under the floodwaters, that as many as 40,000 ponds and hatcheries have been badly damaged.

The question of whether or not the floods, following so soon after flash floods in May, could have been predicted and so safety measures could have been taken is irrelevant. The sheer violence of the weather --- the incessant rains and the increasingly riotous rivers --- is a clear new affirmation of the truth of how climate change is beginning to take a toll on all of us here in Bangladesh. When electricity needs to be snapped by the administration and gas supplies call for suspension and telecommunications as also road, train and air links screech to a halt, the enormity of the problem cannot be looked away from.

Which is when we revert to thoughts of the priorities that should be laid out by the government. The economy calls for a tightening of the belt, which in essence means that policy makers must now take stock of the food situation in the country. The thousands of hectares of crops ruined in the floods makes it imperative for the government to reassure people that food stocks elsewhere in the country are safe and secure and that distribution will be properly streamlined, especially in the case of those who have been living precariously on the waters.

When the waters recede, a devastated landscape will reveal itself, which is when a rebuilding of life in the regions now under water will acquire urgency. Seeds must be distributed, for new crops to grow out of the empty vastness staring us in the face. The terrible reality is there, which is that farmers are up against desolation because they have no crops to sell or perhaps even to live on. As for those who have generally conducted life as peasants working the fields of the affluent, things promise to be much worse.

And then let us not forget that from these dark waters will arise diseases of a multiple nature. The Prime Minister has spoken of 300 medical teams already at work in the flooded regions. That figure will certainly need to be augmented. A crisis of the kind we face leads to diarrhea and dysentery and cholera and various other assaults on the human body. It will be a hard task handling the problem, given that health centres at the district, upazila and union levels have been rendered as good as non-existent by the floods.

Everything will therefore need to be rebuilt from scratch. Teams of doctors and nurses armed with a profusion of medicines, to be supplied freely to people by the state, will go a long way toward holding back any new threat arising out of the floods. The government's food stocks apart, this is a time when philanthropy is a huge requirement. NGOs and other organisations, which have historically come to the aid of people in distress, will of course do their work. But it must also become the responsibility of industrial houses to plunge into the task of post-flood rehabilitation. There are millionaires and billionaires in the country, people who must fulfill their social responsibilities. Every natural disaster is a destruction of everything that must be followed by a new beginning of everything. Think of the livestock that has been lost, of the cattle left in a poor state of health by the floodwaters. The poor who have lost a goat or cow or fowl are in need of reassurance --- that the state, which so admirably came forth with financial packages for people to handle the coronavirus, will now step up to prevent the disadvantaged from sinking into deeper poverty brought on by the floods.

Reconstruction of the battered regions, indeed of the national economy as a whole, has been made a necessity by the sheer scale of the floods. A pooling of resources toward a return of normalcy entails a strict control over prices, absolute vigilance over the activities of unscrupulous businessmen and traders waiting beyond the floodwaters to trade in human misery.

In a society where prices of food take a quantum leap during Ramadan, where ingredients needed for cooking are hoarded, to be released in exchange for scandalous prices, the morally corrupt keep fine-tuning the art of thievery. Therefore it is important that strictness be applied, that timorousness in applying harsh measures against those who would be human sharks be cast aside.

A final point. The foreign ministers of India and Bangladesh, meeting in Delhi, have reaffirmed their commitment to mutually beneficial cooperation on the rivers flowing from and into their countries. With India's north-east too taking a battering from the floods, a joint approach to floods, to dredging, to flow of water that guarantees the survival and happiness of the people of the two countries is today a critical issue in need of a rapid response.