Youngsters brainstorm how the world can be made safer for women 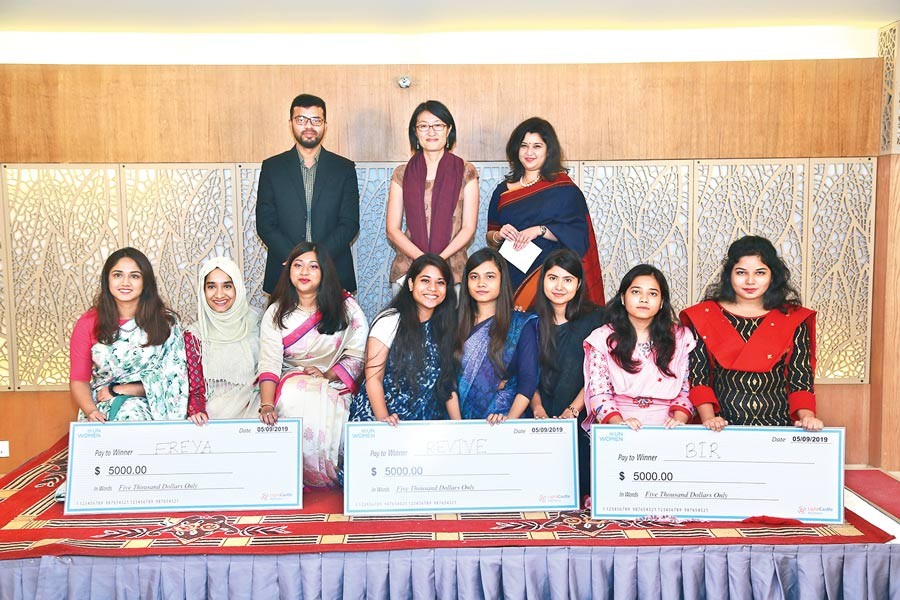 Violence against women and girls is one of the most prevalent human rights violations in the world. It knows no social, economic or national boundaries. At present, when the talks about rights and equality in terms of gender, consent and progress in terms of gender rights have engaged us in debates, it is imperative all act on it. With the purpose of providing women innovators the platform to combat gender inequality and encourage women's empowerment, in March 2019 UN Women initiated ‘Innovators against Gender Based Violence (GBV) Competition’.

Supported by Global Affairs Canada, UN Women seeks innovators with ground-breaking ideas and solutions to empower women, especially within the area of preventing and eliminating violence against women. The competition was open to only women, between 18 and 35 years old, in order to give them opportunities to find innovative solutions to prevent and end violence against women.

The competition closed on April 30, with 75 applications from all over the country. The applications were shortlisted, and 11 finalists were selected in July 2019. In the preliminary stages participants underwent a boot camp and pre-incubation workshop to polish their ideas and enhance their technical knowledge. On September 05, 2019, the Pitch Day of the 'UN Women against Gender Based Violence' was held at Lakeshore Hotel Gulshan, Dhaka. 11 teams with 24 astute young women presented their innovative ideas to prevent gender-based violence in front a three-member jury. The jury panel consisted of Shoko Ishikawa, country representative of UN Women Bangladesh, Zareen Mahmud Hosein, founder of HerStory Foundation and M Asif Rahman, founder and CEO of AR Communications.

The evening began with each of the 11 teams pitching their ideas to the judges. Each team was assigned five minutes to present after which the floor was open for a question and answer session. The presentations were full of various objectives and propositions to decrease, prevent and fully diminish gender based violence.

While some speakers heavily stressed application of technology, some addressed the need to create awareness using innovative methods as stage drama or cartoon sketches while others believed if the core reason of discrimination between different genders are identified, GBV can be stopped.

As the evening unwrapped, guest speaker Zaiba Tahyya, founder of Female Empowerment Movement (FEM), encouraged the participants with anecdotes of her own journey. Sharing her own struggles as she set out to initiate "Project Attorokkha", a self defense class dedicated for the slum dwelling women of Dhaka, she stated, "People said I could not change the mentality of people and I took that as my core challenge".

Shoko Ishikawa, country representative of UN Women Bangladesh, also stressed the significance of preventing Gender Based Violence, "If we cannot stop the violence before it starts, we cannot really break the cycle," Shoko stated. As one of the teams presented the idea of raising awareness through traditional theatres, she pointed that in this era of technologically innovative ideas, these traditional approaches were praiseworthy.

LightCastle Partners (LCP) has partnered with UN Women to provide technical support including implementation of the competition, incubation support to the winning team and launching of the winning ideas-- scheduled to be held at the end of November.

The winning teams will receive incubation support from LightCastle Partner in the upcoming month and a seed fund of US$ 5,000. At the end of the incubation period, the refined ideas will be launched at Cumilla University to work in the areas of Bangladesh where discrimination is higher and unprotested for.

The writer completed BSc in Economics and Finance from North South University. She can be reached at ainy.nihad@gmail.com