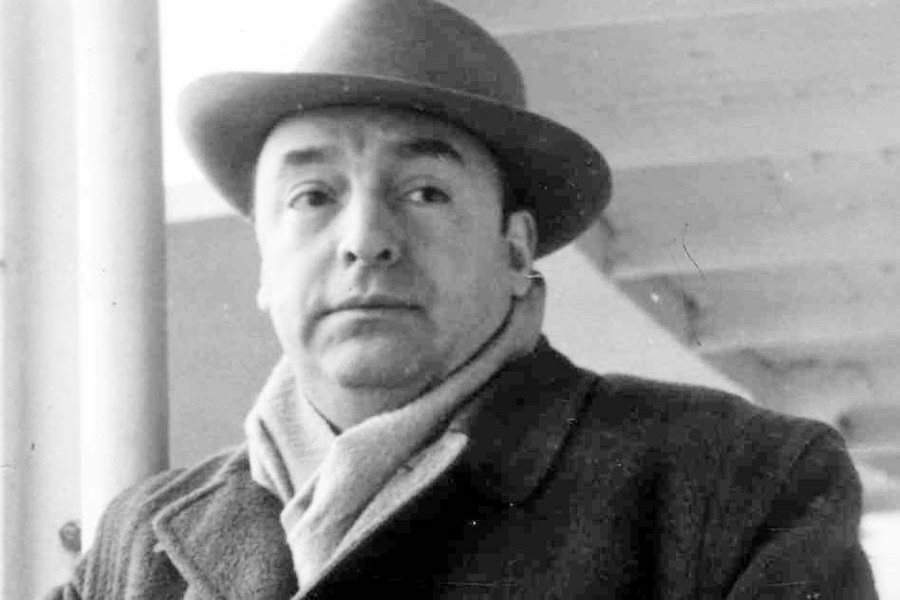 September 23 last was marked by the 44th death anniversary of Nobel literature prize laureate Pablo Neruda. Born on July 12, 1904, he bade the world bye on this day in 1973. Pablo Neruda was the poet's pen name and later the legal name. The Chilean poet and politician's original name was Neftalí Ricardo Reyes Basoalto. He chose his pen name after Czech poet Jan Neruda.

Neruda wrote in a variety of styles such as erotically charged love poems as in his collection Twenty Poems of Love and a Song of Despair, surrealist poems, historical epics, and overtly political manifestos.

In 1971 Neruda won the Nobel Prize for Literature. Colombian novelist Gabriel García Márquez once called him "the greatest poet of the 20th century in any language." Neruda always wrote in green ink as it was his personal colour of hope.

"There are reasons to remember Neruda. In him, factors were combined that constitute modern man. He wrote profound verses. He was a cultured man at home, linked with traditions that make up the mosaic of life," states local columnist and journalist Syed Badrul Ahsan speaking elaborately on Neruda's political and poetic life at a programme held in Dhaka marking the occasion. The seminar on 'An Ode to Neruda' was organised by the English Club of Notre Dame University Bangladesh (NDUB) in memory of the poet. Vice Chancellor of NDUB, Fr Patrick Gaffney, and Registrar Fr Adam S Pereira, also spoke on the occasion as special guests.

The NDUB English Club (NDUBEC), the host of the event introduced Neruda to the audience in brief. Only at the age of 19, this Chilean poet Neruda was a household name in Latin America.

At the event Syed Badrul Ahsan recited some of the verses from Neruda's poems, for instance, "I want to do with you what spring does with the cherry trees," to give an example how strong and effective Neruda's imageries and metaphors are.

After his lecture, NDUBEC members stage plays on Neruda's poems, for the first time in Bangladesh, directed by the co-moderator of English Club and Lecturer of English Department -- Ahmed Tahsin Shams.

The performers glimmering in the spotlight mesmerised everyone in the audience which was full to the brim with chemistry and melancholy at the same time.

Neruda's poetic narrative was deconstructed and contextualised in the performances. One of the famous poems by Neruda named 'If You Forget Me', performed by Jarin Tasnim and Issack Halder, students of CSE and BBA respectively, was staged in a way as if two characters were in a conversation beside a lakeshore on a moonlit night, where the woman went beyond the archetype feminine notions, yet romantic.

The next performance 'Tonight I Can Write the Saddest Lines', performed by Shahrear Amin Rafi, Arnab Pial and Md Saifuddin Al Quaderi, presented the universal melancholy in love through three different characters sharing their tales through triologue.

The plays were directed by Lecturer of the Department of English Language and Literature Ahmed Tahsin Shams. It was cinematographed by Alex Romario and Rayhan Robin, stage lighting was assisted by Shimanto Barua, background sound by Sanjoy Kumar Barman and Rasel Ahmed, audio recording of the performances was done by Lal Tewari, members of NDUBEC.

Neruda was a close advisor to Chile's socialist President Salvador Allende. When Neruda returned to Chile after his Nobel Prize acceptance speech, Allende invited him to read at the Estadio Nacional before 70,000 people.

Neruda was hospitalised with cancer at the time of the coup d'état led by Augusto Pinochet but returned home after five days when he suspected a doctor of injecting him in the stomach with an unknown substance for the purpose of murdering him at the order of Pinochet.

Neruda died in his house in Isla Negra on September 23 1973 six and a half hours after that injection. Although it has always been reported that he died of prostate cancer or heart failure, on November 5, 2015 the Interior Ministry of the Chilean government issued a statement acknowledging a ministry document indicating the government's official position that "it was clearly possible and highly likely" that he was killed as a result of "the intervention of third parties".

Pinochet, backed by elements of the armed forces, denied permission for Neruda's funeral to be made a public event. However, thousands of grieving Chileans disobeyed the curfew and crowded the streets.