The incident appears to be 'intentional', says Khalid Mahmud 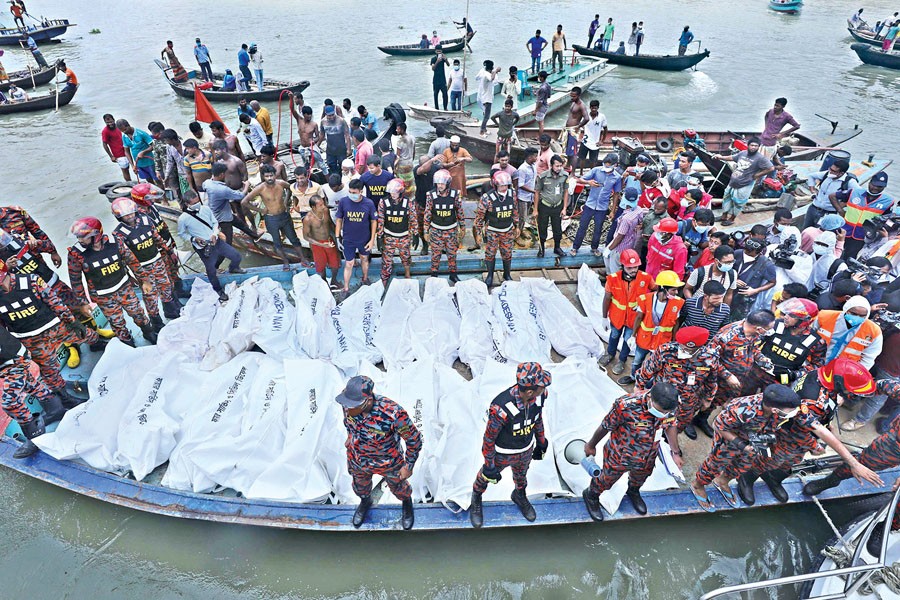 At least 32 people died when a small passenger vessel named ML Morning Bird sank within minutes on Monday morning near the Sadarghat launch terminal of the Buriganga River in Dhaka when another large vessel---Moyur-2--- rammed into it from the behind.

Bodies of 19 males, eight females and three children have so far been recovered, Shahadat Hossain, a duty officer of Fire Service and Civil Defence, told the FE.

Morning Bird, which was coming to Dhaka from Munshiganj, capsized in the river after it was hit by Moyur-2 at around 9:30am, said fire service headquarter duty officer Shahadat Hossain.

The bodies recovered from the spot were sent to Mitford hospital morgue for completing further legal procedures. Most of the victims were identified and handed over to the families, he said.

According survivors, there were around 60 to 70 passengers on board the launch.

However, about 50 people were on board when the launch sank as some of them managed to swim to the shore, he added

As seen in video footage aired by private TV channels, two launches were moving ahead side by side, remaining in close proximity. But, all on a sudden, the MV Moyur-2 hit the Morning Bird from the behind and ploughed through it.

BIWTA has formed a four-member probe body to investigate the accident.

The four-member BIWTA committee, headed by Joint Director Joynul Abedin, will submit the report within 72 hours.

Meanwhile, the Shipping Ministry has formed a seven-member inquiry committee with Joint Secretary (Development) of the Ministry of Shipping Md Rafiqul Islam Khan as the convener and Director (Shipping) of BIWTA Md Rafiqul Islam as the member-secretary.

The ministry issued an office order in this connection on Monday, according to a statement.

The committee will submit a report to the Ministry of Shipping within the next seven days.

The committee will make specific recommendations by detailing the cause of the accident, identifying the person or organisation responsible for the accident and the steps needed to be taken to prevent such riverine accidents.

BIWTA Joint Director AKM Arif Uddin told The Financial Express that they have found the drowned launch and tied it up with rope. Attempt will be made to salvage the sunken vessel using traditional method as the BIWTA's salvage vessel 'Protoy' could not reach the accident spot because of lack of clearance under the Buriganga Bridge-1 at Postagola. The vessel rather caused damage to the bridge and also to its own upper part while trying to cross the bridge

No case was filed until filing of this report at 7:15 pm, said duty officer of South Keraniganj Police Station.

The duty officer also said the master and other staff members of the launch managed to flee, but the BIWTA seized Moyur-2.

He said they will later file a case in this connection.

State Minister for Shipping Khalid Mahmud Chowdhury said that the incident seemed to be orchestrated in a planned way.

"This is totally different from other incidents. I have seen the CCTV footage and after watching it, it appears to me that the incident was carried out intentionally. It seemed to be murder," he told reporters after visiting the spot at around 3:30pm.

Mr Mahmud said his ministry has formed a seven-member committee led by a joint secretary and the committee has been asked to submit a report within a week.

"We will take necessary legal action following the investigation," he said.

The minister said they will provide Tk 10,000 to each family for burial and Tk 1.5 lakh as compensation.

The Bangladesh Passengers' Welfare Association has demanded immediate rescue of the victims, their medical treatment and a suitable compensation for them, among others, in connection with the accident.

The organisation's Secretary-General Mozammel Haque made the demands in a statement.