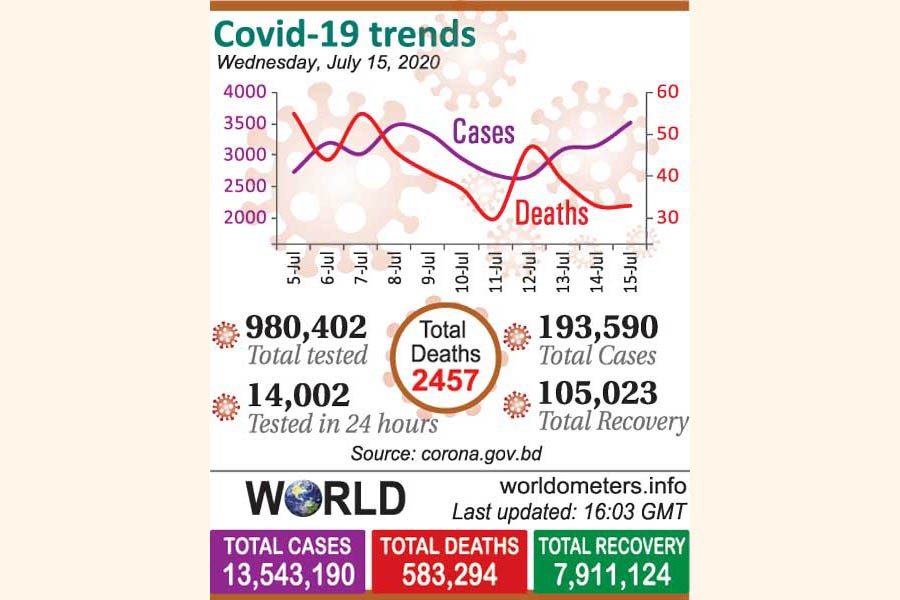 More 33 people died of coronavirus disease (Covid-19) in the 24-hour period until Wednesday morning, taking the total tally to 2,457 in the country.

So far 1,93,590 people have been diagnosed positive with the novel coronavirus, including fresh 3,533 detections in the period - significantly higher from the previous day.

The figures were revealed at the regular virtual briefing of Directorate General of Health Services (DGHS).

According to the briefing, 1,796 people recovered from the disease on the day, taking the total figure to 1,05,023.

The overall rate of recovery against infection is 54.3 per cent.

Among the deceased, 16 were from Dhaka, seven from Chattogram, two from Rajshahi, five from Khulna and three from Rangpur division.

Currently, 79 laboratories are equipped with coronavirus test facilities, the briefing was told.

Ms Sultana also said everyone should abide by the health guidelines to help minimise the risk of infection.

Globally, over 13.4 million people were infected with the deadly virus and 5,82,125 died until Wednesday 6:00 pm, according to data available with Worldometer, an information portal.

According to it, Bangladesh is the 17th worst victim globally, after Germany with 2,00,766 cases and followed by France with 1,72,377 cases.

Among Asian nations, Bangladesh is the sixth hardest-hit one by the viral disease. Neighbouring India tops the list followed by Iran, Pakistan, Saudi Arabia and Pakistan.