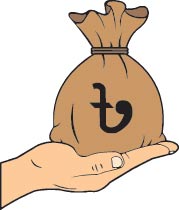 The Finance Minister was talking to reporters at the Finance Division conference room at Bangladesh Secretariat. National Board of Revenue (NBR) Chairman Md Mosharraf Hossain Bhuiyan was present.

He said initially the idea of launching the savings certificates was noble and it was to help the marginalised people who are not solvent.

"But, we found that the savings certificates are being misused as many are enjoying benefits after opening various accounts in different banks without providing proper names and addresses. We also found that the rich class is enjoying its benefits more instead of the marginalised people."

Mentioning that the existing scheme for the pensioners would remain intact, Kamal said that the tax rate would be 10 per cent in case of the savings certificates over Taka 0.5 million.

"We want to run the savings certificates much more transparently since this is a strong area of the country's economy," he said adding that the government would later consider raising the ceiling of 5 per cent tax if it is deemed insufficient.

Like India, the Finance Minister said the government is planning to launch here the bond market as an alternate source of investment for the small savers.

Answering a question, he said that the investors would not be subjected to harassment in case of their investment in the bond market and they would get their interests in every six months to one year.

Kamal said it is yet to be finalised and work is going on to enact a law on bond. He also informed that the government will have a database in place to properly monitor the savings certificates.

Earlier in the budget for fiscal year 2019-20, the government increased the tax at source on the profit on savings certificate to 10 per cent from previous five per cent.

The Finance Minister also informed that the announced 2 per cent cash incentive on inward remittance would become effective from July 1 this year.

He said the budget for current fiscal year has already incorporated this provision, but the system is yet to be developed which would take two to three months more.

Assuring the expatriate Bangladeshis and remitters that 2 per cent cash incentive would be applicable to the amount remitted by them from July 1, the Finance Minister encouraged the remitters to send money to their near and dear ones before the ensuing Eid-ul-Azha through legal channel and thus get the cash incentive.

"Once the system is developed, 2 per cent cash incentive on flat rate would automatically become effective while the remitters would have no chance to be deprived of," he added.

Replying to another question, the Finance Minister said the Bangladesh Bank would come up with a circular in this regard within the next two months and no tax is imposed on the remitted money.