Economic shocks loom from inside, outside 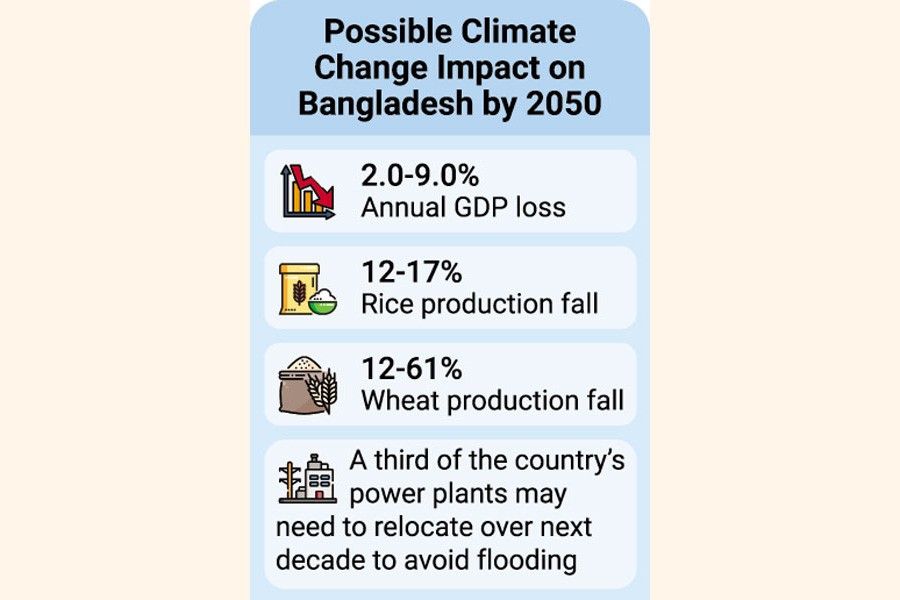 Agriculture and industry both may bear the brunt as climate change could compel Bangladesh to endure extreme heat and humidity, and sea-level rise, a latest IPCC report predicts.

It says climate change will hit international supply chains, markets, finance, and trade, reducing the availability of goods in Bangladesh, and increasing their price, as well as damaging markets for Bangladeshi exports.

Economic shocks caused by climate change, including reduced agricultural yields, damage to critical infrastructure, and commodity price rises, could lead to financial instability in the country.

Unremitting sea-level rise could force millions from their homes, says the UN climate panel in its global forecast that quantifies tentative economic cost this deltaic nation could count for little contribution of its own to the global climate change.

The report projects a loss of 2.0 per cent to 9.0 per cent of annual Gross Domestic Product (GDP) by middle and end of the century owing to climate change, caused by excessive Greenhouse gas emissions mostly from highly industrialised countries.

According to the report, parts of the country would lose 31 per cent to 40 per cent of agricultural output this century to sea-level rise alone because of current state of emissions. And a third of the country's power plants may need to be relocated over the next decade to avoid flooding from sea-level rise.

As result of climate calamities and increasing demand for water, about 25 per cent of people in Bangladesh will live with water scarcity by 2050, compared with about 10 per cent now. Both the Ganges and Brahmaputra river basins will also see increased flooding as a result.

Climate change will hit international supply chains, markets, finance, and trade, reducing the availability of goods in Bangladesh, and increasing their price, as well as damaging markets for Bangladeshi exports.

Economic shocks caused by climate change, including reduced agricultural yields, damage to critical infrastructure, and commodity price rises, could lead to financial instability in the country.

Dr Rawshan Ara Begum, one of the coordinating lead authors of the report, said, "This report iterated that Bangladesh is one of the most vulnerable countries in the world due to climate change and sea-level rise with projecting a loss of GDP."

And a large number of people of southern part of the country are at a risk of displacement and declining food crops production, according to her.

"This will further worsen the country's current challenges, including extreme poverty, income inequality, economic and non-economic losses and damages and low adaptive capacity," she says.

"In Bangladesh, some communities, for example, small and landless farm households, are already approaching soft limits to adapt to riverbank erosion."

With further global warming of 1.5C, additional adaptation limits will emerge. To avoid increasing losses and limits, urgent and accelerated action is required to adapt to climate change, while making rapid and deep cuts in greenhouse gas emissions, she notes.

"There is evidence that poor and least-developed households, communities, and countries who are most affected and marginalized by climate change, and least responsible for its causes, receive relatively little financial support for adaptation," says Dr Rawshan.

Bangladesh is a real example of this, she says. International climate financing needs more attention to adaptation finance for managing climate risks in least developed and many developing countries.

This report informs scientific evidence of climate-change impacts and potential risks, as well as provides a range of adaptation options for reducing vulnerability and enhancing resilience.

Md Arfanuzzaman, one of the lead authors of the IPCC report, said: "The climate-change impacts Bangladesh is facing today will increase substantially in the coming years. It is very likely that most of our existing adaption would be ineffective under both 1.5 and 2C warming conditions."

To reduce socioeconomic and environmental vulnerability and build resilience Bangladesh must focus on transformative and multi-sectoral adaptations, Mr Zaman suggests.

The UN panel report points out that Bangladesh is among the places that will experience intolerable heat and humidity unless carbon emissions are rapidly eliminated.

If emissions continue to rise, parts of Bangladesh would exceed the threshold where heat and humidity becomes survivable for humans towards the end of this century.

"As climate change is a global threat and inequality is a global phenomenon, as a citizen of a vulnerable country, I have hopes to global leaders for urgent, accelerated action to adapt to climate change, while making rapid, deep cuts in greenhouse gas emissions," she says.

Policy researchers, taking a cue from the UN agency findings and forecasts, suggest that the government update its policies and programmes in that light as climate impacts are already in sight.

Talking to the FE, Dr Khondaker Golam Moazzem, research director at the Centre for Policy Dialogue (CPD), said the impact of climate change has already been visible in the southern part of the country.

"This report has specified the climate-change impacts and potential risks on the economy and people of Bangladesh. So, the policymakers should rethink and redesign the development strategy for coming days," he says.

He especially terms the impact on agriculture sector a cause of anxiety as the government had a plan to be self-sufficient in rice production.

"In this situation, the import-dependency for rice could increase in future," the CPD director notes.