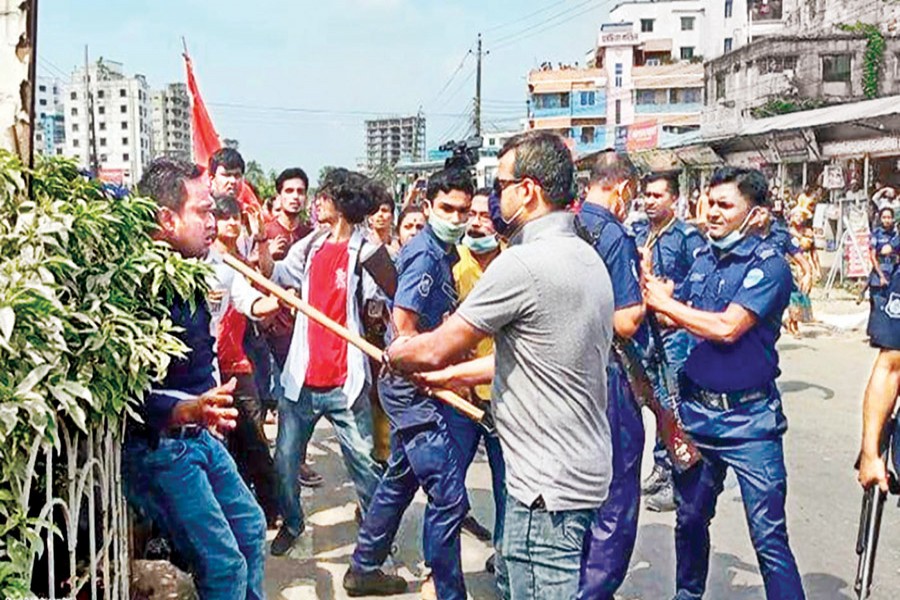 Armed with sticks, a group of youths attack anti-rape activists when their long march reached Feni on Saturday on its way to Noakhali from Dhaka to press for their nine-point demand — Focus Bangla

FENI, Oct 17 (UNB): A long march protesting the growing incidents of rape, sexual harassment and violence against women, came under attack in Feni injuring 20 people including journalists on Saturday.

Some miscreants attacked the march in the Shaheed Minar area at around 11:30am.

The leaders of left leaning organisations who organized the march blamed local Awami League and Jubo League leaders for the attack.

Witnesses said agitation started after the protesters chanted anti-government slogans and wrote "protector of rapists" on a festoon with the picture of Nizam Hazari at Doel Chattar.

Miscreants attacked the long march when it was heading towards Eklashpur area of Begumganj.

The second attack was launched in front of the Nirman Super Market.

Dozens of people including Jahirul Haque, correspondent of Ekattor television, and camera person Saju were injured.

The march began from Shahbag around 10:30am on Friday. The protesters including left-leaning parties, students, youths and rights activists, started their long march under the banner of "Dhorshon O Bicharhinotar Biruddhe Bangladesh" (Bangladesh against rape and impunity) to press home a nine-point demand.

Their demands include ensuring exemplary punishment of the perpetrators involved in rape and violence against women, resignation of the home minister and an end to repression of women.

Protests against rape and violence against women erupted across the country since the beginning of October, following the recent incidents of gang rape in Sylhet's MC College and in Noakhali's Begumganj upazila.