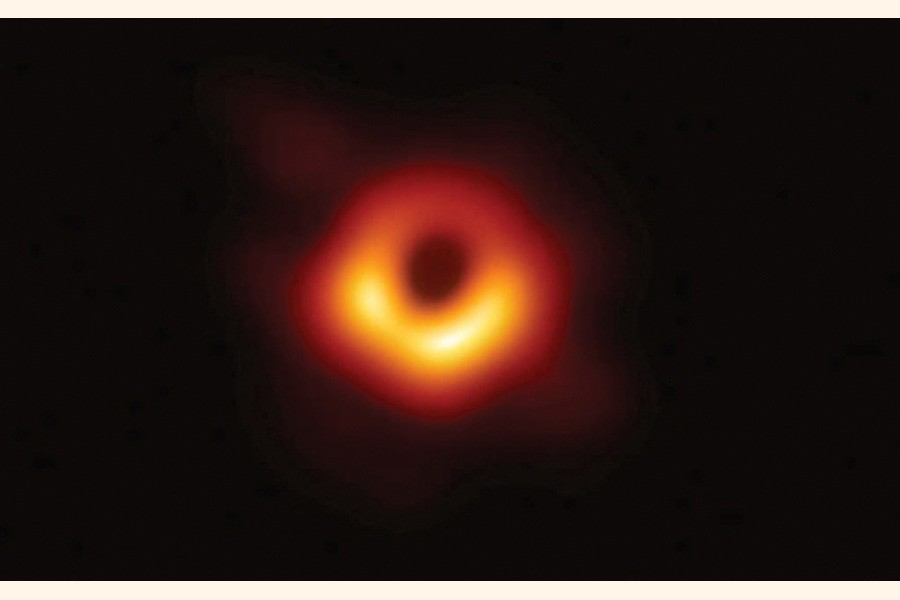 The first-ever photograph of a black hole, taken using a global network of telescopes, conducted by the Event Horizon Telescope (EHT) project, is shown in this handout photo on Wednesday — Reuters

An international scientific team announced on Wednesday a milestone in astrophysics -- the first-ever photo of a black hole -- using a global network of telescopes to gain insight into celestial objects with gravitational fields so strong no matter or light can escape, report agencies.

The research was conducted by the Event Horizon Telescope (EHT) project, an international collaboration begun in 2012 to try to directly observe the immediate environment of a black hole using a global network of Earth-based telescopes.

The announcement was made in simultaneous news conferences in Washington, Brussels, Santiago, Shanghai, Taipei and Tokyo.

The image reveals the black hole at the centre of Messier 87, a massive galaxy in the nearby Virgo galaxy cluster.

This black hole resides about 54 million light-years from Earth.

A black hole's event horizon is the point of no return beyond which anything - stars, planets, gas, dust and all forms of electromagnetic radiation - gets swallowed into oblivion.

"This is a huge day in astrophysics," said US National Science Foundation Director France Córdova. "We're seeing the unseeable."

The fact that black holes do not allow light to escape makes viewing them difficult.

The scientists look for a ring of light -- disrupted matter and radiation circling at tremendous speed at the edge of the event horizon -- around a region of darkness representing the actual black hole.

This is known as the black hole's shadow or silhouette.

The project's researchers obtained the first data in April 2017 using telescopes in the US states of Arizona and Hawaii as well as in Mexico, Chile, Spain and Antarctica.

Since then, telescopes in France and Greenland have been added to the global network.

The global network of telescopes has essentially created a planet-sized observational dish.

Most speculation had centred on the other candidate targeted by the Event Horizon Telescope-Sagittarius A*, the black hole at the centre of our own galaxy, the Milky Way.

Locking down an image of M87's supermassive black hole at such distance is comparable to photographing a pebble on the Moon.

It was also a team effort.

Over several days in April 2017, eight radio telescopes in Hawaii, Arizona, Spain, Mexico, Chile, and the South Pole zeroed in on Sag A* and M87.

Knit together "like fragments of a giant mirror," in Bremer's words, they formed a virtual observatory some 12,000 kilometres across-roughly the diameter of Earth.

In the end, M87 was more photogenic. Like a fidgety child, Sag A* was too "active" to capture a clear picture, the researchers said.

"The telescope is not looking at the black hole per se, but the material it has captured," a luminous disk of white-hot gas and plasma known as an accretion disk, said McNamara, who was not part of the team.

"The light from behind the black hole gets bent like a lens."

The unprecedented image-so often imagined in science and science fiction --- has been analysed in six studies co-authored by 200 experts from 60-odd institutions and published Wednesday in Astrophysical Journal Letters.

"I never thought that I would see a real one in my lifetime," said CNRS astrophysicist Jean-Pierre Luminet, author in 1979 of the first digital simulation of a black hole.

Coined in the mid-60s by American physicist John Archibald Wheeler, the term "black hole" refers to a point in space where matter is so compressed as to create a gravity field from which even light cannot escape.

The more mass, the bigger the hole.

At the same scale of compression, Earth would fit inside a thimble. The Sun would measure a mere six kilometres edge-to-edge.

A successful outcome depended in part on the vagaries of weather during the April 2017 observation period.

"For everything to work, we needed to have clear visibility at every [telescope] location worldwide", said IRAM scientist Pablo Torne, recalling collective tension, fatigue and, finally, relief.

Torne was at the controls of the Pico Veleta telescope in Spain's Sierra Madre mountains.

After that, is was eight months of nail-biting while scientists at MIT Haystack Observatory in Massachusetts and the Max Planck Institute for Radio Astronomy in Bonn crunched the data.

The Universe is filled with electromagnetic "noise", and there was no guarantee M87's faint signals could be extracted from a mountain of data so voluminous it could not be delivered via the Internet.

There was at least one glitch.