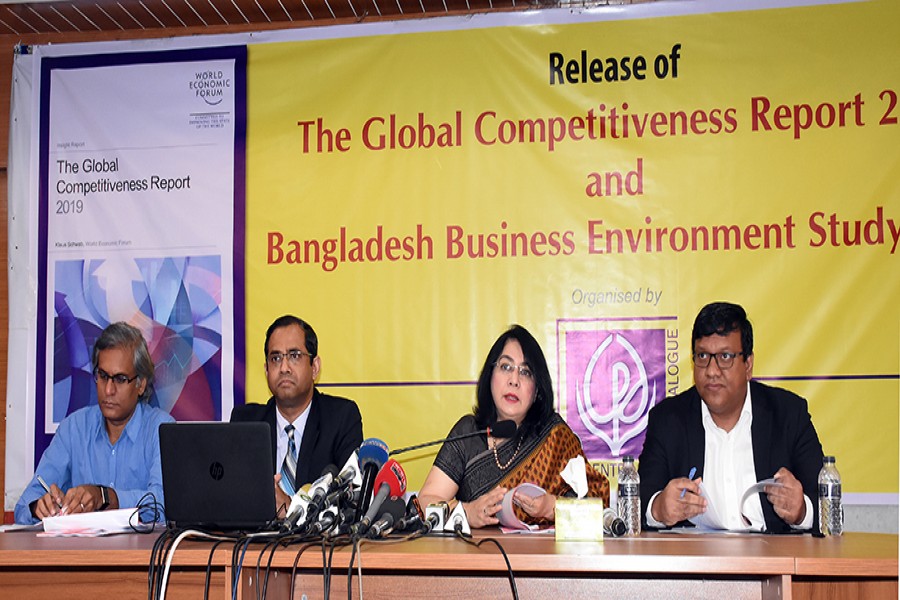 Most businesses consider that complications in banking sector will continue to affect domestic trade and business this year, reveals a new business environment survey.

Some 78 per cent of respondents aired concerns over the impact on business while 80 per cent projected a further deterioration in money-laundering situation.

The Centre for Policy Dialogue (CPD) disclosed the findings of the study styled 'Bangladesh Business Environment Study 2019' at Economic Reporters' Forum in the capital on Wednesday.

Research director Dr Khondaker Golam Moazzem of the leading local think tank presented the report on the sidelines of the publication of the latest Global Competitiveness Index (GCI).

In this year's GCI, Bangladesh ranked 105th among 141 countries, slipped by two notches.

Mr Moazzem said inflation and lending rates were costlier in doing business for respondent companies in the first half of fiscal year (FY) 2019 than that of FY 2018.

Employment and production also slowed down during the period under review, he added.

The last one is the weakening of macroeconomic stability, Mr Moazzem added.

"Businesses are increasingly dominated by a few groups of companies and the situation has been worsening as the trend is quite visible in commodity market like rice, edible oil and sugar."

Enforcing 'The Competition Act' properly, Mr Moazzem said, businesses need to make open and competitive for all categories of entrepreneurs, particularly for MSMEs and new entrants in businesses.

However, 47 per cent expressed positively that business environment in 2019 would improve.

The number of respondents was 93 last year.

Citing businessmen's scepticism about full enforcement of the Value-Added Tax and Supplementary Duty Act 2012 as of July 2019, he said the implementation of the act is slow.

The businesses are deprived of the benefits from key fast-track infrastructure projects due to slow progress in its implementation, he added.

Those polled said start-up businesses would somewhat grow in 2019 as the government has allocated Tk 1.0 billion for them in the national budget this fiscal.

Around 50 per cent of the businesses perceived that technological changes in manufacturing sector would lead to more unemployment in 2019.

Around 56 per cent businesses also observed moderate improvement in the tax system.

But they did not see any significant changes in the case of monitoring and supervising the Securities and Exchange Commission and the Bangladesh Bank (BB).

Besides, businessmen expressed a mixed reaction to the impact of current global changes in economic and technological issues.

They said Brexit would cause a somewhat negative impact on the economy while Bangladesh would benefit from the US-China trade war.

About the ongoing anti-graft drive against casino operators and tender manipulators, Mrs Khatun said CPD supports such a move as corruption eats up the country's GDP.

She said corruption at different levels destroys the level-playing field for businesses that want to ply their trade in a transparent way.

GCI is included in the Global Competitiveness Report-the flagship publication of the World Economic Forum, where CPD is the partner organisation that conducts the Bangladesh chapter of the study.

According to the report, Bangladesh's weakest positions are in four pillars of the index-business dynamism (121st), labour market (121st), product market (119th) and skills (117th).