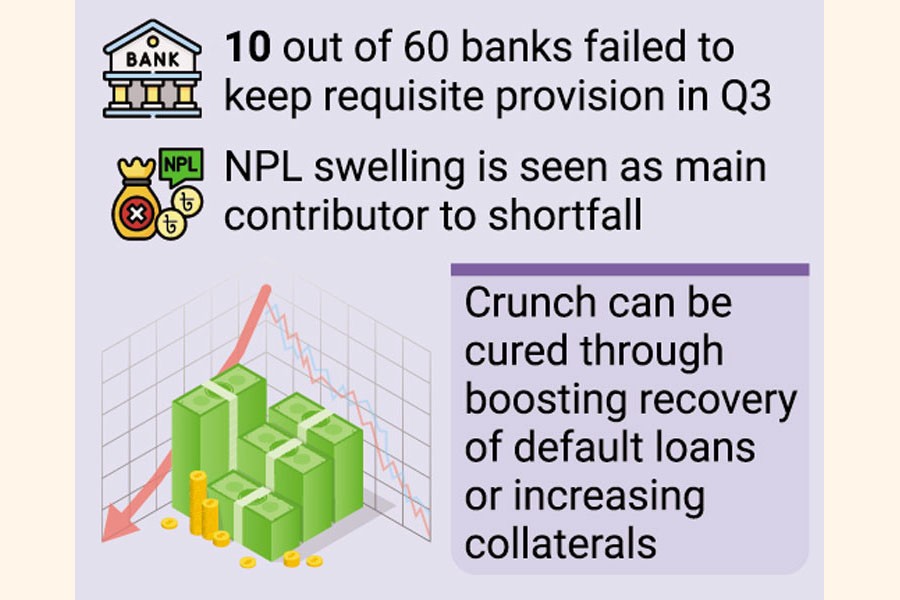 Provision shortfall against loans, particularly classified ones, in Bangladesh's banking system marked a steep fiftyfold rise during the first nine months of the current calendar year.

The aggregate amount of provisioning shortfall jumped to Tk 62.04 billion, over 50 times higher, as on September 30, than the level of only Tk 1.23 billion by the end of last year, according to the central bank's latest statistics.

Talking to the FE, senior officials of Bangladesh Bank (BB) said the volume of provision shortfall increased significantly during the period under review mainly for an upturn in non-performing loans (NPLs) in the banking sector.

"Some court stay orders regarding loan classification have already been vacated that have also pushed up the provision requirements during the period under review," a BB senior official said while explaining the latest situation on provisioning crunch.

All the scheduled banks usually keep requisite provisions against both classified and unclassified loans from their operating profits in a bid to mitigate financial risks, according to the central banker.

The provisioning shortfall of three SoCBs pushed up the overall shortfall in the banking system during the period under review, according to the central bank reports.

However, 10 banks out of 60 failed to keep requisite provisions against loans, particularly classified ones, in the third quarter (Q3) of this year.

Of them, four are SoCBs, one specialized and others are PCBs.

During the final quarter of 2020, 11 banks had failed to maintain the required provisioning against their loans.

The combined shortfall of these banks was at Tk 67.46 billion at the end of the last calendar year.

"The banks may reduce their provisioning shortfall through boosting recovery of default loans or increasing eligible collaterals against the credits," another BB official said to a query about possible way-out.

He also said the scheduled banks will have to maintain due provisioning against all types of loans to protect the interests of depositors.

Echoing the BB official's view, the managing director and chief executive officer of a PCB said higher NPLs are mainly responsible for the provision shortfall.

The senior banker suggested the banks should improve their asset quality for lowering the provisioning requirements.

"Provisioning shortfall is a negative indicator for the country's banking system and indicates that some banks need more capitalization," Shah Md. Ahsan Habib, professor and director at Bangladesh Institute of Bank Management (BIBM), said in reply to a query.

He also said it should be addressed immediately.