Bangladesh has slipped two spots, dropping to the 105th as competitive economy in an index produced by the World Economic Forum (WEF). 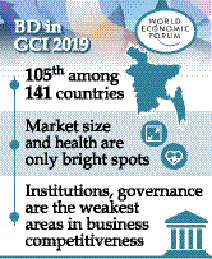 The country's competitiveness has declined in 10 out of 12 pillars, according to the report unveiled by the Centre for Policy Dialogue on behalf of the Forum in Dhaka on Wednesday.

The country has done well in only two pillars-product market and health-though the overall score of Bangladesh has remained unchanged at 52.1 in 2019 like in the last year.

The country's position is 109th for institutions; 114th for infrastructure; 108th for ICT adoption; 95th for macroeconomic stability; 93rd for health; 117th for skills; 119th for product market; 121st for labour market; 106th for financial system; 36th for market size; 121st for business dynamism; and 105th for innovation.

The global competitiveness index means the ability of a country to achieve sustained high rates of economic growth in per capita GDP. Bangladesh's per capita income now stands at US$1,744.5.

The report said the 10-year average annual GDP growth stands at 5.9 per cent while the five-year average FDI inward flow as percentage of GDP is at 1.1 per cent.

The CPD said institutions and governance are the weakest areas in the business competiveness, where majority of indicators have deteriorated.

"Corruption has become a major burden on businesses, which has reduced competitiveness in both the local and global market," said Dr Khondaker Golam Moazzem, research director at the CPD.

He said the extent of corruption has further increased this year, which has squeezed the scope for doing business, especially by the new entrants.

Dr Moazzem also said Bangladesh position has fallen because other countries have advanced much faster than it has .

He said the country's business competitiveness is entangled with traditional and emerging challenges.

"The lack of improvement in governance and institutions, poor infrastructure, financial system and business operations are traditional perennial problems," he said.

"The lack of fourth industrial revolution technologies, the absence of necessary regulatory framework and skills are emerging concerns," he added.

Dr Fahmida Khatoon, executive director at the CPD, said unless proper attention is paid to the fourth industrial revolution, the country's competitiveness will continue to be eroded.

She said the country's trade and commerce remained concentrated in some big business groups or quarters. "If we could not come out of this situation, the end consumers will suffer," she warned.

She said many countries have enacted laws to prevent anti-competitive practices.

She also said corruption is a major hurdle for the country as it eats up a significant portion of GDP.

Singapore has topped the 2019 ranking, toppling the United States as the most competitive economy.

Hong Kong and the Netherlands made a significant improvement in their rankings by reaching the third and fourth positions respectively.Meanwhile, most of the south Asian countries have lost their previous positions except Sri Lanka and Nepal.

Sri Lanka and Nepal have improved by one position reaching the 84th and 108th respectively in 2019.

Chad is at the bottom ranking 141st.